Control PCBs are paired to their dongles on a X3?

EDIT: I just spent a whole day troubleshooting two X3s. Don't be an idiot like me. If your system isn't booting, start with removing your memory sticks and plugging in just one.

Seems I have managed to brick two X3s. I bought a faulty USFIV from YJ sometime back. I had hoped it would be a GPU or PSU issue. However, when I plugged it in, it booted normally and then threw a 0203: I/O INITIALISATION ERROR when loading the game. I thought it might have been a faulty control PCB (the board you plug the dongle into), so I swapped one in from a Lord of Vermilion IV I had. Plugging it in and I get no video signal at all from the system. No Type X3 logo, no nothing.

So I swapped the original control PCB back, but now the motherboard doesn't work with that either. Same problem, no video at all.

Sounds incredibly stupid. So I then tried LoV IV with the control PCB from USFIV. Same goddamn thing, no video. I put the original control PCB back in. Yup, that motherboard is bricked too. For the record, LoV IV was perfectly working before this.

What the hell. Was this common knowledge that you shouldn't swap control boards on these things and have I just missed the memo?
Last edited: Oct 22, 2020

I've got no info on how to fix or revive them for you though..

Yeah, it bricking the system caught me by surprise.

I wasn't aware of it either... I would not have expected that.

So they don't post at all now? Not even when you first turn them on? Just black screen?

Just a black screen, after a while it reboots.

What if you remove the control pcb and try to boot the X3? Try also removing the battery booting the system and then putting the battery back. ( after turning it back off again of course

This explains why I see so many X3 games listed that sell the HDD, dongle and control PCB as a set.

but this raises the question what's the point of having a dongle if you have to swap the control PCB too?

Niko said:
What if you remove the control pcb and try to boot the X3?
Click to expand...

It doesn't turn on at all. I think the control PCB bridges some pins so it turns on when power is applied? Does anyone know what pins they are exactly?

I haven't yet tried removing the battery. I guess I'll lose the security keys that are on the motherboard? I know, it's not an issue these days, but still.


twistedsymphony said:
but this raises the question what's the point of having a dongle if you have to swap the control PCB too?
Click to expand...

Exactly. Why the heck are they separate?

This is some motherboard.

I think you still need to use the video card to get video out, i think the onboard is completely disabled. But that might be cleared with the bios clear.

I know people are removing the hdd and just replacing them to tinker, I'm wondering how the hell adding another dmac/control card would cause a suicide of some sort. It just doesn't seem right.


If you remove the hdd, and the dmac card... there is no reason why the machine shouldn't post. I don't think the hardware is custom enough to have performed some sort of suicide. It should be posting. Even if the hdd key check from the bios doesn't match, it still should be at least posting.

Sorry to hear.. that sucks man

Are there pins on the motherboard for a PC speaker? Maybe you can get some troubleshooting beeps out of the thing at least. Very weird it got so non responsive with such an innocuous change.

Yeah, no kidding. If I only had the one motherboard I would say it's something else, but I have two that are both in similar state. That's some bad luck if swapping the control PCB was inconsequential.

Anyway, I tried booting it without the control PCB, but with the GPU installed. Still nothing.

dewmansnk said:
Are there pins on the motherboard for a PC speaker?
Click to expand...

EDIT: Nevermind, I'm an idiot. There's a speaker installed on the motherboard.

I removed all the memory sticks. It turns on when bridging the power switch pins, but does nothing else. No beeps, no nothing. I put in one memory stick, and I have the motherboard now booting to the Type X3 logo. It lives.

What you're describing happened, sounds like some sort of e-fuse protection. Like the downgrade firmware protection on the old xbox.

Almost like IF not matched items plugged in THEN blow fuse = rekt.

I just don't think this system has anything remotely like that.

At least it's booting again now. Curious to hear if you can make the original game play again with all the correctly matched parts plugged in.

It seems I had just extremely bad luck. I shuffled the memory sticks until I found the stick that made the motherboard not boot. I replaced that with a stick from the other motherboard. I then pieced together all the original parts for USFIV, and hey presto: 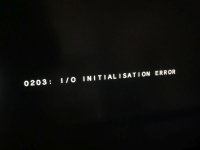 I'm back to square one.

I then switched the control PCB from the other motherboard and now I get a boot device error: 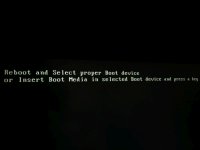 Switched it back, back to IO init error.

Let's see if I can get LoV IV booting.

LoV IV booting now as well. I have three bad memory sticks between the two motherboards. How does that happen, I have no idea. Spooky.

Thanks for reaffirming my belief that ultimately these are PCs and they should behave like it.

Now I'm going to turn off security on the LoV IV motherboard and drop USFIV on it.

At this point, i'm sure you are just thankful it's all working as it was before... minus a few rams sticks. Of all the things that could go bad, ram sticks are the best thing because they're the easiest to replace cheaply for those.

Glad to hear it's all working!

I think when you turn off the security on the LOV board, that's when you can't go back to the way it was before, then you're going to lose your marry up of keys between devices and the motherboard at that point.

I can live with that

By the way, all three 'bad' memory sticks started playing nice after cleaning the edge connectors.

Glad to hear that you got things working

I cleared CMOS by removing the battery and shorting the jumper, set security to OFF, booted a normal drive. Then cleared CMOS again, and booted the original ATA-locked drive.

So Type X3 isn't as stupid as the original Type X, which lost the keys when the battery died (Taito probably got a ton of shit for that).
You must log in or register to reply here.
Menu
Log in
Register
Install the app
Top