I recently put out a call for some CPS2 B Boards that were battery damaged, and I've received 2 so far. The first one I received is the one I've done the most work to so far. Here's what it looked like when I received it. 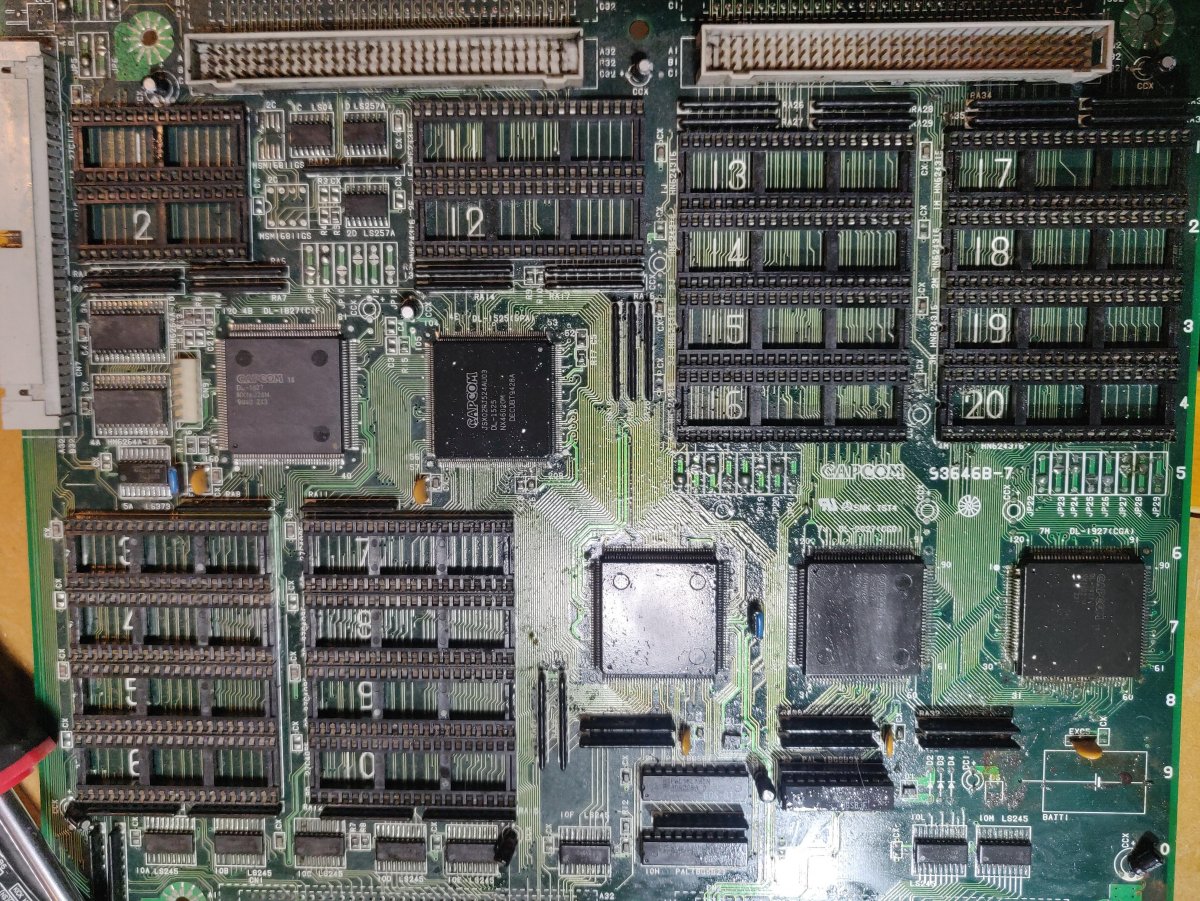 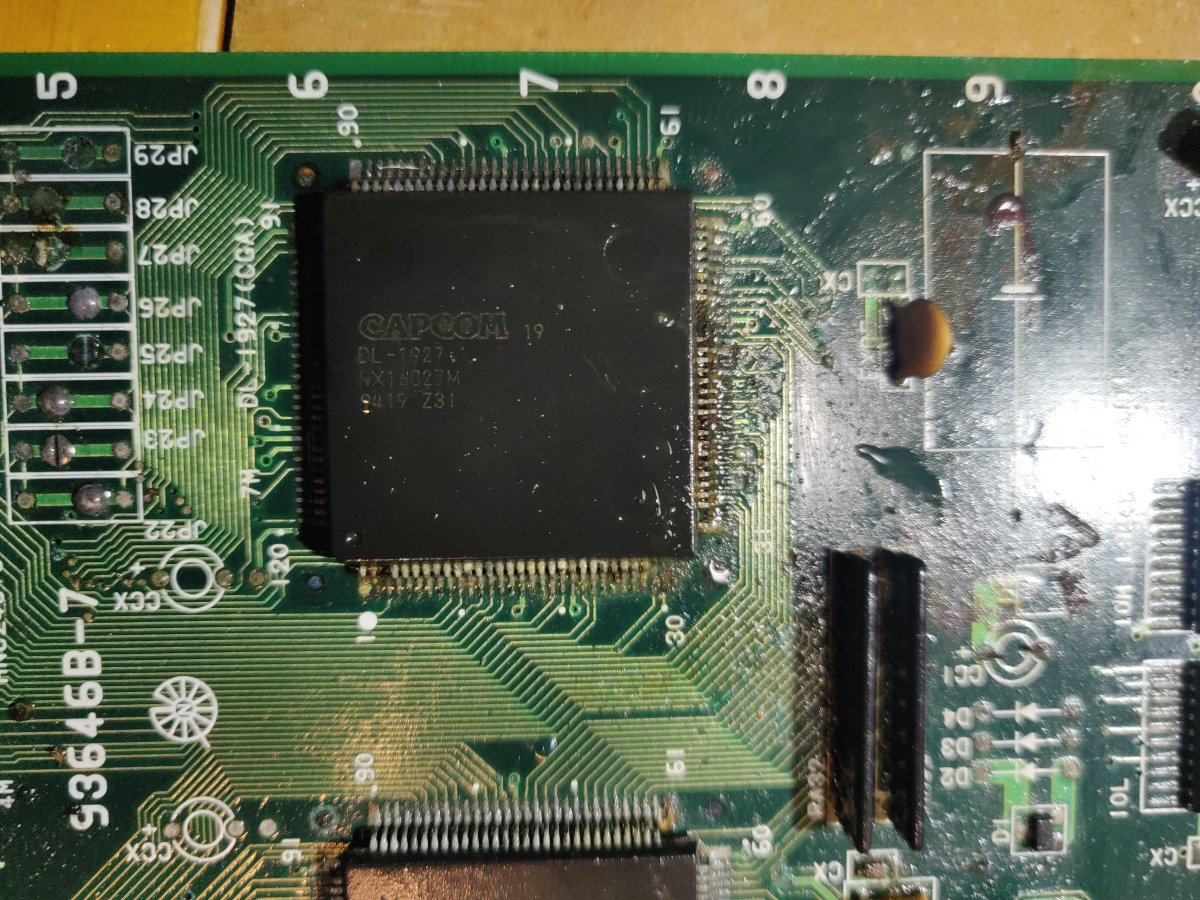 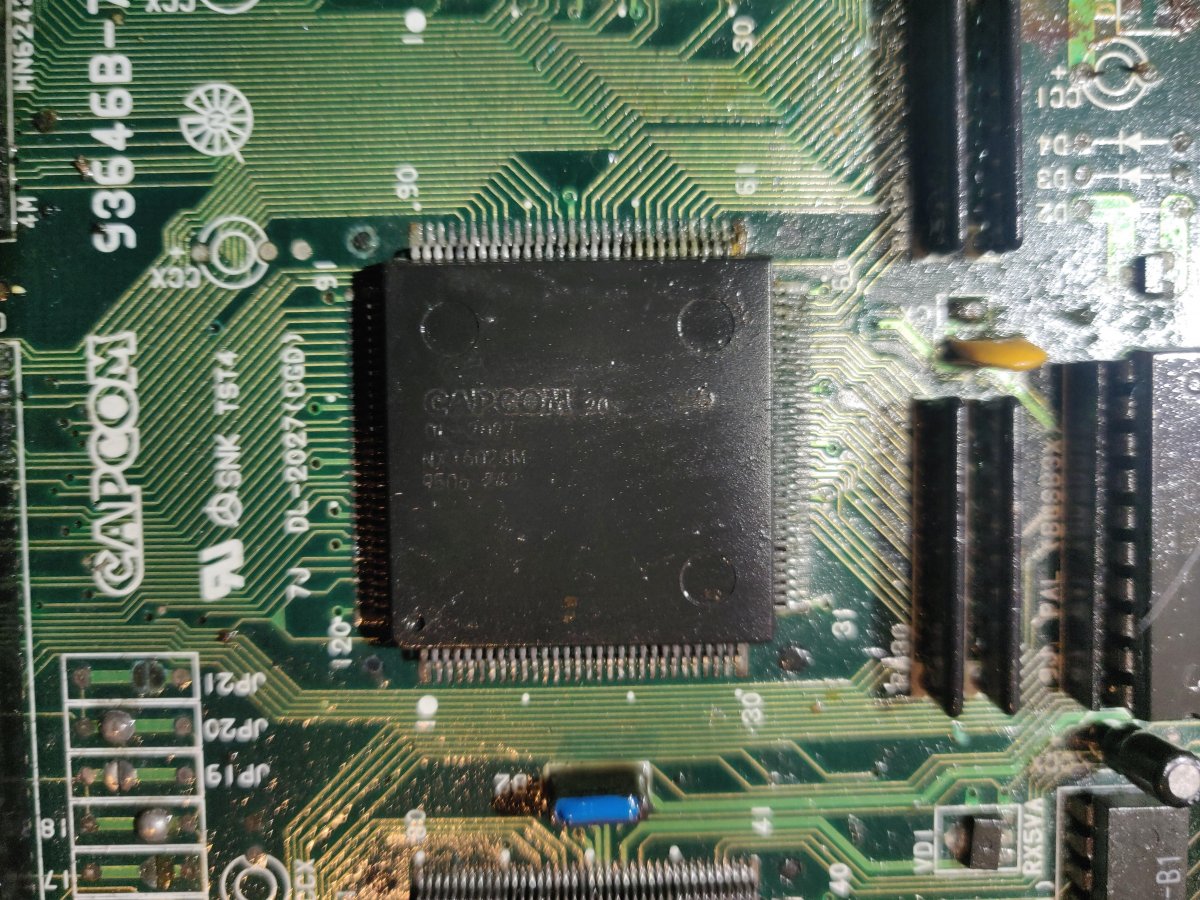 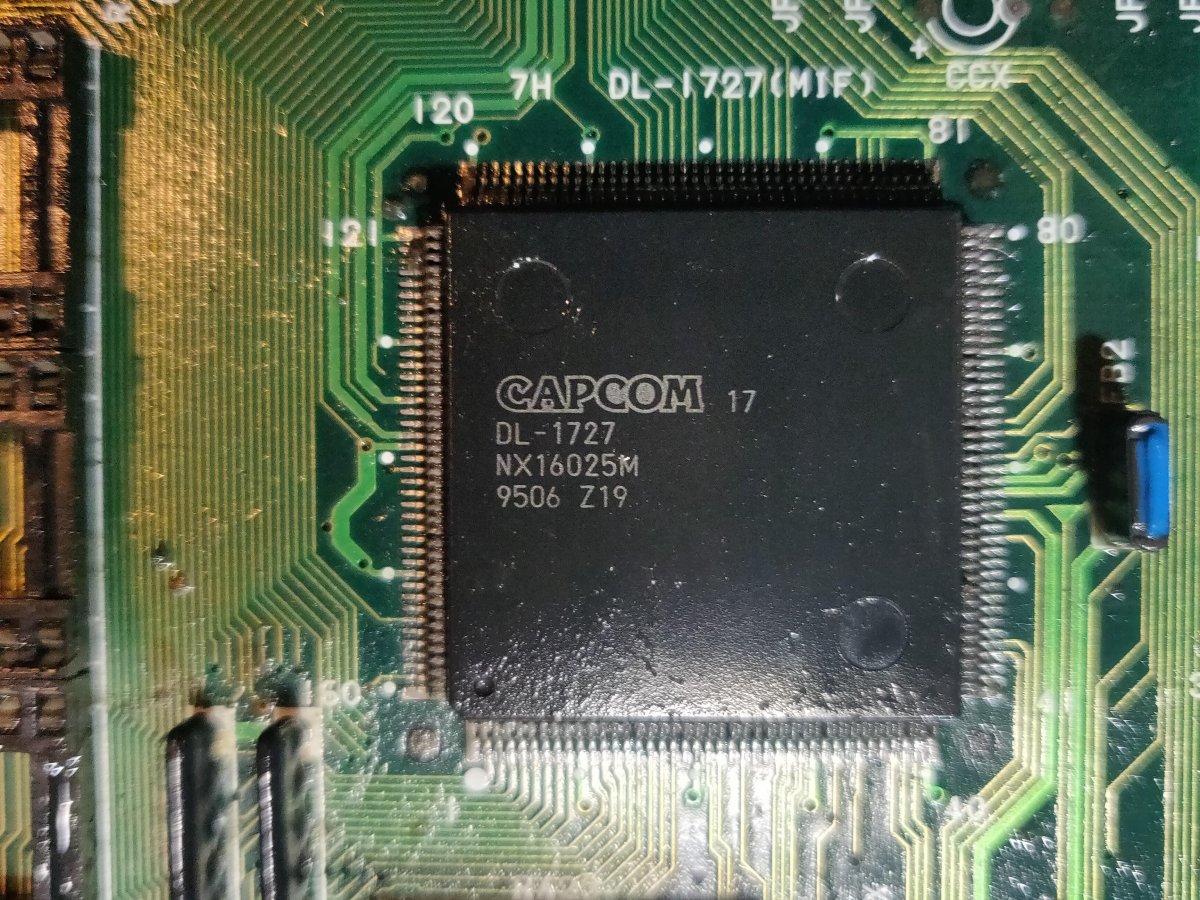 As you can see it was in rough shape. My first course of action was to try removing enough of the corrosion from the DL-1927 chip that I could try to remove the chip from the board and inspect the traces underneath it. I brushed the traces with a fiberglass pen and an X-acto knife until I could reveal some of the remaining solder. I carefully reflowed the solder on the pins that were still present on the chip until I felt confident that I could remove the chip with my hot air rework station without damaging the pads. After removing the chip and fully cleaning and tinning the pads, I found many breaks in the traces below the chip. I set to repairing each one of them using 32AWG enameled wire. 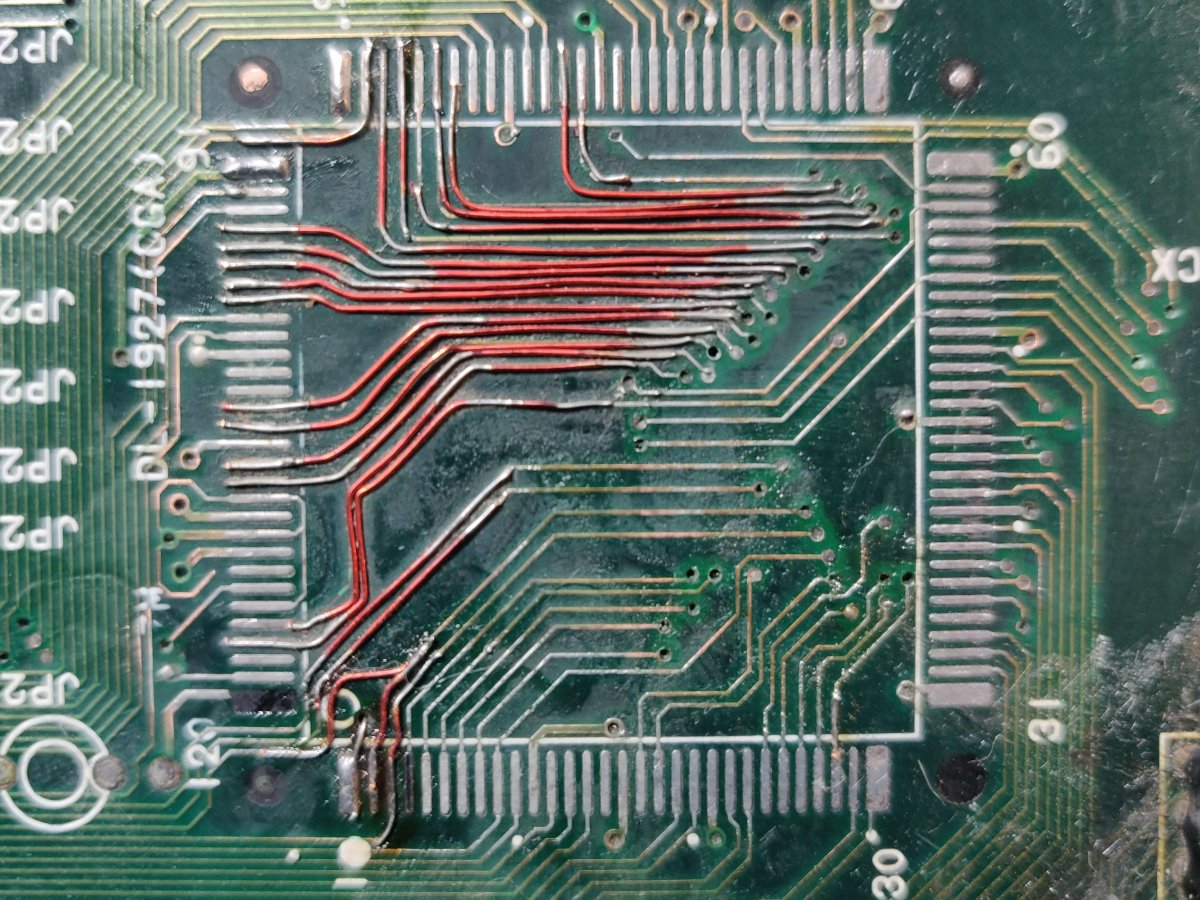 I then dremmeled and dug out the traces for the missing legs on the DL-1927. 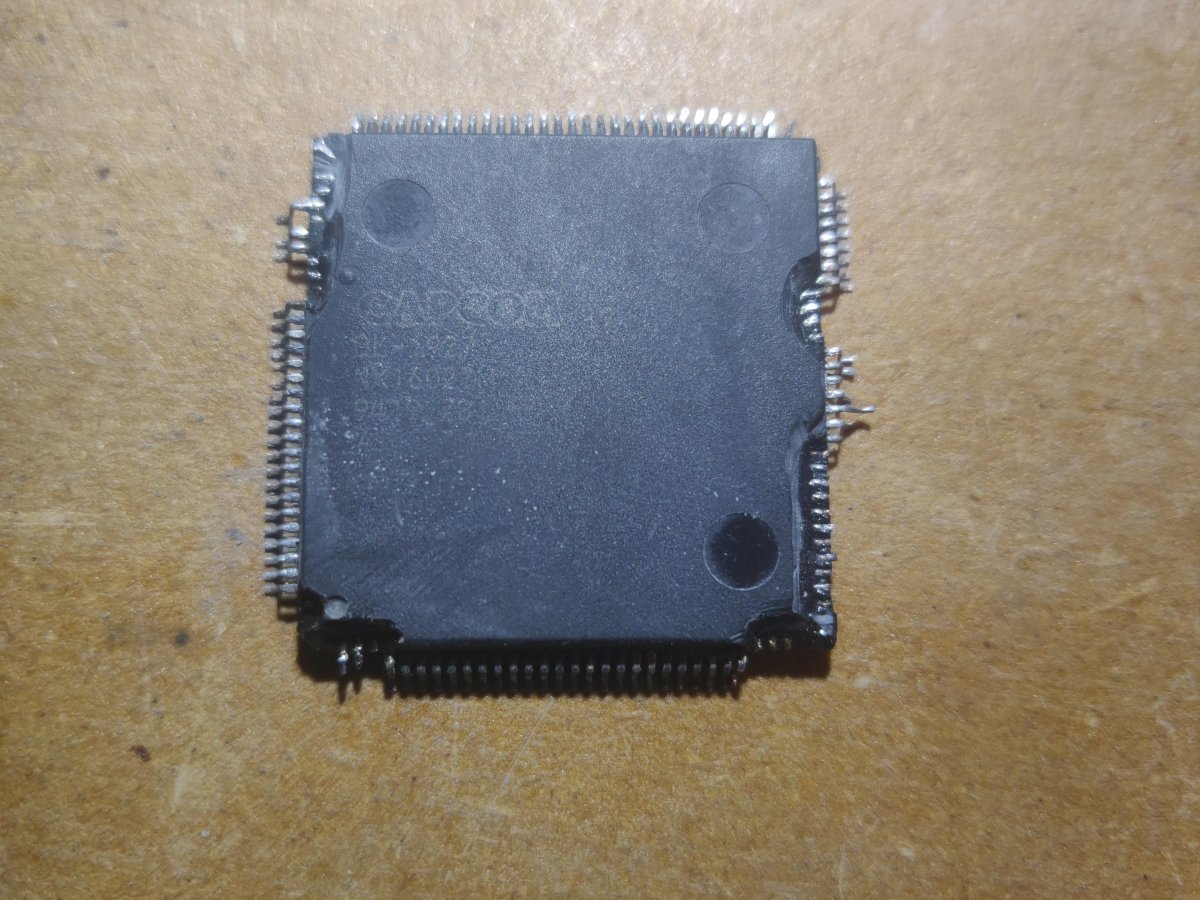 I soldered the DL-1927 back to the board and wired the missing legs individually to the board. 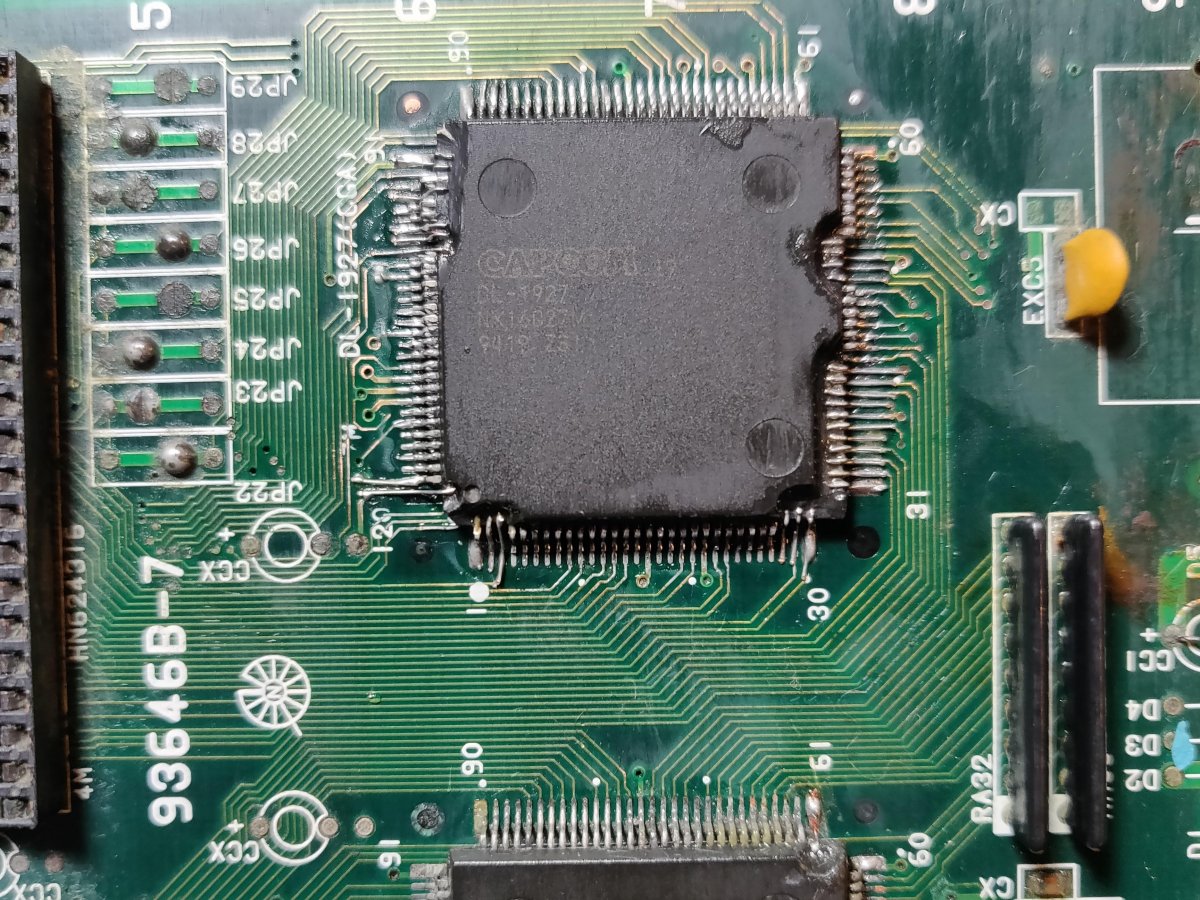 After that I put a set of Street Fighter Alpha 2 roms that I pulled from the second dead B board that I received, attached it to an A board and fired it up. I wrote the proper keys for SFA2 but I got a solid color screen and no signs of life from the B board. After this was a long process of probing each and every pin on all of the customs with my oscilloscope to check for activity and cross reference it with the CPS2 B board wiring spreadsheet. I found many broken traces between the graphics roms and the custom ICs as well as several broken traces between the various ICs. I repaired each and every one that I could find. Probably 30-40 in total. 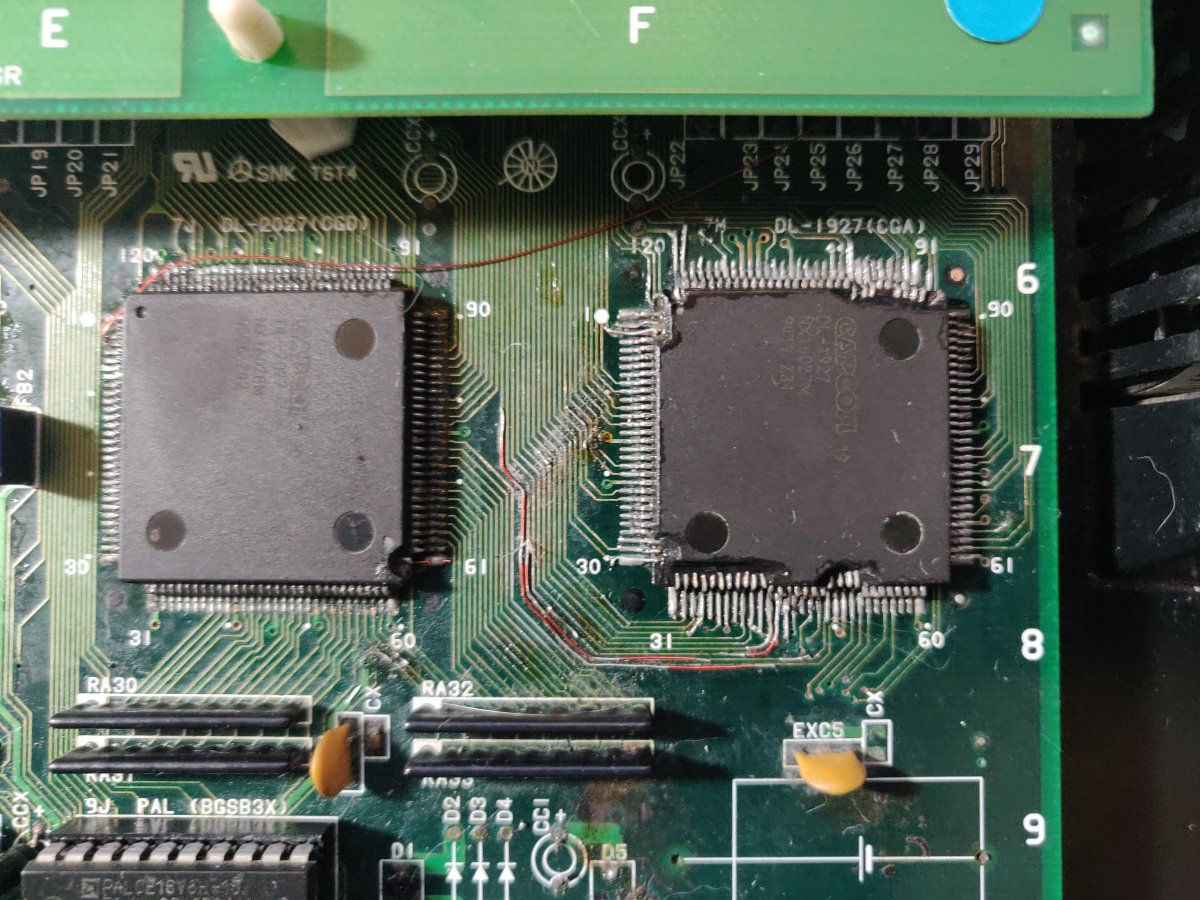 So now we arrive at the current status of this board, and where I need some advice. The board boots now to a white screen, however it is not a suicide screen, the game actually works. Audio is working correctly and the game plays through it's attract mode correctly. Inputs are working properly, but I only get a white screen for graphics. Occasionally I have been able to get small amounts of garbled graphics on screen when probing around the 74LS245s at 10L and 10M, but this behavior can't be replicated consistently.


As far as I can tell there are no remaining broken traces, so my question at this point is which custom is most likely responsible for my lack of graphics, and does anyone have any ideas as to where I should be looking diagnostically to track down the source of this problem. At this point I have exhausted all of the diagnostic options that I can think of, and with the CPS2 being so poorly documented any help that someone with more specific knowledge of the hardware could provide would be much appreciated.
Last edited: Mar 12, 2021

I dunno man, the documentation is coming along pretty well! Maybe you havent seen this yet? B board is 100% reversed now https://gitlab.com/loic.petit/cps2-reverse

Gotta be something in there a smart fella like yourself can use!

I applause such dedication.

glutton for punishment much?!

Dude you have skills! But I'm thinking maybe also too much freetime... (ie ain't no CPS game worth that level of frustration, toss it in the dumpster your time is worth money too).

jassin000 said:
ain't no CPS game worth that level of frustration
Click to expand...

I agree, but this is excellent practice.

CPS2 boards are low risk because they're low value. practice on something like that, so when you get that expensive board that IS worth the time and frustration it's smoother sailing.

jassin000 said:
Dude you have skills! But I'm thinking maybe also too much freetime... (ie ain't no CPS game worth that level of frustration, toss it in the dumpster your time is worth money too).
Click to expand...

twistedsymphony said:
I agree, but this is excellent practice.

CPS2 boards are low risk because they're low value. practice on something like that, so when you get that expensive board that IS worth the time and frustration it's smoother sailing.
Click to expand...

This is a practice exercise for me. I'm testing my skills and trying to expand my diagnostic toolbox.

Edit: @ekorz wow, I had not seen that project before. I was working off of the earlier B board trace out that apparently led to that full reverse engineering project. The info there is incredible. I think I'll be able to figure this out with that resource.
Last edited: Mar 13, 2021
A

Are your jumper settings correct for the game?

Gentlemen, we got 'em.

After looking through the schematic in the CPS2 reverse engineering project that @ekorz linked, I tried to track down any and every port that could be related to graphics generation. I probed out all of the enable signals for the graphics chips, I looked at all of the clock signals to each chip and finally I spotted VBLANK. Knowing that VBLANK was going to be important for graphics I checked where VBLANK was routed to and to my surprise I found that it went from CN2 to DL-1827. This was surprising to me because DL-1827 doesn't appear to handle and of the graphics addressing at all, so I figured it only dealt with the program roms or something.

Ultimately VBLANK was good at DL-1827 showing a ~59.9hz waveform, but I also noticed that REFRESH was right next to VBLANK on CN2 and also went to the DL-1827. I wasn't sure what REFRESH was, but since it was paired with VBLANK on CN2 it seemed like it probably could have something to do with graphics. I checked REFRESH at CN2 and found that it was pulled low. At the DL-1827 however REFRESH was floating, and when I probed it with my oscilloscope, I suddenly had graphics. Perfect, clear crisp graphics.

I followed the trace all the way from DL-1827 to CN2 and that's when I found this: I patched it up and now I get perfect graphics. 
This was an excellent experience for me. I'm so happy that I got this thing working because I feel that this was one of the most extreme scenarios you could ask for in terms of diagnostics and repair and to succeed is really something. It pushed my limits in multiple respects, from troubleshooting to soldering precision. I feel I have a much better understanding of how the CPS2 works now, and this will aid in future repairs. Speaking of which, stay tuned for PART II 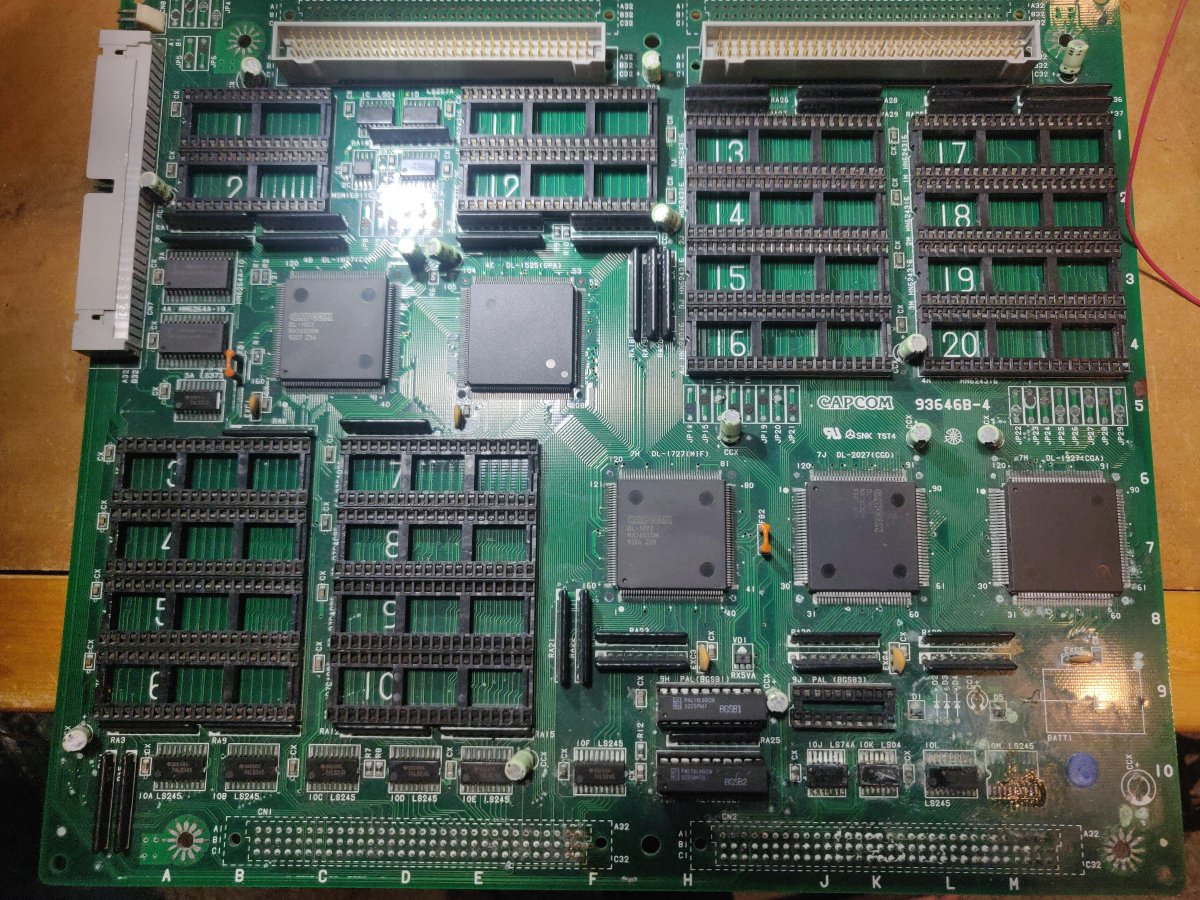 I have to say - I am blown away by what you were able to accomplish!

Glad my work for the reverse was useful! You've done an amazing job!

The ~REFRESH signal is transmitted to the main work+video DRAM to perform its refresh cycle. So, nothing really concerning video display at first glance. However, there is one synchronisation point inside the DL-1827 which pilots the main bus transmission. https://petitl.fr/cps2/DL-1827/#control-states
I'm not 100% sure of the consequences here but that have an impact on the palette refresh mechanism so... white screen.

EDIT: I added a link to the schematics in the wiring spreadsheet I originally made. Sorry for not linking it earlier that might have helped you
Last edited: Mar 13, 2021
You must log in or register to reply here.
Menu
Log in
Register
Install the app
Top