Got one that has us stumped. Going to just give up and take this to PNL when I can find the time, but in the meantime if anyone has any advice for things I could try first I’m all ears.

Monitor was working fine and then something happened and it developed this sync problem. If anyone has seen this before or even has suggestions for things we might not have looked at lemme know!

What you are getting here is a H sync pulse issue, if the wiring to the monitor is good , most likely you have to replace the ic U550 (LA7853) and check or directly replace the caps in that area.

Already recapped the whole chassis and replaced LA7853. I don’t know how to verify that the new IC is any good though. 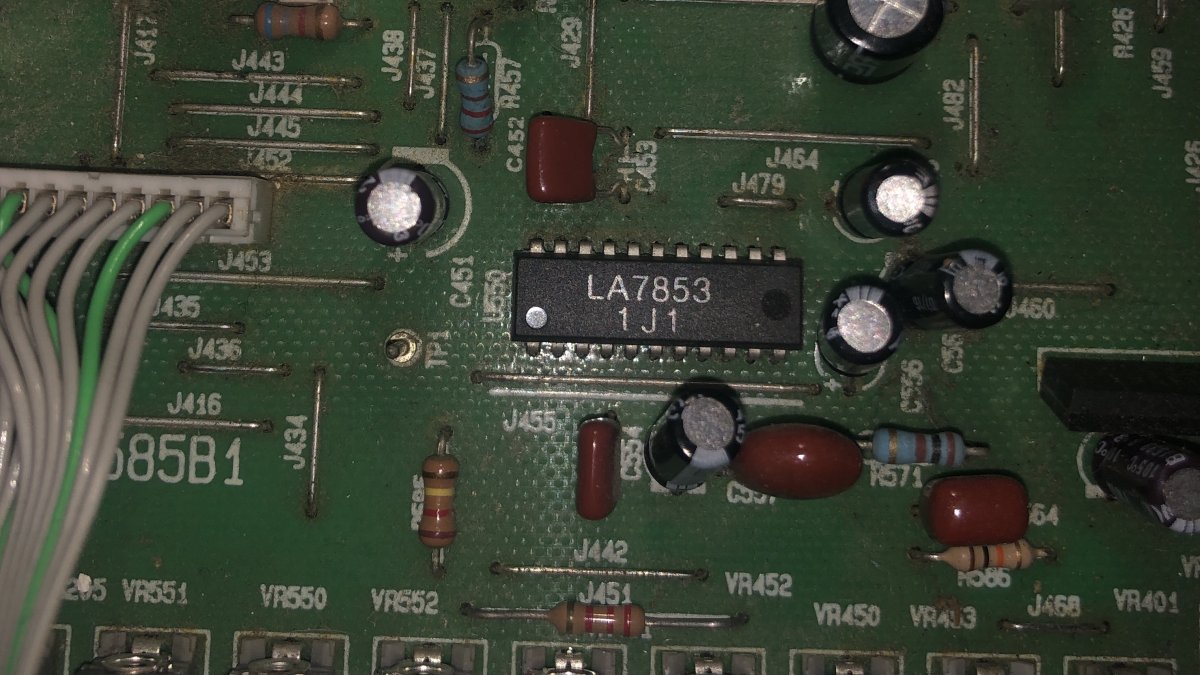 I guess the other question really is why did the LA7853 go bad in the first place, and did the replacement just fall victim to the same issue. Gives me something to poke at at least, so thanks!

Trace the signal for H phase adjust, it might be floating if the knob doesn't do its thing properly.

Thank you for that It is one that I always look for but it was always terrible quality. this one is much nicer!

Hatsune Mike said:
Trace the signal for H phase adjust, it might be floating if the knob doesn't do its thing properly.
Click to expand...

Thanks Mike, will add it to the list of things to check. grantspain over at OA asked "if you remove video and up the brightness does the raster remain stable?" and I'm going to check that too for more data.

His other suggestion was "i have the an5551 at U450 cause very odd sync faults in the past".


nem said:
I scanned the schematic for the 29SU some weeks ago.
Click to expand...

Awesome. Not the clearest document, but compared to what we had in the past this is like the meme with Peter Parker taking off his glasses lol. With a little effort you can actually read this one!

Thanks - I had been reading the labels upside-down.

I've been tracing out a new schematic in KiCad working off of a PCB scan I did a while back, but having this original one in better quality than the other crummy ones of the past is a huge improvement. Thanks for scanning that.

(Posted this update at AO, duplicating here to keep a record)

Alright, got an update, and it's getting interesting.

Fired up the monitor with no video, and went to turn up the screen to see the raster lines. Turned it a little too far and kicked in the protection circuit, heard a click and lost neck glow, managed to freak myself out. Turned everything off, lowered screen, turned back on, everything fine. I did curse for a minute there though.

Okay, so I have raster lines, and they're definitely rolling. But then I remembered I had tried playing with the H.H.15 pot earlier, and it might just be normal horizontal hold being off. Tried to adjust it, but with just white screen and raster lines it was too hard to see.

So I went ahead and powered on the other cab this one was slaved to to get a video signal so I could see. And yeah, it was definitely horizontal hold garbled, so I adjusted the pot. And ... suddenly got a stable picture. I could see the game clearly, no waviness.

Geometry was a mess from trying things earlier, went into test menu to get mostly sorted, and this is where I ended up: 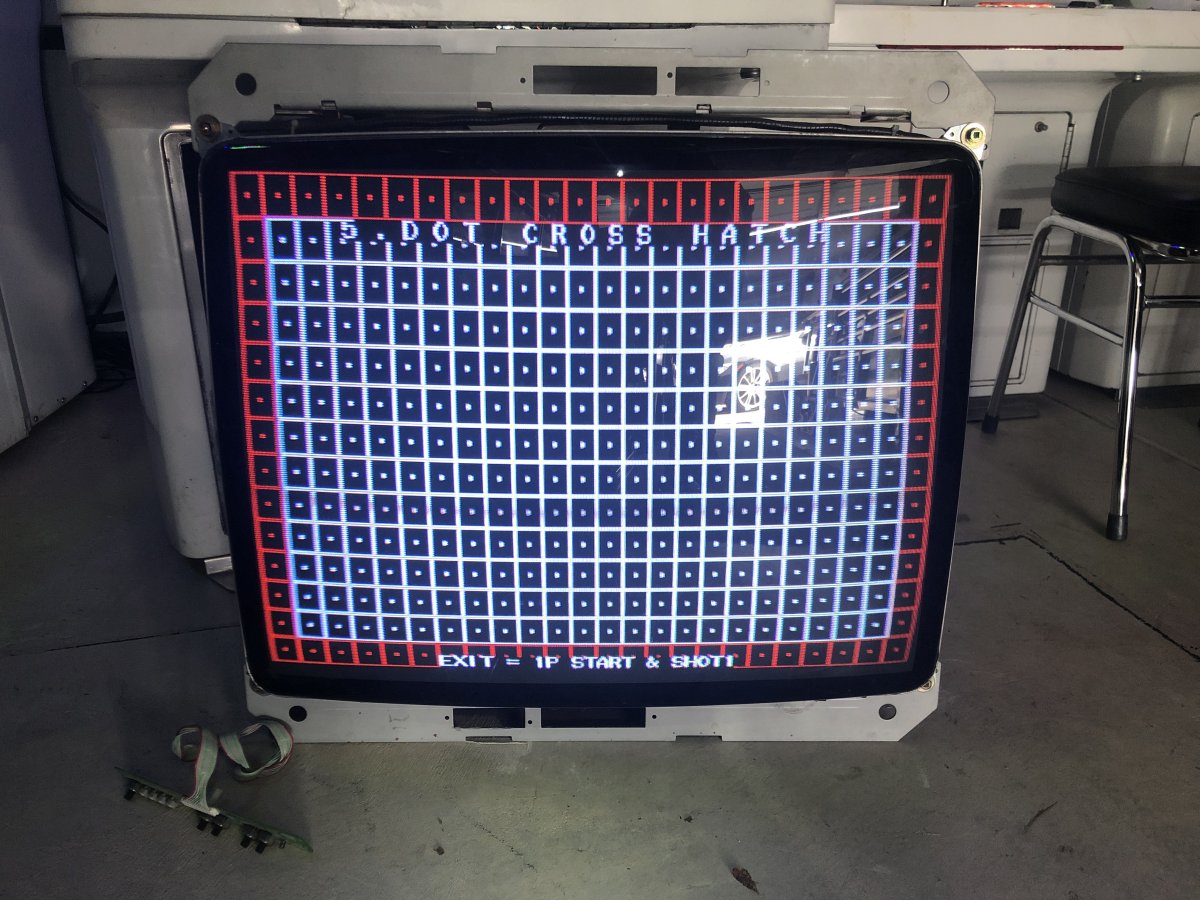 That's progress! After getting a mostly tuned up geometry so I could see properly I went back into the game attract mode. At this point it's like 90% working, but I do see some occasional little sync flickers in from the edges. It's not magically 100% fixed. But now I'm wondering if that pot was the source of the issue all along? I can't think accidentally going too high on the screen did anything.

I haven't messed with it further yet, calling it a break for lunch now, and I admit I'm slightly afraid to touch that pot again now that it's kinda working lol. But not feeling at all confident about this 'fix'. Maybe this is enough data to draw some conclusions though?

It's not that easy to spot the little flickers, but there are still present it you watch carefully:

Glad to see progress. I myself decided to look at the better quality schematics for my broken MS9. Unfortunately, mine is irrepairable unless I get a parts MS9 (looking for T901). The winding between pins 2 and 4 is shorted rendering this transformer useless.

How this winding ended up shorted? Let's say never unplug a chassis powered on from a U.S. Namco arcade cabinet.

It's a bit hard to spot the problems in that video, they're honestly infrequent and minor, but the transition screen with Chun has the clearest ones I think: 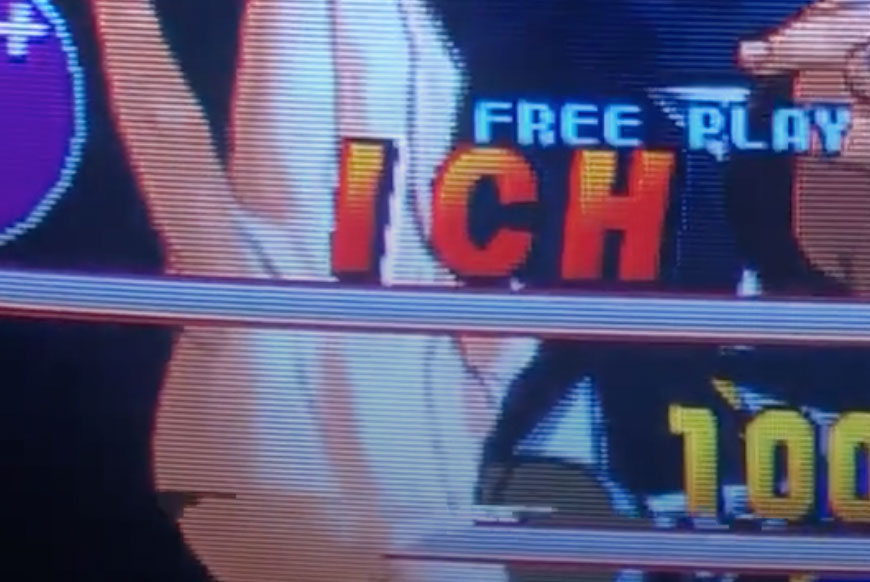 Just as a little update, I messed with the HH15 pot. I was able to get the usual horizontal sync stuff to happen, but I couldn't get the major problem to return. So it's not some magic sweet spot on the pot that's working that you can't touch ever again.

Have you already tried to replace this pot/trimner? Sometimes those get corrosion intenally and fail, no matter how well you clean if those are done.

Is this a nanao chassis paired with hitachi tube?

I have not replaced the pot, I assume you mean the HH15. Given the current behavior I kind of doubt that will do anything helpful, but certainly possible I guess. If the pot was failing though it seems unlikely I'd be getting the standard behavior out of it like I am now. I could be wrong!

It's a Nanao MS9-SU, not sure who made the tube on these, it's not branded.

can you post a photo of the rear of the monitor, just to take a look at the yoke?

Sure thing. But what are you looking for? This strikes me as a chassis problem, is there something on the tube that would cause this in your mind? 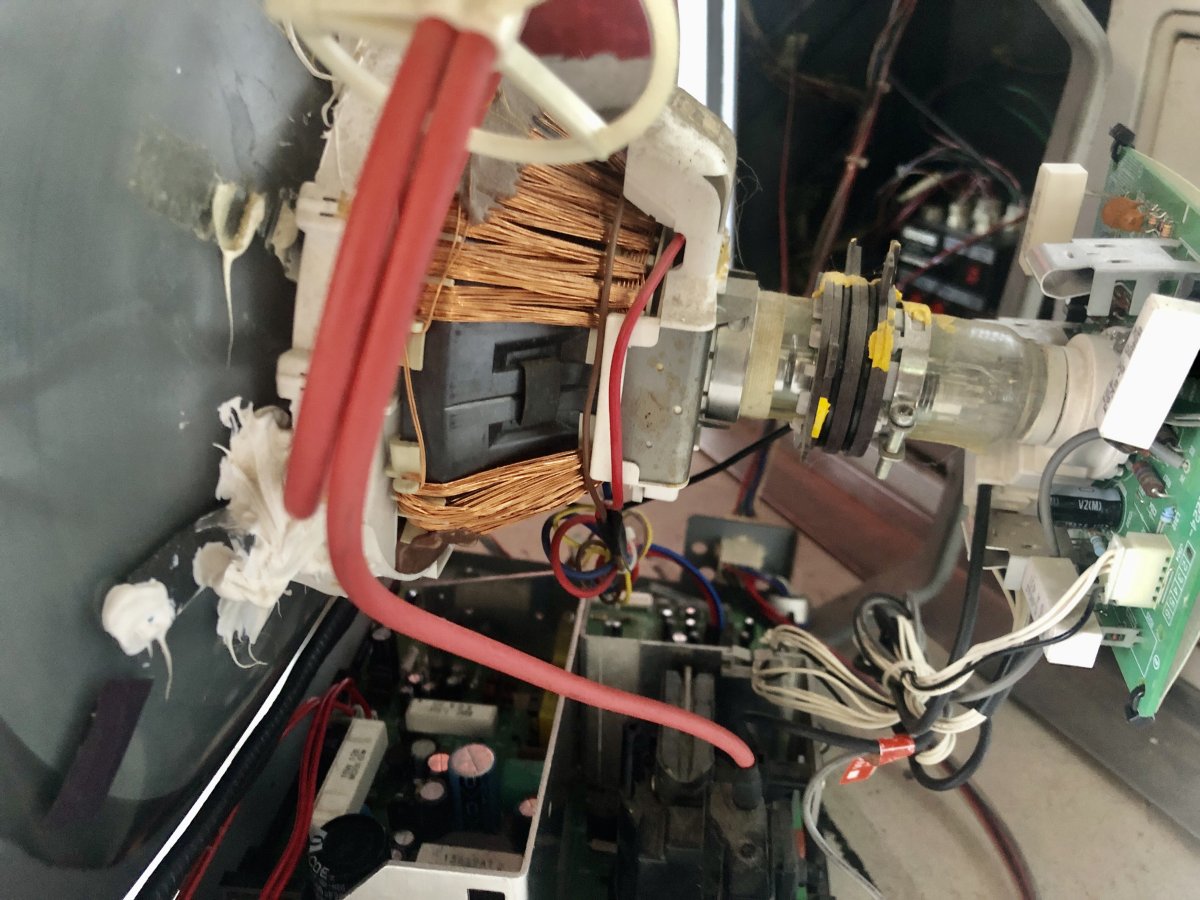 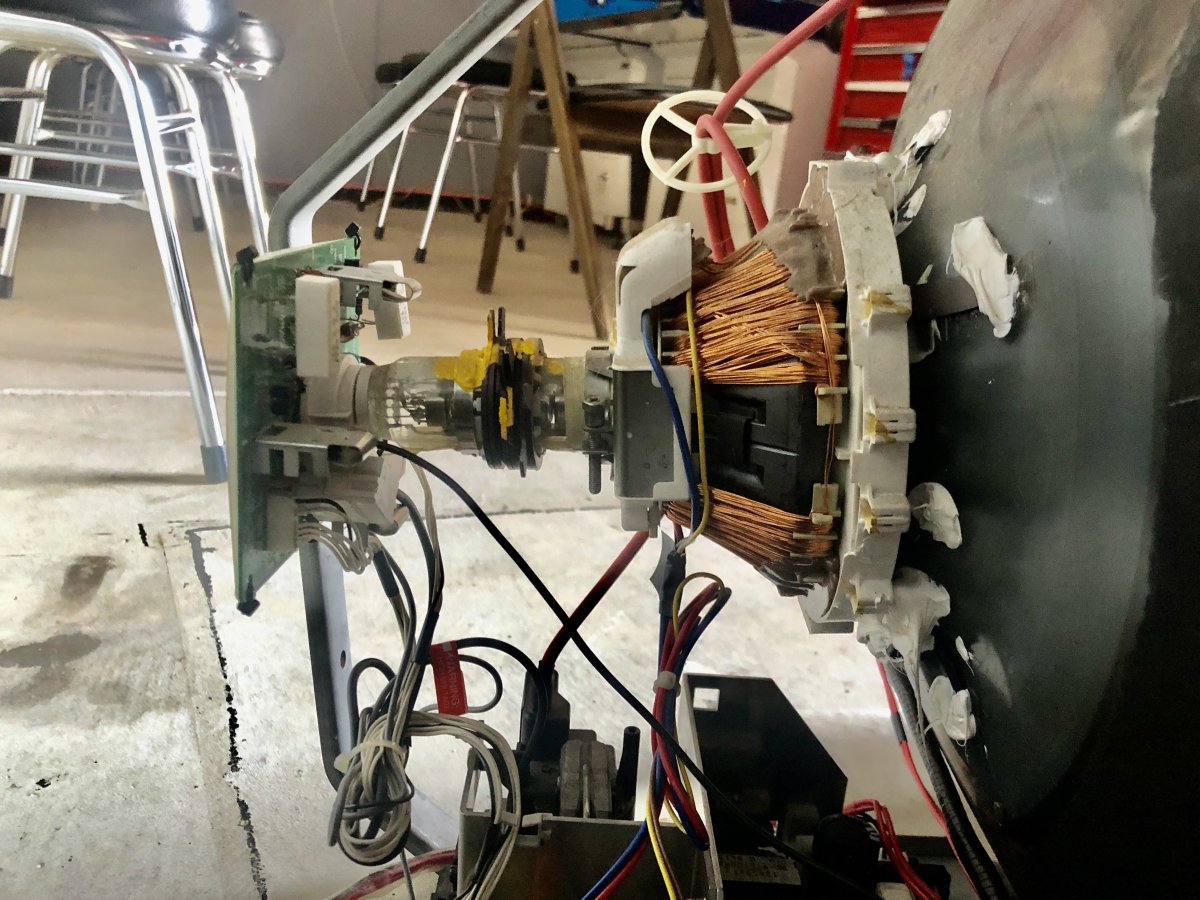 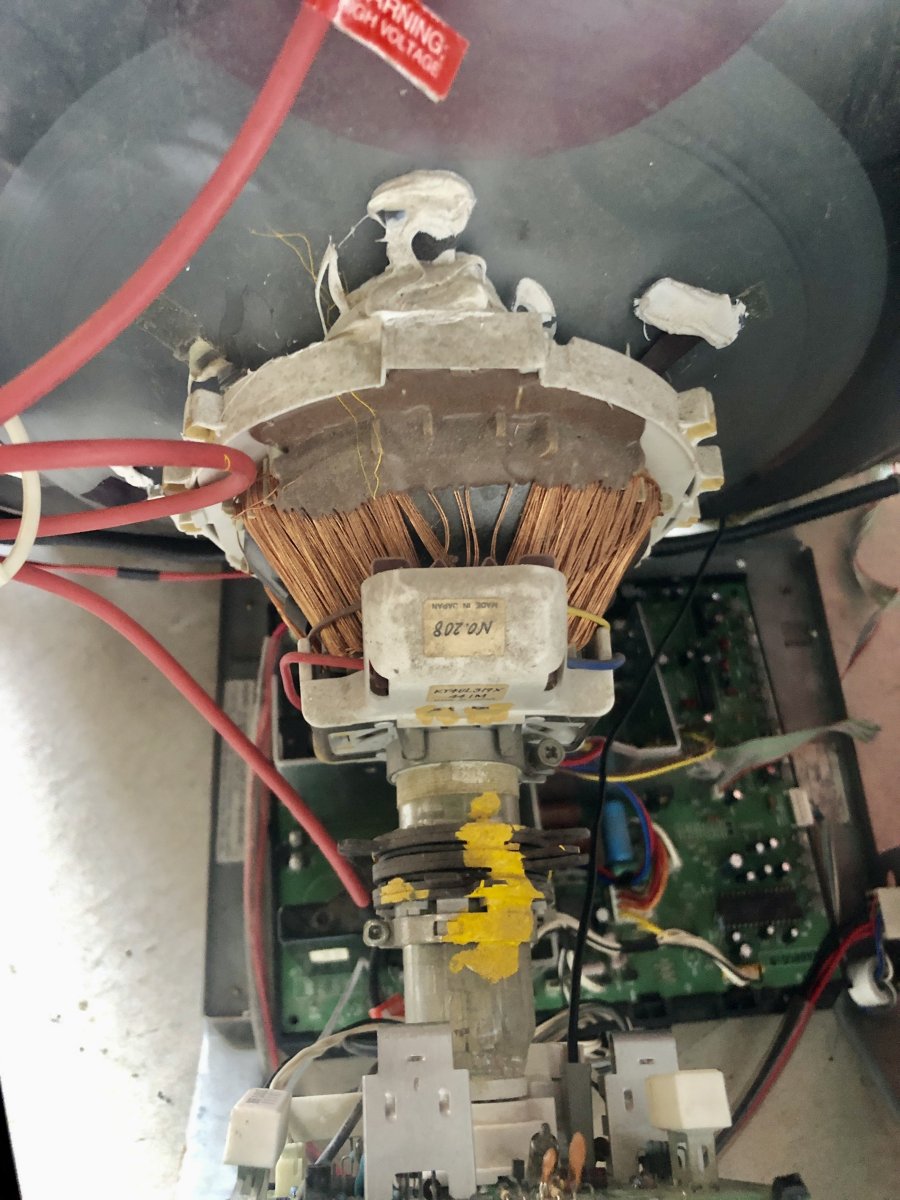 I was just curious , the yoke is the one for the nanao SU +hitachi tube but not sure about the brand of the tube itself it appear the yoke was swapped, bytheway apart the vertical linearity wich is easily addressed by V. linearity pot, this monitor looking good and yes , the latest issue wich you have now is chassis only related , obviously.
You must log in or register to reply here.
Menu
Log in
Register
Install the app
Top