Hey @Darksoft - can we get the Menu updated on the Multi to support it?

Is the game suppossed to be available only to Patreons or for everybody? I cant see a download link.

It's only for Patreon backers for now. I'll PM you.

Looks cool, my first thought was this would be awesome with a spinner…then I read the Patreon and found out it has spinner support! Though the spinner board hasn’t been produced yet 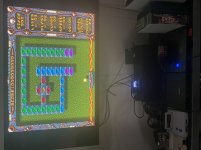 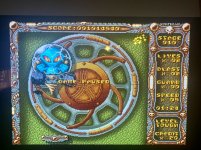 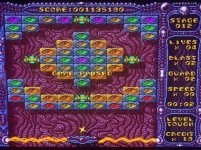 Looks like a great game! Eager to play it.

This game looks really cool! I subbed yesterday and currently I am impatiently waiting for the Darksoft Multi release

Looks like a great game. Thanks for the heads up, and good work on getting it converted for the MultiMVS.

Booooyyyyzzz the waiting has an end! the version for the Darksoft multi is downloadable!!!

I played it around an hour or something (got lost in time) and I must say I relay like it! It’s not like any other Neo Geo title and it’s not eating your credits but it is fun an really polished. I recommend it

The MiSTer core has been updated to support spinners (and mouse) on games like Hypernoid.

I don't wanna be hated but, do we really needed an "arkanoid" on the neo geo? looks dull to me

It’s a pretty impressive piece of work and far from dull IMO.

Nothing wrong with paddle games.

I wonder how well it works with Brizzo's universal spinner board.

If you put the "@" sign before the username, you will ping that user and he'll know he was referenced.

TheDeath said:
I don't wanna be hated but, do we really needed an "arkanoid" on the neo geo? looks dull to me
Click to expand...

As long as you can buy it as a download, I welcome any and all homebrew for the Neo. It had been overlooked by homebrew developers for too long.

Very fun game. I played several hours last night. Thanks for the tip.

That first boss is an a-hole!

The 2 after him were much more reasonable.

TheDeath said:
I don't wanna be hated but, do we really needed an "arkanoid" on the neo geo? looks dull to me
Click to expand...

The developer explained that it's kinda the game he could make.

He was trying a more ambitious project, a clone of In the Hunt (which I would love to see finished), when he realized he wasn't up to completing it. He needed some more practice and to develop his skills more.

He had ahead already made a simple paddle game in the past, so he went back to what he knew how to do, but expanded it greatly.

Hypernoid was a learning experience and I would image will be a spring board for the developer to take on or complete more ambitious work.

The end result is a really polished and well playing game. I'm not a huge arkanoid/breakout fan but I'm a big fan of this game.

Edit: Corrected the name of the game the more ambitious project was/is based on.
Last edited: Jul 15, 2021

On my Omega with virtual memory card, I saved my progress at level 33. I can start at level 33 now. I like this a lot.

Anyone have any experience using the MiSTer memory card functionality with this game?
You must log in or register to reply here.
Menu
Log in
Register
Install the app
Top