In for repair is a Namco Outfoxies PCB, running on Namco's NB-2 platform. NB-2 has a large mainboard and a ROM daughterboard. The ROMs on the daughterboard are each 16 megabit SMD chips. The owner reported that the Professor character in the wheelchair displays jailbars. 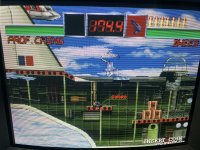 While waiting for the board to arrive, I fired up MAME and deliberately zero'd out the OBJ ROMs one at a time until I isolated which ones duplicated the PCB's behavior. OBJ2L and OBJ2U each provide half of the data for each Professor sprite frame. When either one of the files is corrupted then the character renders with jailbars. If both files are corrupted then the Professor isn't drawn at all.

Once the PCB arrived, I examined the ROM board. It turns out that the Namco OG OBJ2L ROM had already been swapped out with a flash equivalent by another technician. That technician left a bunch of flux behind, and it looks like he also resoldered the OG Namco ROMs physically located above it while he was at it - likely from not masking off the other chips when applying heat to OBJ2L, causing the other chips to come loose as well. 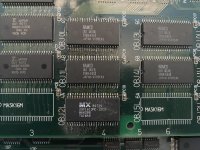 I cleaned up the leftover flux with Q-Tips and isoproyl alcohol, then examined the solder joints of the three chips under the microscope. The solder joints checked out - I didn't see any lifted pins. Continuity tests checked out for all of the pins as well. For good measure, I reflowed the solder on the OBJ2L flash ROM and re-tested the PCB, but the jailbars on the Professor remained.

This is the point in the story where my chip programmer becomes a problem. I had been using an EETools ChipMax II for almost four years as my workhorse programmer, but it failed recently with a Pull Up Resistor error, and EETools refused to repair it outside of warranty. I had previously purchased an inexpensive Embedded Computers FlashCat-XPORT for SMD chip programming, so I tried to use it here. Unfortunately, the FlashCat turned out to be untrustworthy.

First off, the PCB owner included the original Namco OBJ2L ROM with the board - the prior technician had saved it after swapping it with the flash chip. I installed the ROM into the FlashCat and ran a comparison with the equivalent MAME file. The FlashCat reported that only 44% of the data on the ROM matched the MAME file, so it seemed that the ROM was indeed bad and that swapping it out had been the right move by the last technician. 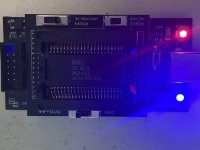 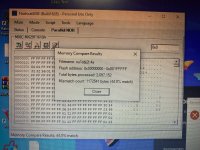 Next, I carefully desoldered the OBJ2L flash chip from the ROM board, inserted it into the FlashCat, and tried to run the same MAME file comparison. The FlashCat wouldn't recognize the flash chip so that it could be dumped. 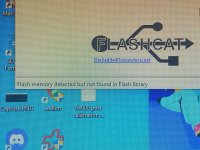 Alright, maybe the flash chip had gone bad then. I programmed a fresh flash chip, soldered it back to the ROM board and tested. Unfortunately, the jailbars on the Professor remained - BUT a few of his animations (like swimming) now showed up jailbar free. 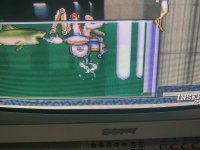 That leaves the other ROM responsible for this character's sprite graphics - OBJ2U - as a potential troublemaker. Maybe a second OG Namco ROM had failed?
I carefully masked off the chips around it and desoldered it from the board. 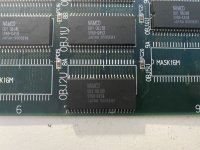 I then placed the mask ROM in the FlashCat and ran a comparison against the equivalent MAME file. It reported a 68% match - so apparently this ROM had also gone bad after all. 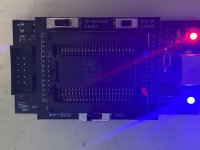 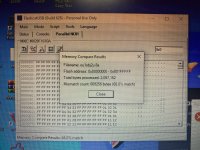 I programmed a fresh flash chip for OBJ2U, soldered it into place, and feeling confident - fired up the PCB for testing..... 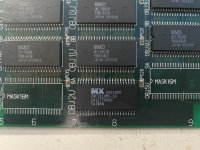 Except to discover that now the Professor sprite isn't rendering AT ALL! Not even with swimming, or any other activity.

I don't trust the FlashCat at this point to have either read the other chips or programmed the new flash chips properly. I've ordered a new programmer (Dataman 48Pro2C) and will try again with verifying the OG Namco mask ROMs and programming any required flash replacements after the new programmer arrives. To be continued...
Last edited: Aug 24, 2021

Nice work, hopefully the new programmer fixes the issue. I always forget that MAME is an awesome tool for troubleshooting.

I was getting ready to pickup a FlashCat, curious if others have had issues with them.

Time for an update on Outfoxies.

There seems to be something else going on to cause the jailbars with the Professor besides the chips, although the jailbars are worse now then they were before I started. Is the board picky about the speed and type of 29F1610 flash chips I'm using?

It seems that @caius has diagnosed and repaired a similar issue with Mach Breakers, which runs on the same motherboard as Outfoxies. I followed his procedure for substituting blank files in MAME for each OBJ chip to isolate which ROMs generated the Professor sprite data. If you have any other suggestions, please let me know.
https://www.jammarcade.net/mach-breakers-repair-log/

Also, if anyone else experencied with this family of Namco boards has suggestions, let me know. @Hammy ? @Apocalypse ?

Next, I'm planning on hooking my logic analyzer up to one of the replaced OBJ flash chips to find out what's going on with the address, data, and control lines. 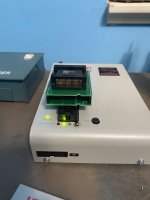 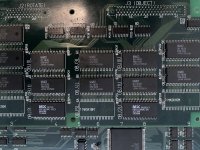 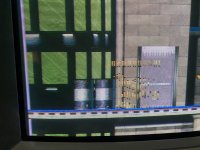 my guess would be there is some trace damage related to those chips you replaced (perhaps introduced in the previous repair attempt). considering all of the other object ROMs are on the same buss if it were something further downstream I'd think you'd see jail-bars across all sprites.

The traces looked fine under the microscope, but you never know - SMD stuff is definitely fragile. Testing the continuity on each pin is a good suggestion - thank you!

If there are jailbars then the problem is in data bus of sprites circuit.Assuming that the object ROM board is good (no broken traces, good ROMS and logics, good connection with motherboard, etc..) you should draw the sprites generation circuit to figure out what processes the data from ROMs.Most likely it's a custom ASIC (don't have any board to check).The best would be to swap in a good motherboard so you can know for sure where the fault lies.Anyway, I think you can fix it with your skills and some time.
Last edited: Oct 9, 2021

I appreciate the vote of confidence! It definitely sounds like continuity testing, logic probing and logic analysis on the two OBJ chips will be the next steps.

I don't have another Namco NB-2 board around to swap the Outfoxies ROM board with, and the cheapest I can find Mach Breakers for is $450 USD. I'll try to get by without another NB-2 test board for now...