My Mach Breakers: Numan Athletics 2 had some audio issues. I sent the board out to replace the caps, etc. He was successful and sent back to me through the mail. When I put the board into my machine, but it plays the music, but none of the sfx and voices. I reseated the ROM board and all of the socketed chips, but there is no change. Does anyone have any idea on where I should look, or start?

Any help would greatly be appreciated. Thanks.

SFX and Voice data on that board is stored on two 42-pin Mask DIP ROMs located at positions 6N and 6P on the main board (not the ROM board). They'll be labeled VOICE0 and VOICE1 on the PCB. 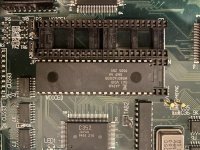 Carefully pry each ROM out of the socket with a small, flat screw driver. Spray out the socket with compressed air. Inspect the legs on the ROM and see if they look dirty or tarnished - if so, you can carefully scrub them clean with an emery board. Reinstall the ROM, making sure that the orientation and positioning is the same as in the photo, and with none of the ROM legs sticking out. Repeat for the second ROM. Reinstall the ROM daughter board, power up, and test it again.

If you still don't have SFX or voices, you'll want to dump each ROM with a chip programmer and compare the dump against the same file in the MAME romset for the game. The ROM set is named "machbrkr" and the files are "mb1_voi0.6n" and "mb1_vo1.6p" for VOICE0 and VOICE1 respectively. They should dump if the chip type on the programmer is set to a 27C160 EPROM.

If one or both of the dumps don't match the equivalent MAME files then the ROM chip might be corrupt. The mask ROMs were manufactured by Fujitsu and unfotunately Fujitsu has a poor track record with their chips on arcade hardware. A 27C160 EPROM can be programmed with the file data from MAME and installed in place of the mask ROM in the socket. Both ROMs have to be correct for the SFX and voices to work.

If you want replacement 27C160 EPROMs programmed, I can do it for you for just the cost of parts and shipping.

One more thing - make sure the two jumpers to the left of the VOICE1 socket are present and set the same way as in my photo. If either of those jumpers are missing or set incorrectly then the SFX and voices won't work.
Last edited: Sep 8, 2022
T

I tried cleaning the legs and blowing out the sockets with compressed air. No change. I don't have a ROM reader or burner, so that's out.
I just had someone replace the caps and clean the board. It was sent out working, but you know how that goes.
I will attach some things I found.

ThatArtGuy said:
I tried cleaning the legs and blowing out the sockets with compressed air. No change. I don't have a ROM reader or burner, so that's out.
I just had someone replace the caps and clean the board. It was sent out working, but you know how that goes.
I will attach some things I found.
Click to expand...

oof those traces are lifted on that first picture. that could be a problem. looks like your old caps leaked as well before you sent it of to be recapped. those traces needs to be jumpered. scrap off the solder mask on the good side thats not lifted and apply some 30 gauge solid core wrap wire.

If the board was sent out with the voices and SFX working but came back with them not working then it's likely not a ROM issue but that traces were damaged during the recap. A tech will need to check each of the lines on both DIP sockets for continuity to the destinations. Or a logic probe could be used with the board running to detect which pin(s) are floating (disconnected).

I agree with @triforce7770 that the traces in your first photo look questionable. They should be checked for continuity and repaired.
T

The voices and SFX were working before shipping back to me. *shrug*

Well, it’s straightforward to replace the ROMs with EPROMs since they’re socketed. I can program a pair of replacement EPROMs for you if you want.
if the replacement EPROMs don’t make a difference then you’d know for sure that it’s a trace damage issue.

It's always dead lines on namco due to the capacitor rot.
If the juice gets into a custom chip it's game over... You got lucky.

Well , there was capacitor sludge under the ram, needed those ram removed, cleaned underneath and refitted.


Terrible filming/ camera combo, you will need to raise the volume above normal!
View: https://youtu.be/BfqnQo0wrqs

Just check my board and sure enough, all the capacitors are leaking. Glad I looked at this thread before it got worse. Looks like I'll be ordering caps for this and my local buddies that also have these boards. Thanks!
You must log in or register to reply here.
Menu
Log in
Register
Install the app
Top