No graphics on original Chase HQ 2 Sit down Cab

I recently purchased an original Chase HQ 2 sit down cab, but sadly when it arrived some wires weren't plugged in on the game board and there may have been an existing fault with the graphics and sound, however I did play it working before it was shipped, the only issue then was sound only came through 1 speaker, everything else worked. Upon inspection of the sound amp (pictures attached) it looks like the right channel jack input has been pulled off so I will need to solder a new one on there to get stereo sound.

I had to replug in the hard drive and the monitor boots up fine with a "no signal" message and the PC also powers on with the CPU fan spinning and the motherboard LEDs lighting up. It also looks like the PSU has been replaced, I can't get any picture or sound through the graphics card but I have managed to get a boot up screen to come through the monitor using the onboard graphics, if I take the AGP card out. The game passed the initial HD check and then gets stuck on an IO error screen. I have tried to click past this to see if the game will boot using a usb keyboard and mouse but the X+ wont pick those up, so I have ordered some USB to PS/2 adapters and will try those when they arrive. I also had to plug in the Taito IO to the motherboard so I may have made a mistake there (I have attached pictures).

I have tried switching the AGP graphics card for another X+ compatible card that I know works and I still get no picture, so I am thinking it may be the AGP slot. I was told by the seller that the picture always came from the VGA port on the AGP card, but I have a DVI adapter at home so will also try that as well tomorrow, as I would prefer to get it working with the dedicated graphics card.

I have also discussed on this forum on a separate post if my X+ won't work, the possibility of running the game on a regular PC and plugging the Taito IO into that while running the original game with no JVS emulation. Luckily my motherboard appears to have a 9-pin JCOM1 Serial Port Connector that is RS-232 compliant, so that may be compatible with the Taito X+, so I will drive my PC to the unit tomorrow to do more tests.

Any information about my issue would be greatly appreciated, I will follow with more pics and updates tomorrow.

@torakai The only issue you may have swapping over the motherboard, would be if the HDD is ATA locked? I'm unsure if anyone else can confirm this, but you may need to remove the lock...

bobbydilley said:
@torakai The only issue you may have swapping over the motherboard, would be if the HDD is ATA locked? I'm unsure if anyone else can confirm this, but you may need to remove the lock...
Click to expand...

@nem Thank you for explaining, in which case using the multi:

And finding the unencrypted game files would probably be the best way to go for this one?

I cloned my original drive and overwrote the encrypted game image with the decrypted files.

I haven't tried the freeware multigame image. I don't see any reason why it wouldn't work. Also, with that one you could get it possibly running on a SSD. It's HDDs or bust with the original drive image.

> The only issue you may have swapping over the motherboard, would be if the HDD is ATA locked? I'm unsure if anyone else can confirm this, but you may need to remove the lock...

Thanks for confirming, yes I was planning on running the decrypted game on a new PC, so a full body swap as it were. I had heard that the HDD and motherboard were inseparable because of the security, which is why you are screwed if the motherboard battery dies similar to a CPS2 suicide battery.

I am at the unit now, I have managed to wire the IO correctly in the original X+, which has removed the IO error I was getting before and my PS/2 mouse adapter has worked, so I have been able to click pasT the errors. I am still only able to get a video signal from the onboard graphics with the original AGP graphics card removed. Which is probably why I now have the error "GRAPHICS SYSTEM ERROR:library", when that is clicked past I get a Japanese error message, I can partially translate as "game.exe - Application Error" and the message "cannot read memory allocation 0x004625cb and 0x000006e8. Please click OK to restart program" which then restarts the X+. I am thinking it is either a corrupted HDD image (probably not a dead battery, because that would show a different bios error) or/and a dead graphics card/AGP slot. Interestingly when I switch the card with another X+ compatible AGP card I still can't get a picture but the motherboard does beep and it doesn't make a sound with the original card, which makes me believe there is some communication, so maybe an uncorrupted HDD on the X+ might solve it and I could keep everything else the same. Either way, I have a hit a wall I think with the X+ without a new HDD with the original game image, I am gonna go to phase 2 and try and get the decrypted game running without JVS emulation on my PC and plug in the taito IO to my PC motherboard and see what I get, I just want to play the game on the cab! haha. I have attached some pics of the errors. 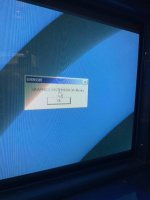 As an FYI Here's the info on installing a JVS port to a regular PC incase you want to use the cab for other games:

I ordered parts to do it myself a while ago after seeing this Youtube vid but it's still on my (ever expanding) "to do list".


He's not going to win an Oscar for the vid (the first 5 mins are completely blank) but he mentions that he was releasing some software to configure a JVS cab for mame or other PC stuff. I'm not sure if he did release it but might be worth asking on their forum.

@torakai Actually managed to make it work already! As he has a JVS card from the original Taito machine, he just used that I beleive.

@Zebra This is the software you're mentioning: https://github.com/teknogods/JVSClient

And then this is my version of the same thing for Linux, which is useful if you want to use it with a Raspberry Pi or something: https://github.com/bobbydilley/JVSCore

@Zebra Thanks for the vid! As Bobby mentioned yes I did get it working through my PC with my Taito X IO. I can now play the game through my original Chase HQ 2 cabinet, it was good timing as my X+ completely died. I will put a tutorial up on here, showing a step by step, I just have one more job to do (resolder a broken jack mount on the amplifier) then I'll upload something if people will find it useful.

I took a look at the vid it's very interesting! I was thinking of doing something similar and actually bought the parts on amazon yesterday. I want to see if I can get the same set up running through a USB to serial adapter to Taito IO, so the game can be played on practically any system. I was fortunate enough that my motherboard had a 9 pin serial port called Jcom1, which I wired directly.
Z

torakai said:
@Zebra Thanks for the vid! As Bobby mentioned yes I did get it working through my PC with my Taito X IO. I can now play the game through my original Chase HQ 2 cabinet, it was good timing as my X+ completely died. I will put a tutorial up on here, showing a step by step, I just have one more job to do (resolder a broken jack mount on the amplifier) then I'll upload something if people will find it useful.
Click to expand...

Do you mean you got it working with the original "PCB" PC or did you also connect a regular PC so you can play other games?

I meant I swapped out my Chase HQ 2 X+ for a PC running the same game and linked it to the taito IO so it runs in my Chase HQ 2 sit down cab.
2

Nice one Tora - great to hear you got it up and running again!

Cheers! Yeah so far so good, I still need to repair or replace the 6 channel sound PCB, as no sound currently as the jack mount is broken, I have sound coming through the game but can't get a constant sound through the amp. I'll let you know when I get it all working.

Also replace capacitors on the old motherboard and video card (as well as their respective fans if necessary). It's a common fault on most PC based arcade hardware.
Last edited: Nov 20, 2020

Thanks Hydreigon. I'll take a look at the caps.
You must log in or register to reply here.
Menu
Log in
Register
Install the app
Top