Recently I came across this article about a previously undumped prototype for "Power Up Baseball" it's basically Midways attempt at a Baseball version of NBA Jam or NFL Blitz.
https://gamehistory.org/powerupbaseball/

The game actually runs on Incredible Technologies 32-bit hardware (used by Golden Tee 98/99, World Class Bowling, and Shuffle Shot). Most likely because it's designed to be played with trackballs...
It actually supports 2 players each with a trackball and 5-buttons, so a really unique control panel is required.

I recently put together my own conversion after picking up a reasonably priced Golden Tee 99 PCB. 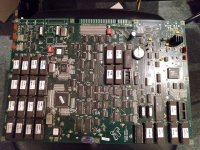 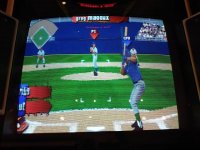 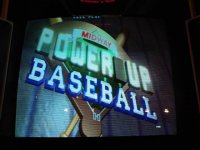 The conversion is mostly just a ROM swap though there are some SMD Jumpers that need to be changed and some of them are located in really annoying spots.
instructions here: https://github.com/DickBlackshack/PowerUpBaseball/blob/master/docs/PCBGuide.txt

I'm curious if anyone else has tried this. I haven't really been able to play it due to the trackball requirement.

Though strangely the location test cabinet photo from the article shows it with joysticks and only 4 buttons per player:

The game definitely references "Trackballs" in the instructions and test mode, so they're not some weird rotary encoder sticks. It makes me wonder if later revisions of this game simplified the controls.
S

One of the programmers, Brian Smolik, was recently interviewed on the VGHF hosts. I don't recall him mentioning anything other than trackball controls for the game, so dunno what's up with the photo.
https://gamehistory.org/ep-18-the-lost-power-up-baseball-with-brian-smolik/

Nice as usual my last donor board went to @drfunk2k for peanuts just before this got dumped and now it's on the radar again...

Episode 2 of this new (and pretty well done) TV show covers it as well.

I finished mine this weekend. Like you, I have no trackball to hook up but was curious enough that I ordered one.

Scummy. But I blame the hype machine, influencer YouTooberz, Vice etc. for fueling these opportunists.

djsheep said:
Scummy. But I blame the hype machine, influencer YouTooberz, Vice etc. for fueling these opportunists.
Click to expand...

I'm fine with pinning all the blame on Vice.

That Vice episode was pretty good, I even like that series they are doing. I'll say that this game looks like dog shit and judging from the company that made it, I'm sure it is.

Talk about charisma their CEO must have had...

He’s lowered it several times. $875 now. I offered $5 and now $10. Maybe he’s reading this here. Hey dude. You burned roms and put them on a cheap golf pcb. Stop listing it as unreleased and pretending it’s authentic. I don’t care if you sell it converted maybe make a little margin but it’s 80 in parts tops.
Last edited: Mar 14, 2021
You must log in or register to reply here.
Menu
Log in
Register
Install the app
Top