As some of you probably already know, there is a graphics problem on certain hardware in Taito's F3 system.

Let's put the situation in context:
Some of the first pcbs of the F3 system, specifically those that came out between 1992 and 1994, were designed as single-pcb and there were two different revisions of them. As @undamned called on his blog:
http://therealundamned.blogspot.com/2009/08/taito-f3-pcb-101.html 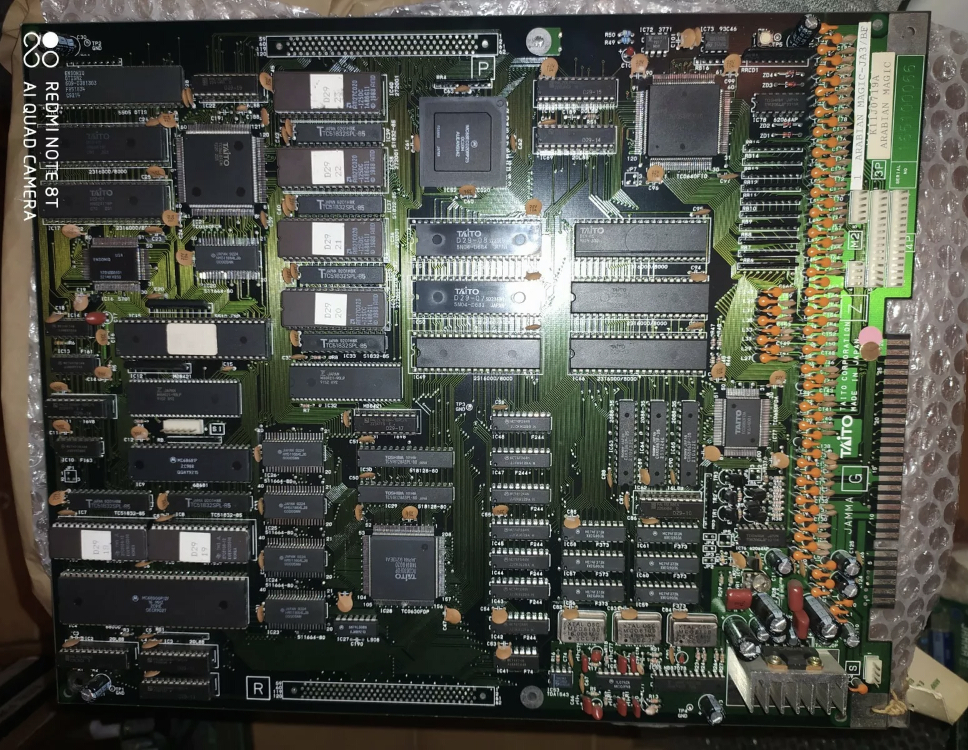 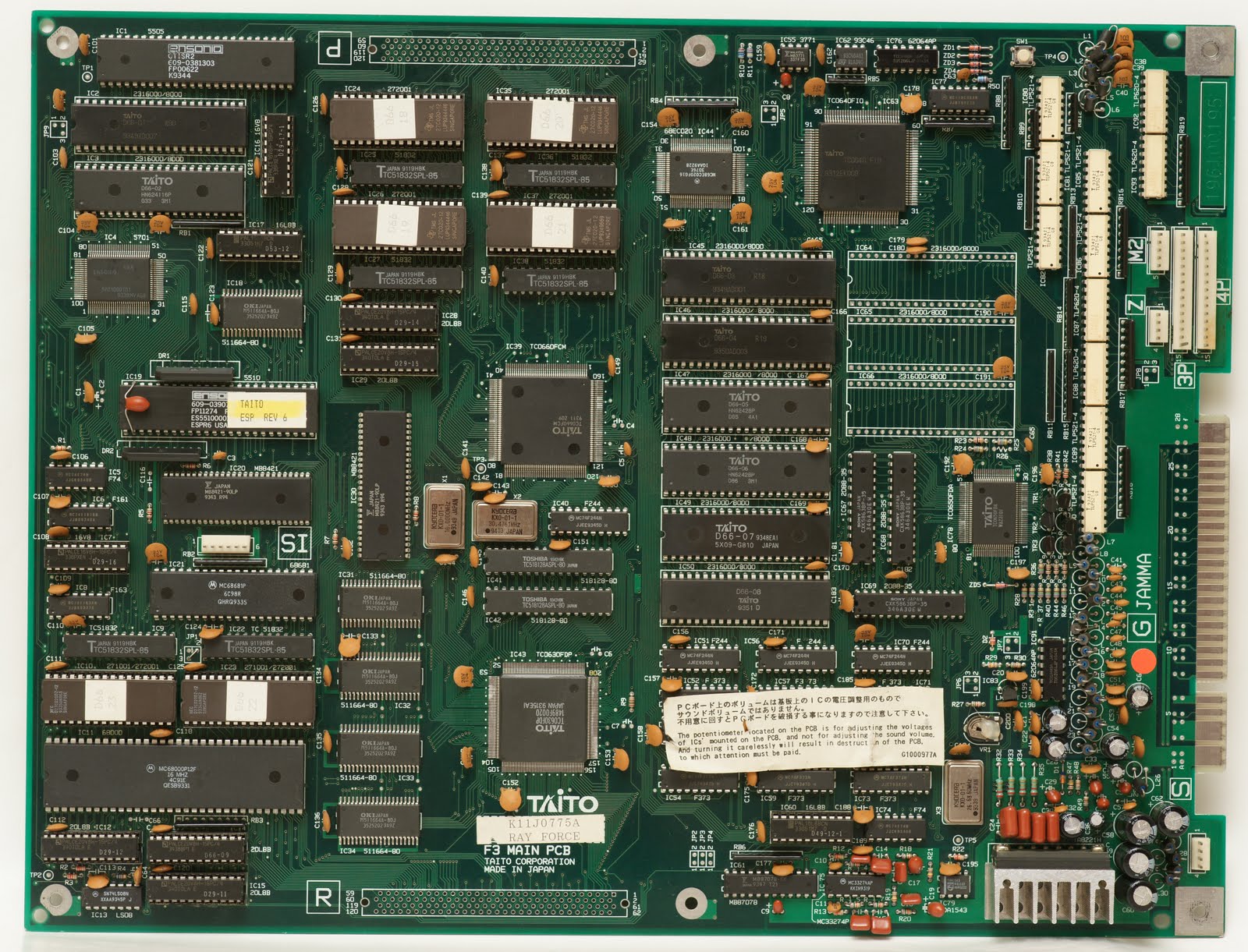 However, before transitioning to the motherboard and cartridge model, some of the latest games were released using the first revision (orange components) of the system, reused or converted to run some of the games originally designed to run on pcbs of the second revision (white components). You could say they were factory-conversions. The games that I've been able to identify in which this was done are: 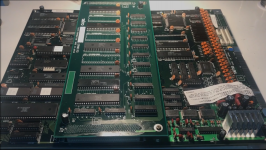 To do this, Taito used an “Expand PCB” mounted onto original revision 1 board using two connectors on each edge of the board. This was done because we suppose that the original mask-roms of the games (arabian magic, Riding Fight ...) were not extracted from the pcb for reasons of saving time or money, and instead they used the "Expand PCB" to place the roms of the new "converted" games, as they didn't fit on the original board.
In addition there are several factory-patches made on the solder-side of all of them to cover some additional addressing that the old board (orange components) did not originally cover, but that the next version of the board (white components) does: 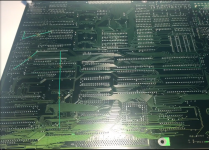 So far so good, but it's well known that specifically these games using "expand pcb" have a problem of "color bleeding", in which it seems that there is a blur effect that goes from left to right, (and from bottom to top in gunlock, vertical game), a problem that doesn't occur in other games like grid seeker, arabian magic ... using exactly the same base hardware (weird?!). (More info here: https://shmups.system11.org/viewtopic.php?f=6&t=50619): 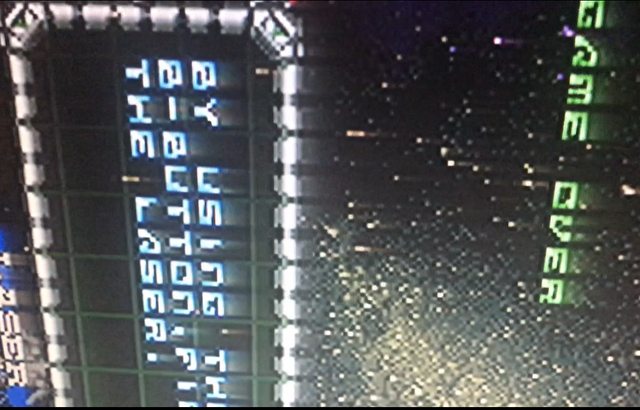 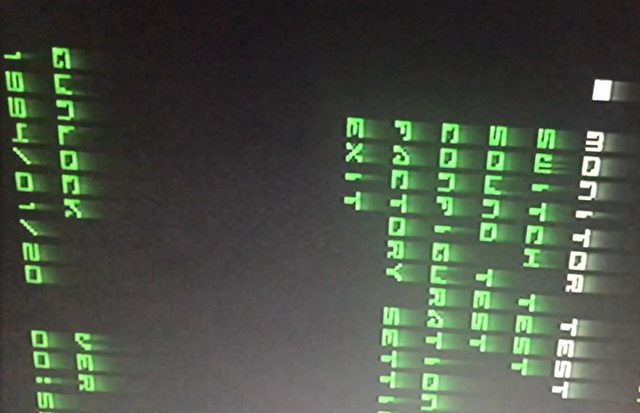 This made me suspect that there must be some differences between the components used in pcb of each game, apart from the "Expand PCB", and that difference must be located in the analog video output stage, since the effect is visible in every single layer of graphics in the game: both sprites, text and backgrounds. 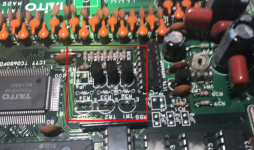 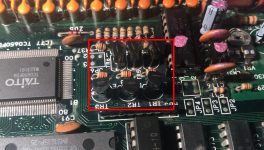 Components originally installed in Grid Seeker:
So, I didn't hesitate and looking those “correct” references on my Grid Seeker pcb, I purchased the components.
After waiting over a month (ughh) for them to arrive to my door, I finally had them available to try.
Obviously, instead of testing that in Gunlock's pcb, a Super Taito Cup Finals with “Expand PCB” was the first pcb chosen to test whether using the correct components that were originally mounted on the first F3 boards would make the annoying bleeding effect disappear...: 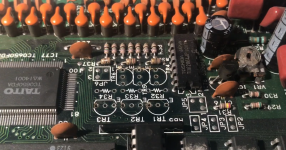 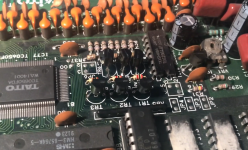 Once the "original" components had been installed (like the ones we saw in the Grid Seeker), let's see if the result was successful:

Seeing that was successful on Super Cup Finals pcb, I decided to do it also in Gunlock pcb and results are obviously the same and lot better than the previous one: 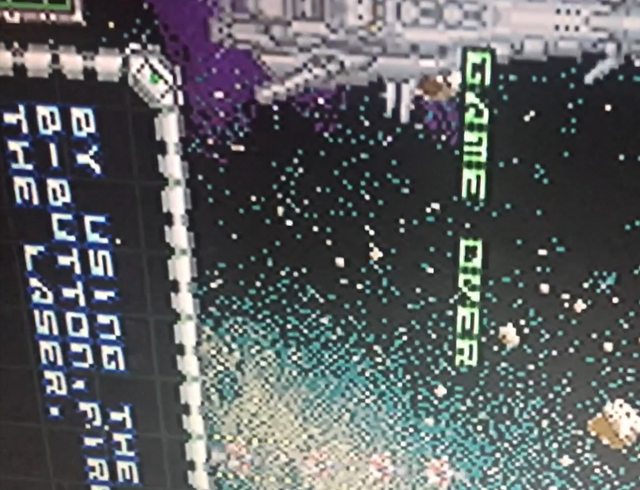 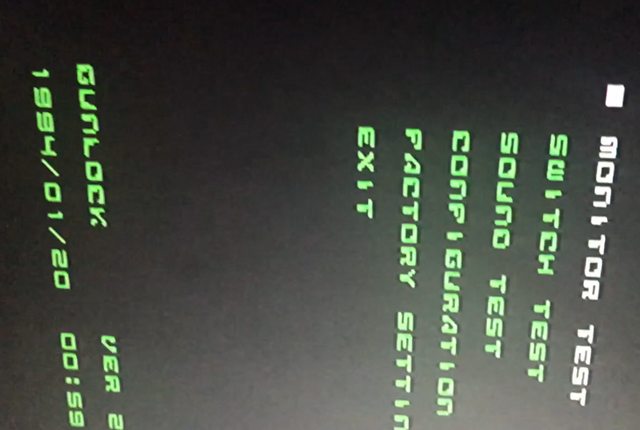 Sharp and colorful image as any other F3 game!


I do not know if this change of components was made for compatibility with European or USA chassis or if there was simply no stock of those components and a cheaper workaround was carried out.


If you have any of the pcbs involved, don't hesitate to fix it!

PD: I also made a YouTube video explaining this (only in Spanish, sorry

Just ordered the parts on ebay for my Gunlock!

Nebula you are a life saver!

Killingbeans said:
Just ordered the parts on ebay for my Gunlock!

Nebula you are a life saver!

Glad it helps you. That game deserves to be played in top conditions!

Gunlock running on my Egret II with no color bleeding 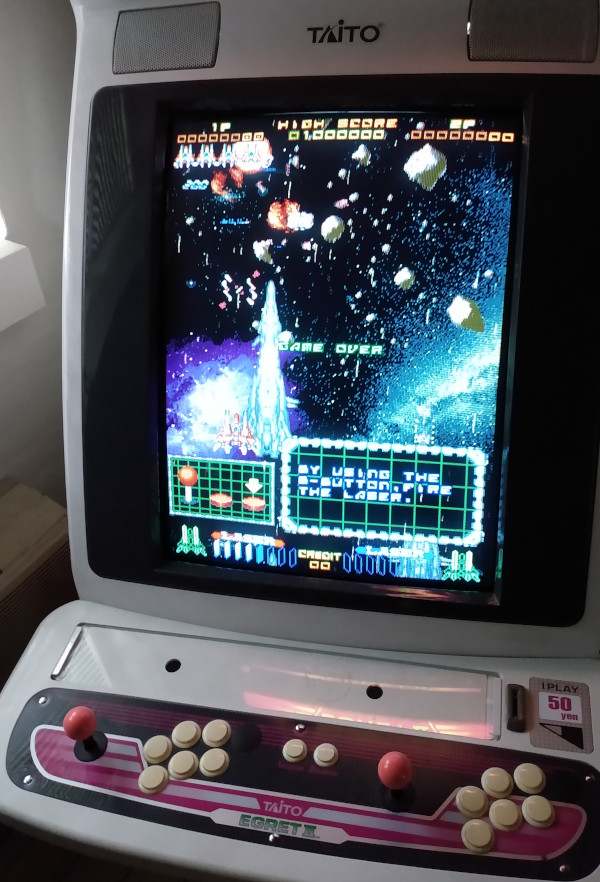 Not my best soldering job ever. All of the components has a pesky connection to a ground plane, so don't do this unless you have a good soldering iron and/or the skills not to fuck it up

What is going on with the buttons on that control panel?
K

Wadda ya mean? There's a kick harness underneath, but it's not connected to anything at the moment

he's probably talking about the alignment, which should be like so: 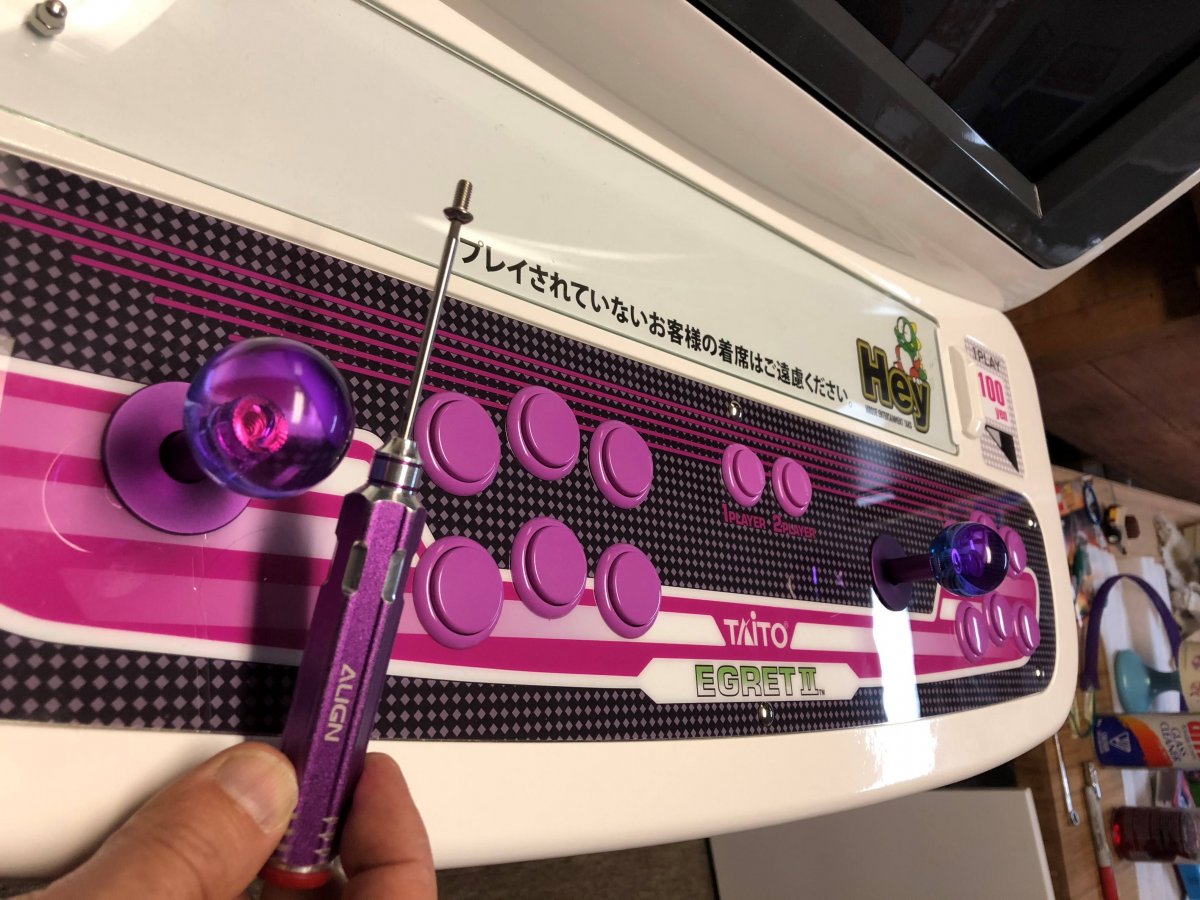 Ahh I see. It was like that when I got the cab. I'm not complaining. I actually prefer it that way.

It also has a 7th hole that is blanked, so you can set up for both jamma, neo geo and 6-button fighters. In many ways I'm a purist, but not when it comes to control panels

EDIT: When I do a picture search for Egret II, I get a mix of both alignments. Maybe non of them are more "official" than the other?
Last edited: Sep 15, 2021

Killingbeans said:
Gunlock running on my Egret II with no color bleeding

Not my best soldering job ever. All of the components has a pesky connection to a ground plane, so don't do this unless you have a good soldering iron and/or the skills not to fuck it up

Congrats! enjoy that masterpiece in its full glory

Killingbeans said:
EDIT: When I do a picture search for Egret II, I get a mix of both alignments. Maybe non of them are more "official" than the other?
Click to expand...

You know what? I think you might be right! and looking at the manual, yours appears to be more like it than mine! 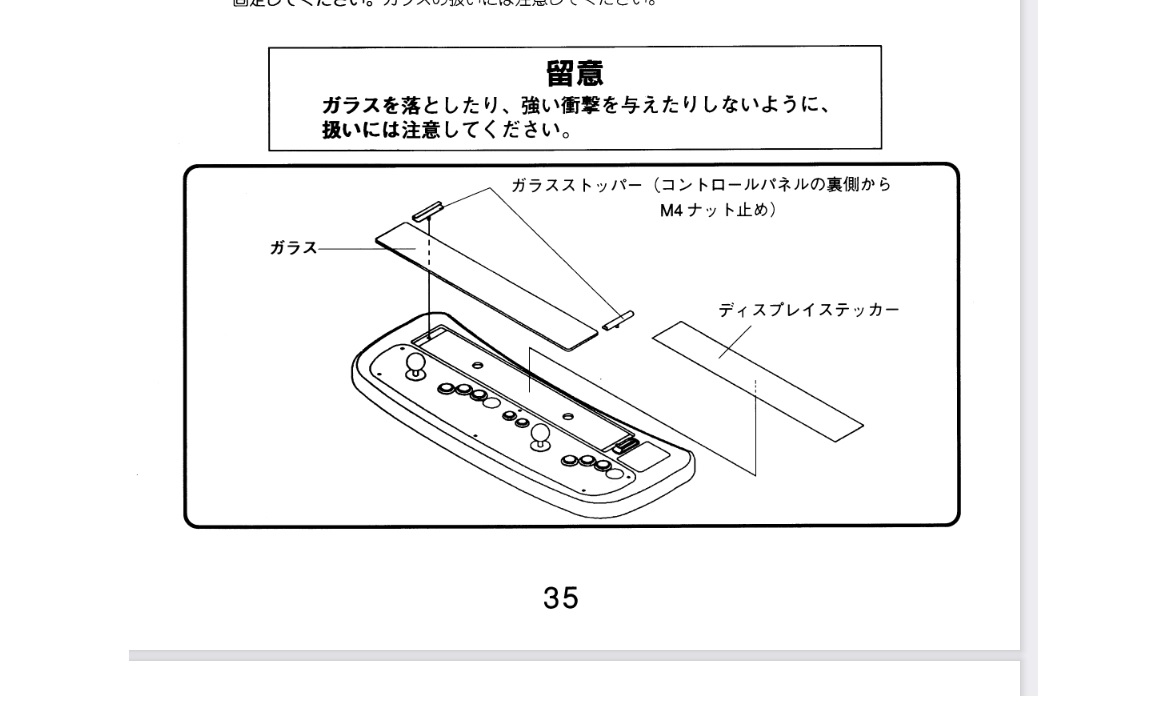 the bottom row seems weird to me, button 4 should be slightly to the left of button 1, but instead it's between 1 and 2, it's like the button layout has been rotated 45 degrees counter clockwise.

Killingbeans, I'm not the most well versed in Egret II but It looks like you had a 4 button panel and someone added the bottom row, but not in the usual positions. 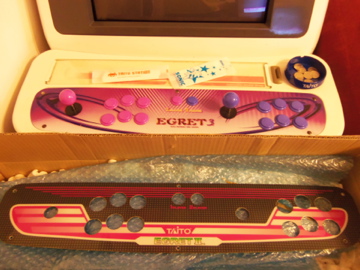 twistedsymphony said:
Killingbeans, I'm not the most well versed in Egret II but It looks like you had a 4 button panel and someone added the bottom row, but not in the usual positions.
Click to expand...

This one from the Arcade Otaku wiki has exactly the same layout: 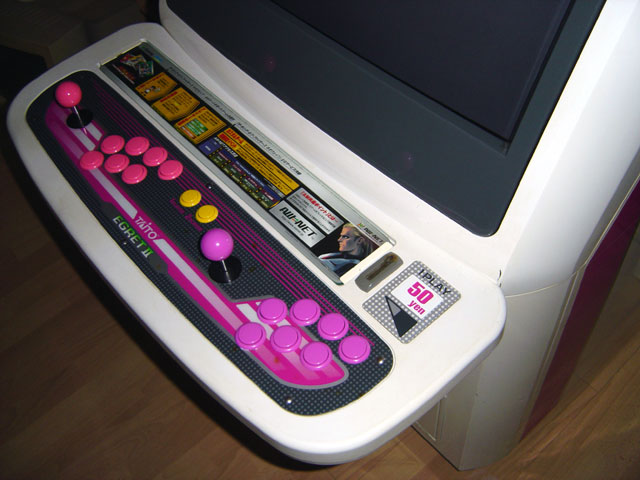 Only difference is that I don't have the "Neo-Geo" buttons installed. Just a black plug.

BTW, sorry for hijacking the tread with all of this Egret II talk

Taken from the official part list of Egret 2, there are 4 types of CPOs: 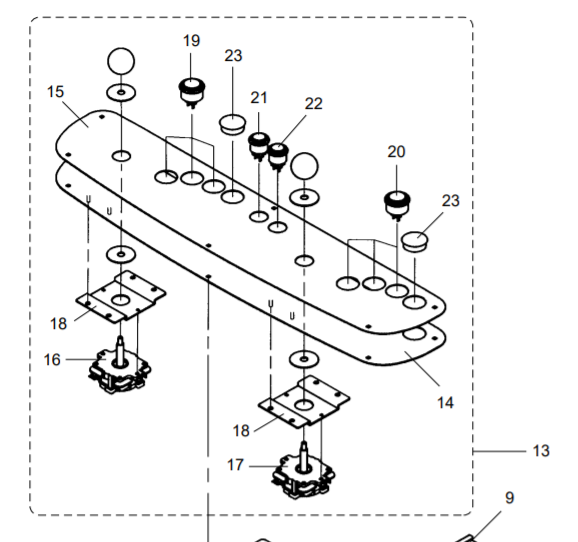 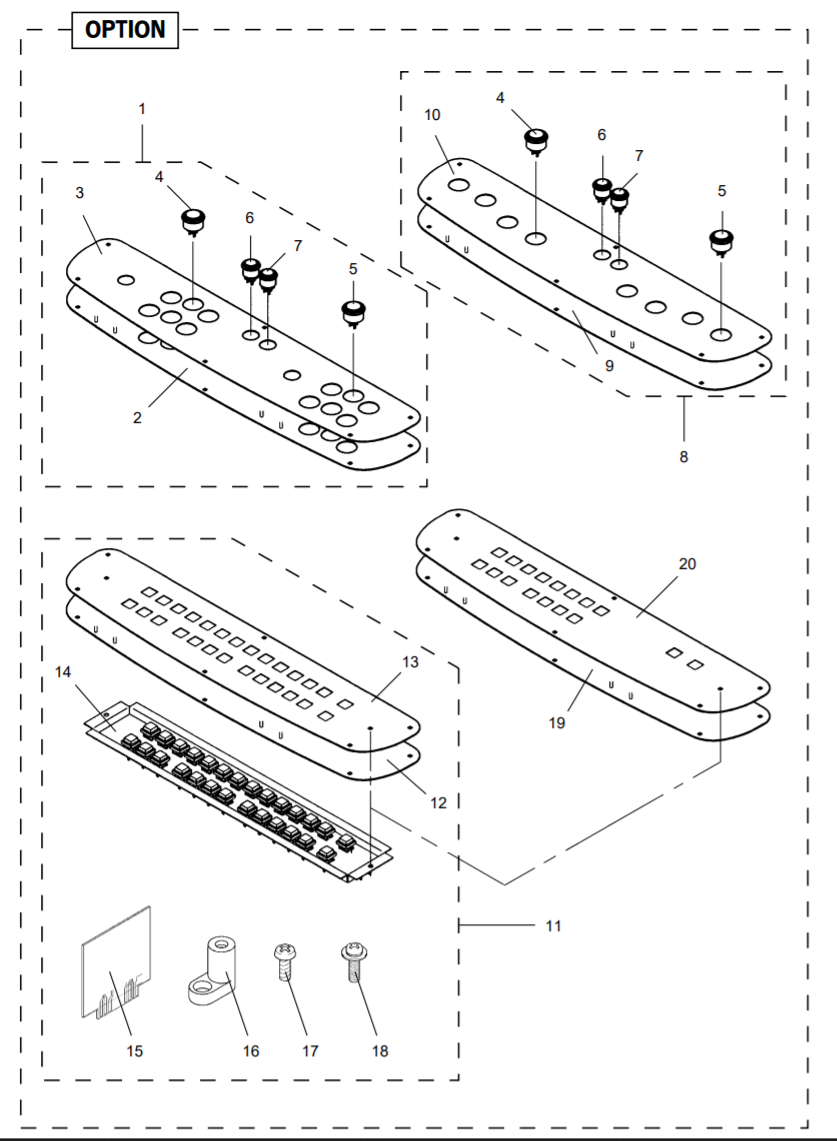 I have both 2L8B and 2L12B, and the one from @Killingbeans is definitely the factory 2L8B one (due to the curvature of the first row of buttons) but with the second row of buttons added later following the same curvature.

This is my 2L8B factory one:

Thanks for the heads up! That was a typo. You can clearly see the resistor color bands as "red-black-red" on the new replacements.