Hey guys! Recently did some repairs on a Sony 1271Q PVM and there very little information available to the public. So I wanted to share my experience with everyone in hopes that someone may find it useful and be able to save their own.

When I received the PVM it was obvious it had been through Hell and back, and some serious issues were occurring on the deflection board. Linearity , pincushion, h amp, you name it and there was an issue with it. 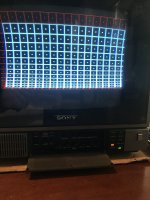 So I reached out to Andy King, whom is very knowledgable about CRT repairs in general and hosts lots of public information of his website about repairing and maintaining CRTs. There was no information on this model PVM on his website and Andy said he had never worked on one before. But regardless, had some amazing tips and pointers on places to start looking for problems. One thing he mentioned may be causing the pincushion issue was loss of power going to the IC from a failed voltage regulator (IC504 on this model). It is supposed to generate 12v and send it to pin1 on the Pincushion IC. After probing pins 1 and 2 (for ground) see that we are getting perfect voltage, so thats not the problem.

So turning to the actual trimpots themselves.....these are really old open air trimmers, the type you would see in electronics from the 70s-80s. Very prone to corrosion and failure. 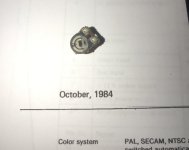 SO as I start to probe these guys across legs 1-3 Im noticing that none are at the proper resistance and a few are open circuit?! THis cant be right , so i take some out of circuit to test further and confrim this to be true. Something was so out of wack it fried a few of these. Probably a board full of bad caps.

Most of the time trimmers don't out right fail, well this wasn't the case on this old bird. Two of them were reading 0L and most of the rest were WAY out of spec. Any time you tried to make an adjustment, the screen twisted and bounced around like you wouldn't believe, and some made no changes at all. So I went over the schematic and made a list of every single trimmer on the D Board.


After replacing the bad trimmers, i was able to get some movement and control aspects of the Deflection circuit, but it was obvious the source of the problem that caused them to fail was still there.

Now to start pulling electrolytic capacitors and testing them for ESR, VLOSS, Capacitance. Every single one is an Elna, rated at 85C. I wont bore you with the ratings of every single cap but heres the take away: most of the 4.7-1UF caps were still within operational specs (but failing), but the large capacitance caps were gone. I couldn't even get reading on a few of them. Every single 330UF was bad. Heres a list of all the Electrolytic on the D Board and I make notes of the ones to look for that caused me issues.

-
Last edited: Sep 8, 2022
You must log in or register to reply here.
Menu
Log in
Register
Install the app
Top