THIS IS A REPRODUCTION PROJECT MADE BY @caius ALL INFORMATION HAS BEEN POSTED WITH HIS PERMISION. CREDIT AND MERIT GOES TO HIM.

As many of us know (not only long term arcade collectors/enthusiasts) Toaplan manufactured few but excellent games.Some of them can be considered real masterpieces like Out Zone and Truxton for example.Going into technical details four of them are united by the fact the hardware uses a custom IC to handle inputs: the  ‘HK-1000’.I have partially covered this argument in my past repair log of Tatsujin Oh, you can read it here: Tatsujin Oh repair log

As said in the above post, two revisions of the HK-1000 were made with same functionality but different package.The first one was ceramic hence very fragile.This is used on Truxton II/Tatsujin Oh and FixEight: The second one is more robust and it’s adopted on Ghox and Pipis & Bibis : 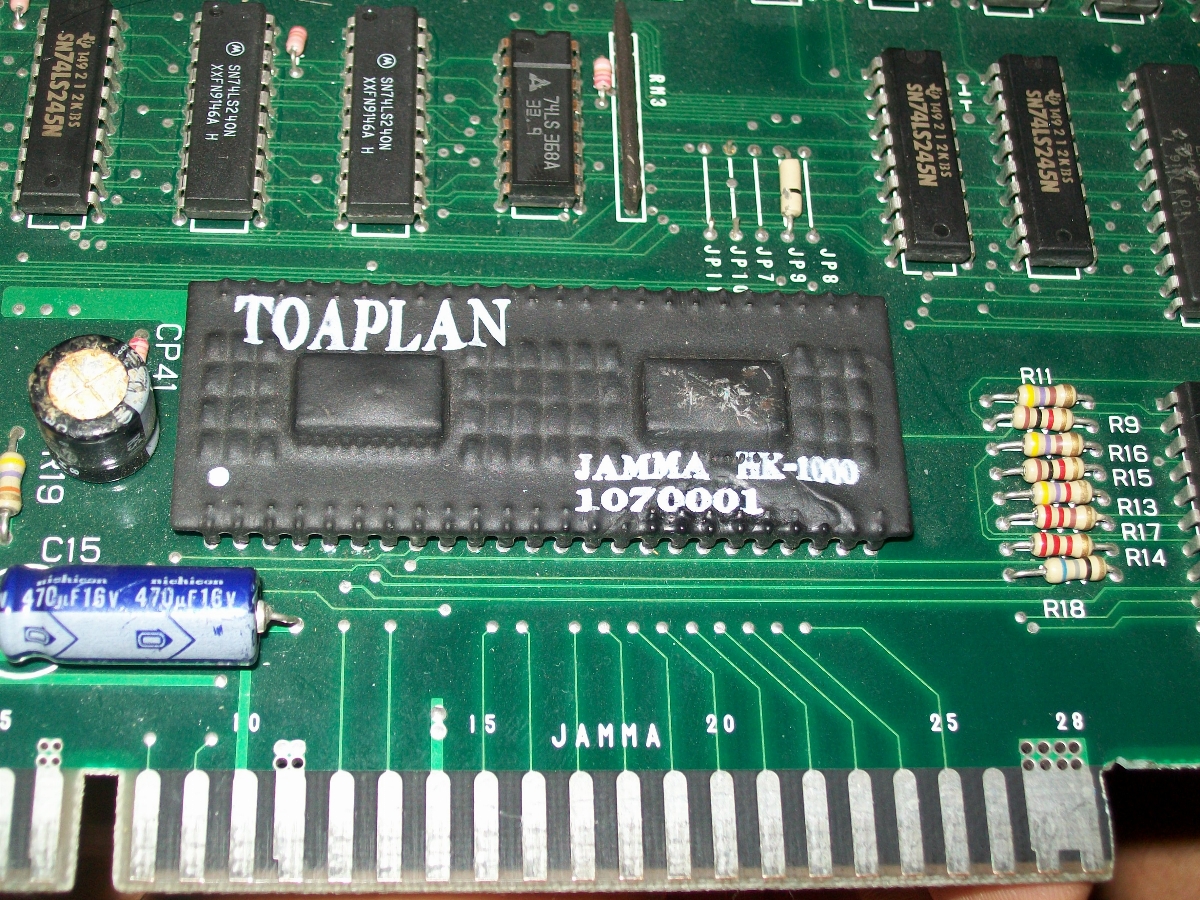 If this custom goes bad (like it happens very often especially on first revision) you will be no longer able to fully control the two players and in the worst of cases the board will be stuck on a TILT message.The only option could be find a donor board but we are speaking of valuable PCBs even if faulty.So some kind of replacement was needed.
There is very few info and documentation about this custom but it seems Toaplan engineers embedded on a single IC (the HK-1000, indeed)  all the circutry they used to  handle inputs (but also coin counters/lockouts) on previous PCBs  (Wardner, Out Zone, Rally Bike and others too).I took inspiration from an Out Zone PCB to study the design: 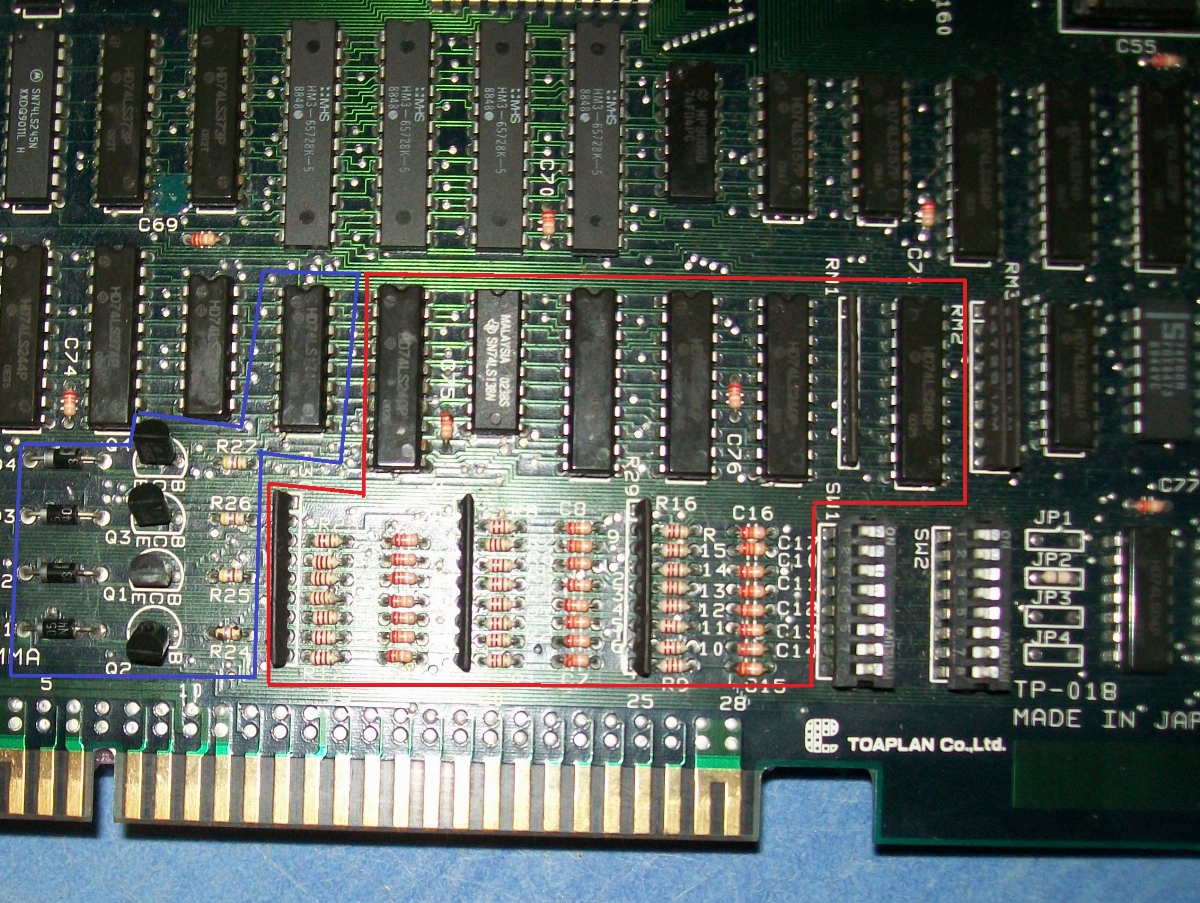 As you can see from the above picture, I highlighted two sections of PCB : the blue one concerns the circuitry for coin counters/lockouts handling, the red one is for inputs (players direction and buttons, TEST, SERVICE, TILT).With this knowledge I started my tests.As testing platform I used a Pipis & Bibis PCB (the cheapest one which carries the HK-1000).I removed the custom and mapped some inputs following the above mentioned design: 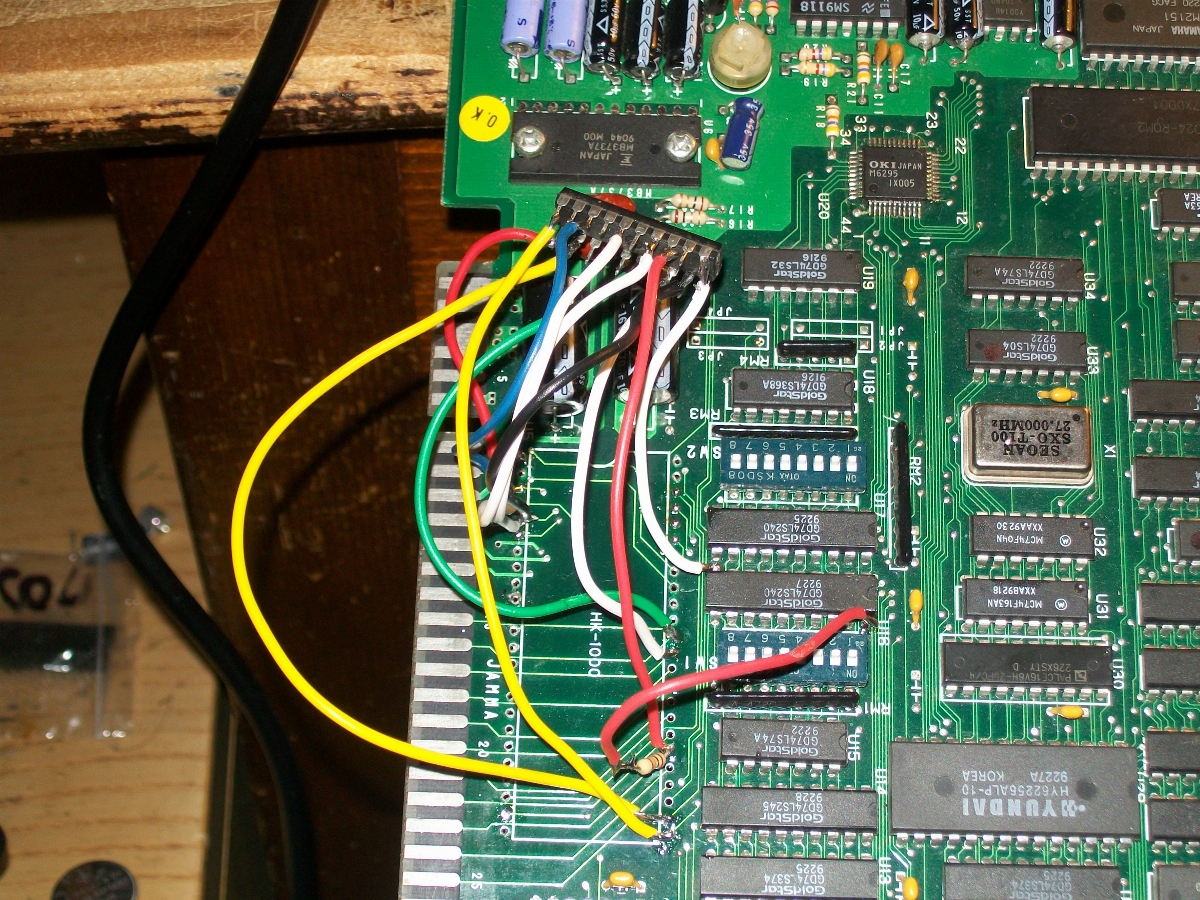 This was successful so I started to draw and route schematics for a real replacement.I voluntarily omitted from my design the circuitry for coin counters/lockouts as it’s not a vital part (although I figured it out so I can implement it in a later moment).I sent the layout to a manufacturer and after few days I received the bare PCBs: Very few components are needed to populate the PCB :

Three 74LS240 in SOIC20 package
Three 100nF ceramic by-pass capacitors in ‘0805’ package
Three (two 9 pins and one 8 pins) 4.7Kohm SIL bussed resistor networks for inputs pull-up (I opted for thru-hole ones to keep cost down, they can be salveaged from arcade PCBs)
Two strips of 24 pins male rounded machine-tooled pin header with 2.54mm of pitch.The corresponding female ones must be used on the arcade PCB.

Here is final result after 5 minutes of soldering: A comparison with original custom: Testing on the Pipis & Bibis PCB was successful, all inputs of both players were correctly mapped and working as well as TEST, TILT and SERVICE ones: 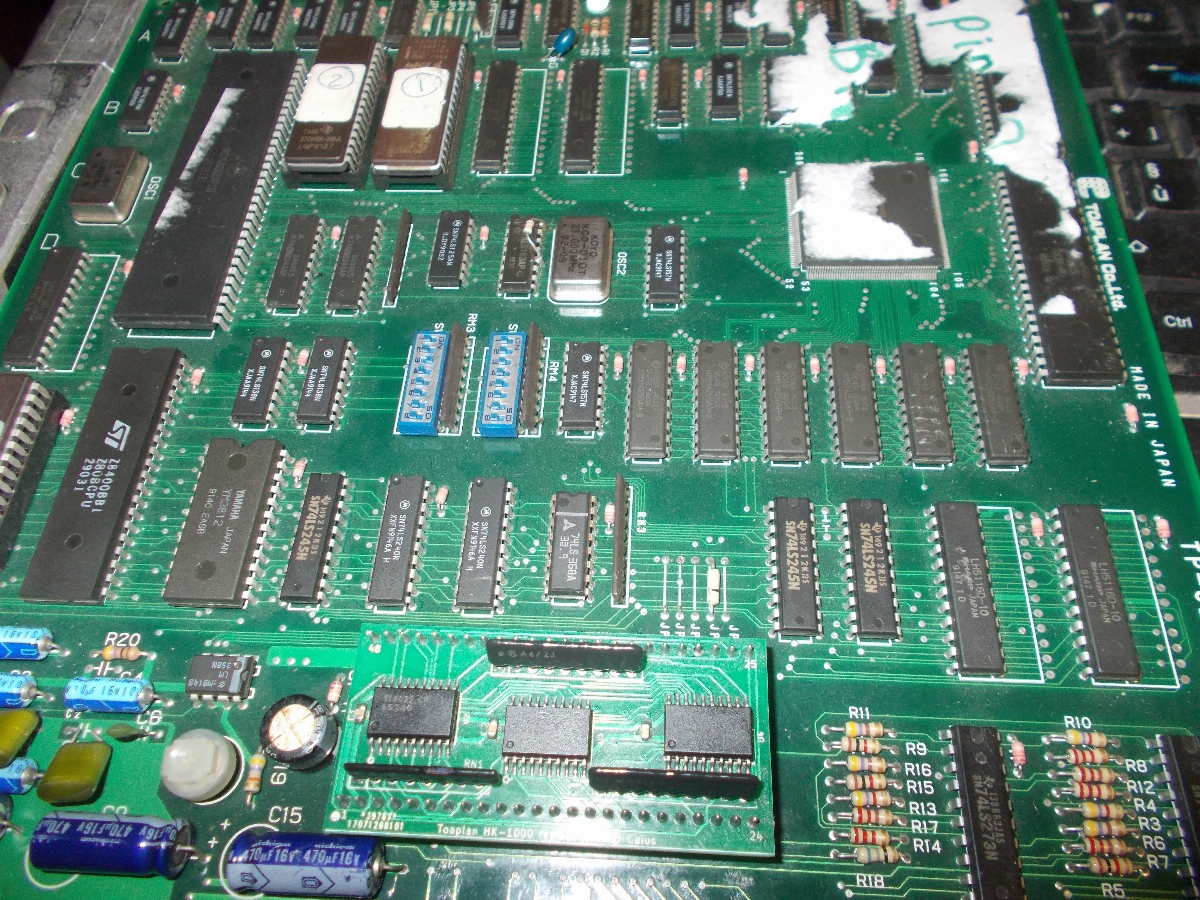 As said, this is not a 1:1 reproduction of original part since coin counters/lockouts handling has been not implemented for now but it’s enough to salveage your faulty boards from uselessness.Stay tuned for the next reproduction project!

I have to order one of these HK-1000 repros for my FixEight board that has the ceramic package just in case it goes bad. I just wish things like these were more easily accessible to purchase on a webstore or from US side vendor for faster/lower cost shipping.

I am interested as well, same reason as Derick, just in case my HK-1000 goes faulty.

Thanks to you and enoy your working board!
Last edited: May 2, 2018

How did I miss this? @caius, nice work my man. Those things have been such a bitch to try and fix on the enclosed one, so damn brittle.

I have a Truxton II that isn't working, and people keep suggesting that I replace the HK-1000 with the custom reproduction.

But from what I can read here, the IC is mostly handling i/o stuff, so I'd assume that even if there's an issue with it on my board, it would at least still turn on, right?

My pcb currently does absolutely nothing when I power it on. No image, no sounds. Am I correct to assume that replacing the HK-1000 at this point would just be a waste of time, and not able to fix my issue?

If you get a black screen, the problem is elsewhere hence replacing the HK-1000 will not fix it.Probably you must reflow the GP9001 custom ASIC since it generates all the video timing signals.
But if you get a static garbage screen on boot then the HK-1000 could be the issue since it's involved in main CPU data bus too.

Haha man, that sounded all cool until I took a look at said IC, and it's this massive SMD chip with a billion tiny pins. I could splash a bunch of flux over it and carefully run my soldering iron over it, but I'd be deadly afraid of just making things worse. It's not a risk I'd be willing to take without a way to gauge if that's actually where the issue is in the first place.

What more is, it seems someone might have already attempted this. I can see a lot of markings around that chip from what seems to be flux residue.

Crap, I thought I was about to get an easy fix with another amazing @caius chip, but not this time.

I bought an untested Pyros. Boots into demo, but any coin-up results in immediate "TILT" and reboot.

I assume it's the area in red that you used to create the HK-1000, but any tips would be appreciated.

You can find some hints in this repair log of mine :

By the way, in these days I've updated the design my 'HK-1000' reproduction adding the circuit for handling the coin counters/lockouts that was intentionally missing in previous revisions, here's attached a preview of the new board.This will be the final revision available in some days

Last edited: Jul 4, 2020
You must log in or register to reply here.
Menu
Log in
Register
Install the app
Top