Hi, could do with some help here please.

Running fine aside from two issues.

Issue 2. Main character sprite has no animation and cannot jump. He can move left and right and glide across the screen and that's it.

All I've tried thus far is reseating and verifying all EPROMs. It's running the Japanese new set and all verified good. 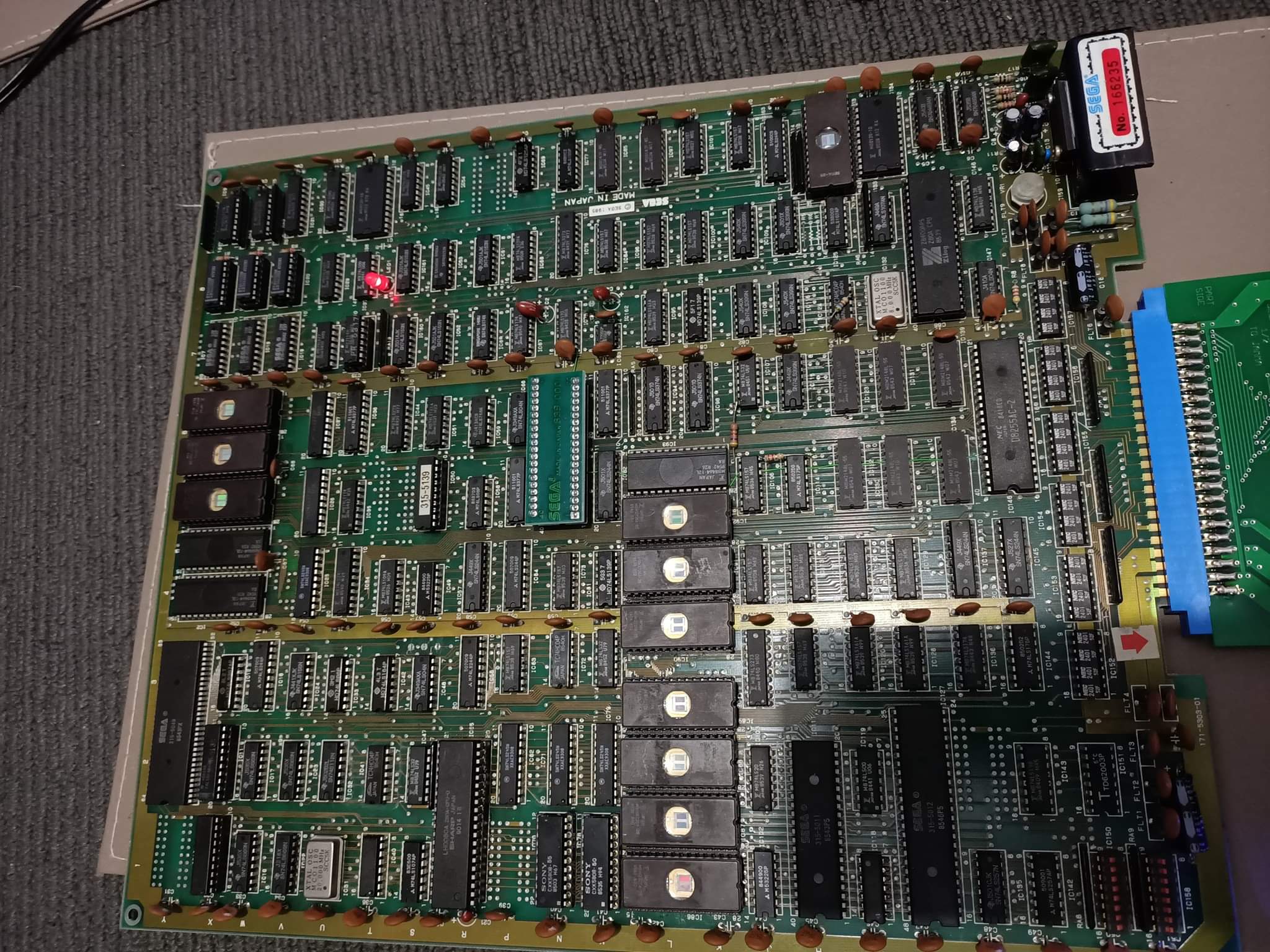 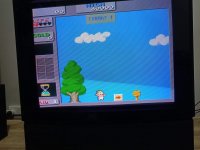 Lots of different issues... Do you have a logic probe and a multimeter? You're going to need both...

I'll help you out if I can, but you'll have to beep a lot of things for me

Beep beep, I have a multi. No probe sadly.

I also have a completely dead (black screen) Choplifter I'd be prepared to harvest parts from.

I'm not familiar with this board so we're going to just do some basic diagnostics to help rule out some issues.

You can use these techniques for simple board issues, they cover some common stuff.

Audio
Let's check if the amplifier is working. It's easy!
Turn the volume potentiometer to the middle point and turn on the board.
Now run your fingers under the amplifier and surrounding capacitors. Got some crackling/buzzing sound? If so, your amplifier is good.
No? Let's rule out the potentiometer. Set your multimeter to resistance mode and at least 2 kiloohm range. Check the resistance between the middle pin and the other two. Move the pot to different positions and verify that the resistance changes. If it all checks out, the pot is good.

Controls
Let's see where the jump button goes and make sure the board is receiving the input.
From the JAMMA edge connector follow the traces that go from the button inputs to the board. You'll arrive at one of the resistor arrays right next to the board connector, marked RAxx, xx being the reference. The resistor arrays will have markings. The number is the resistance between pin 1 and each of the other pins. E.g., if it's 4.7 it should be 4.7 kiloohm. Turn the board around and measure the resistance between pin 1 and each of the others. They all should be around the stated value. If any are grossly different the resistor array needs to be replaced. It acts as a pull up on the input signals so when you press a button the signal actually goes low.
If the resistor array is ok, follow the trace to the NEC ICs nearby.
These are optocouplers. They isolate the board from voltage spikes coming from the inputs.
You'll need help for this bit as you'll be using a multimeter and pressing buttons at the same time.
Set the multimeter to voltage mode at a value over 5v. Place the black probe on ground (on the connector for instance).
Place the red probe on the pin where the input goes. Measure the voltage there, it should be around 5v.
Press and hold the button. The voltage should be zero.
One of the pins on the opposite side of the one you've identified as where the jump input goes should toggle as you press the button.
Check the datasheet to see which one.
Repeat the process for the pin(s) on the opposite side. If they go from 5v to 0v, they are ok. If not, replace the optocoupler.


That's it for now. A logic probe helps immensely for this type of thing, try to get one when you can.

You need to check all the fuji's for dead outputs.
Same with choplifter, it's loaded with them also, all sega / konami of this time are like this

Hammy said:
You need to check all the fuji's for dead outputs.
Same with choplifter, it's loaded with them also, all sega / konami of this time are like this

@Frank_fjs ... and that's why you need a logic probe

Yep, I dread Fujitsu's. I'll start removing and socketing them.

Arcade repairs aren't my forte and I don't have the time to acquire another skill lol, yet alone arcade repair.

It's for Isy, he's not fussed either way but if I can stumble upon fixing it all the better.

It will bullet proof the board if you replace them all.
Just make sure to check all lines before re-fitting the new non-fuji replacements.
Don't use china parts get your TTL locally to avoid fake.

Too many sockets will cause issues too, best to solder TTL's direct i have found.

Hammy said:
Too many sockets will cause issues too, best to solder TTL's direct i have found.
Click to expand...

That's true.Most of cheap sockets are unreliable causing bad contacts unless you use round machine ones but this would cost a fortune so, yes, it's better to solder TTLs directly on board.Choose manufacturers like Hitachi, their TTLs are bomb proof.

Hammy said:
Too many sockets will cause issues too, best to solder TTL's direct i have found.
Click to expand...

I have boards with 100+ sockets.
Of course with time (corrosion, dust) it will multiply problems.
You must log in or register to reply here.
Menu
Log in
Register
Install the app
Top