Another Nanao MS8-26SG thread, or is it MS8-26A? Questions about components

Hi again!, having recovered the willpower after doing the recapping and repair of my other Nanao MS8-26SG, I decided to start working on the MS8-26SG from the other Aerocity, or so I thought, because after taking it out, noticed a label that says it's a MS8-26A:

Anyways, I started checking it out and noticed some stuff the previous chassis didn't have, that raises some questions:

Q1. It has a blown F902 1A fuse that seems to be original, but the monitor was working, that's because from the other side it has a thin wire bypassing it, never saw this, is there a logical reason to do it? have you seen it on other chassis? was that made by a technician or from factory? why they didn't took out the blown fuse at least? also, could be that the wire thickness was chosen to burn if current > 1A?

Anyways, I want to remove that wire and install a fuse, the 26SU and 26S schematics (only models I could find on the net) say F902 should be 2A, but the silkscreen on this pcb says 1A, I bought 1A and 2A fuses and plan to remove the wire, put the 1A fuse, and if it blows, put the 2A, sounds good right? 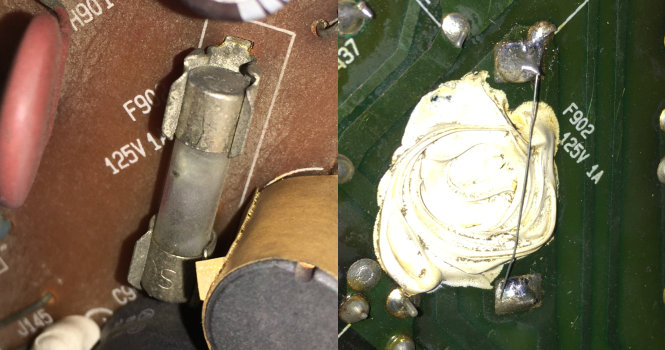 Q2. The chassis has another wire just like the previous one, but at the R570 resistor, the schematic shows a fused resistor, I also never heard of them, but, if it's a fused resistor (and it should be because of its weird shape), why does it need a wire below it? Also, there is other like it but without any wire below... anybody knows something about this? It is right next to the flyback. I guess I should leave it like it is but, I am a bit worried if this means being unprotected to some sort of overcurrent?. 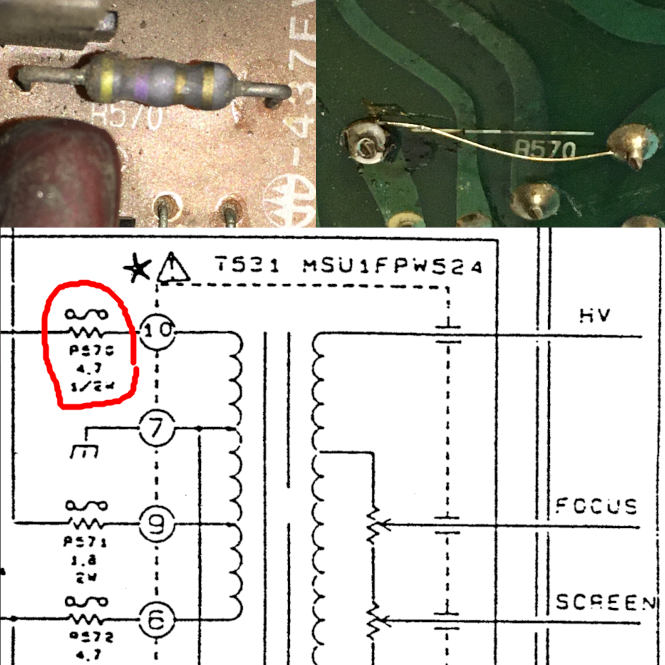 Q3. Next thing is curious, one of the PP capacitors, unlike the others, has like sugar crystals around it, or salt, or acid? I don't want to taste it lol, but it caught my attention, I cleaned it, some crystals were pretty stiff, like if they somehow grew right from the capacitor or something? took it out and measured it and gives the right values, but, have you ever seen this?

Bypassing those fuses is just terrible. Yaton does this a lot. Just do some botch job instead of replacing with correct parts. It's a fire hazard. No legit tech would ever do this. I would definitely remove the wire link below the fusible resistor too. The resistor is probably blown.

The F902 fuse was likely upgraded for a reason on the later models, but I think your plan is sound. Replace with a larger fuse if it blows. I suspect it's going to be fine with 1A though.

I've seen that crystallization in polypropylene caps as well . As long as it reads OK, I haven't seen the need to replace. I think it's just the coating that's disintegrating, but what do I know.

Thanks!, the fusible resistor was blown and the 1A fuse is working fine!, and I have put the PP capacitor back.

I forgot to add another odd thing I found, I left it because maybe it comes from factory, and I don't understand its function, maybe somebody does? It's a 1k ohm resistor installed between the pins where deflection coils connect, not sure if it is the X or the Y but I see it is not between them, just between one axis. 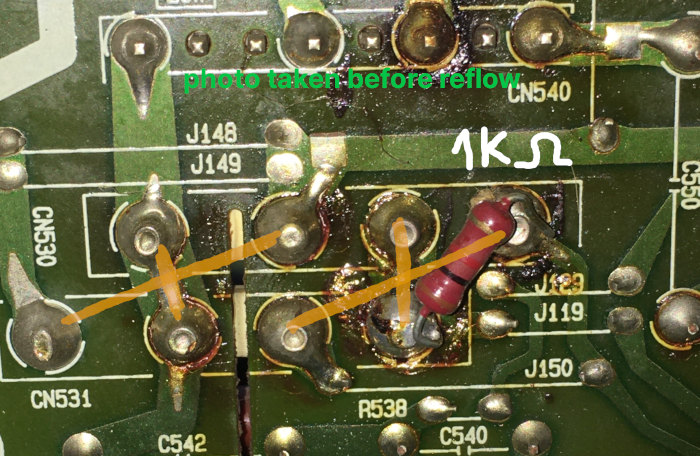 About the recapping job, I can say that the MS8-26SG arcadepartsandrepair kit matched 100% in this "MS8-26A" chassis, there were a few capacitors on it with small variations (voltage/capacitance) to the ones from the kit, but, they were too the only ones with a different brand than ELNA, so I suspect they were replacements and the technician didn't have the exact part, so, I replaced them with the right part thanks to the kit. 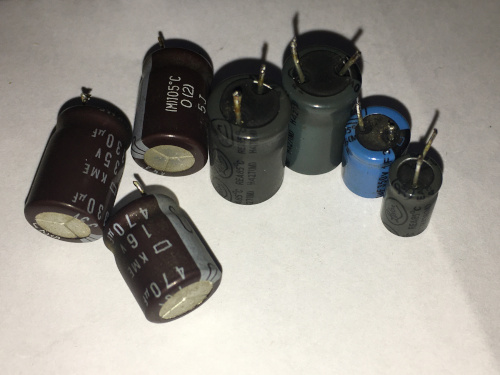 Looking at the "lelon" (chinese brand) ones, I can assume they were put by a technician from around here, but the "KME" (japanese brand), I doubt they came from over here, maybe it was repaired in japan?.

Also, I can't say that this chassis is a MS8-26SG because some resistors (and who knows what else), differ from the 26SG values, and match with a 26A

So, in the end, I don't know, what matters is that it is working right? This time with no surprises!

Things done:
-Replaced 5w working but not good looking resistor
-Replaced all electrolytic caps with nichicon ones
-Cut wire below fuse and install 1A fuse
-Took out non working open 4.7ohm fusible resistor that had a wire underneath
-Reflown many joints everywhere, contact cleaned all pots,...
-Calibrated B+ from 93.4v to 92.2v 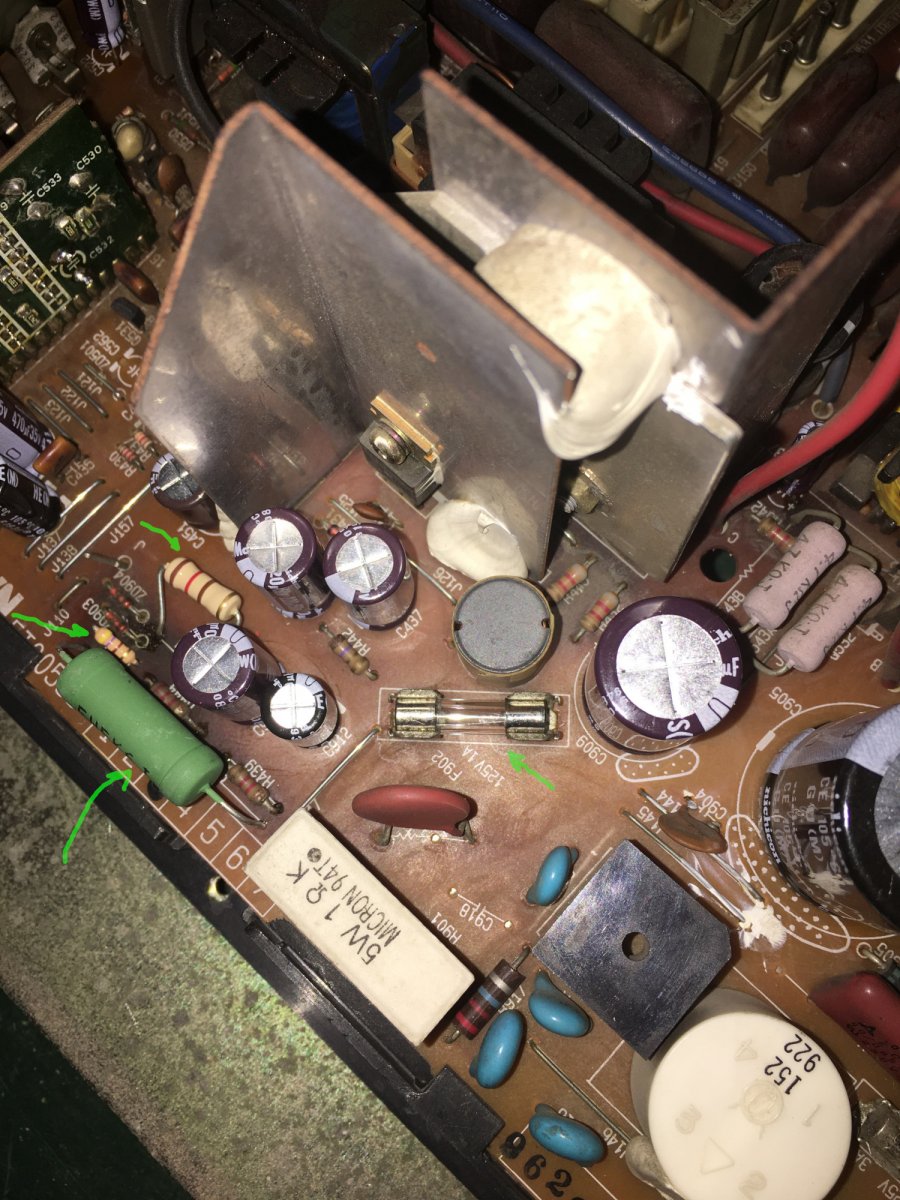 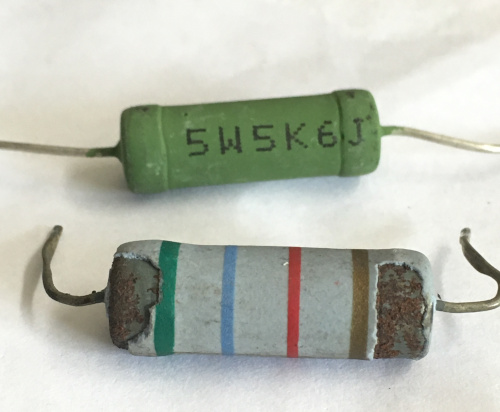 Things to do:
-Put a new fusible resistor once I can get one, pretty hard to get, only could find them at arcadepartsandrepair but I have to order more stuff to make the shipment worth it lol. So meanwhile, R570 will stay being a wire, or should I replace that wire with a non-fusible 4.7ohm resistor?
-Replace some more crusty resistors I don't like but didn't have replacements at the moment

Before the recapping, the monitor:
-Did not turn on when powered on, had to wait some minutes, some days more or less than others
-Other days it would power on but got an absolutely out of focus image that was slowly getting to acceptable focus in around 5 minutes
-Sometimes had rolling vertical image
-Also had to wait minutes for the image to slowly grow to full vertical size

Now it behaves like a healthy monitor, powers on when you power it on, weird stuff is part of the history, working as it should be! (I have to calibrate the colors some more but you get the idea) 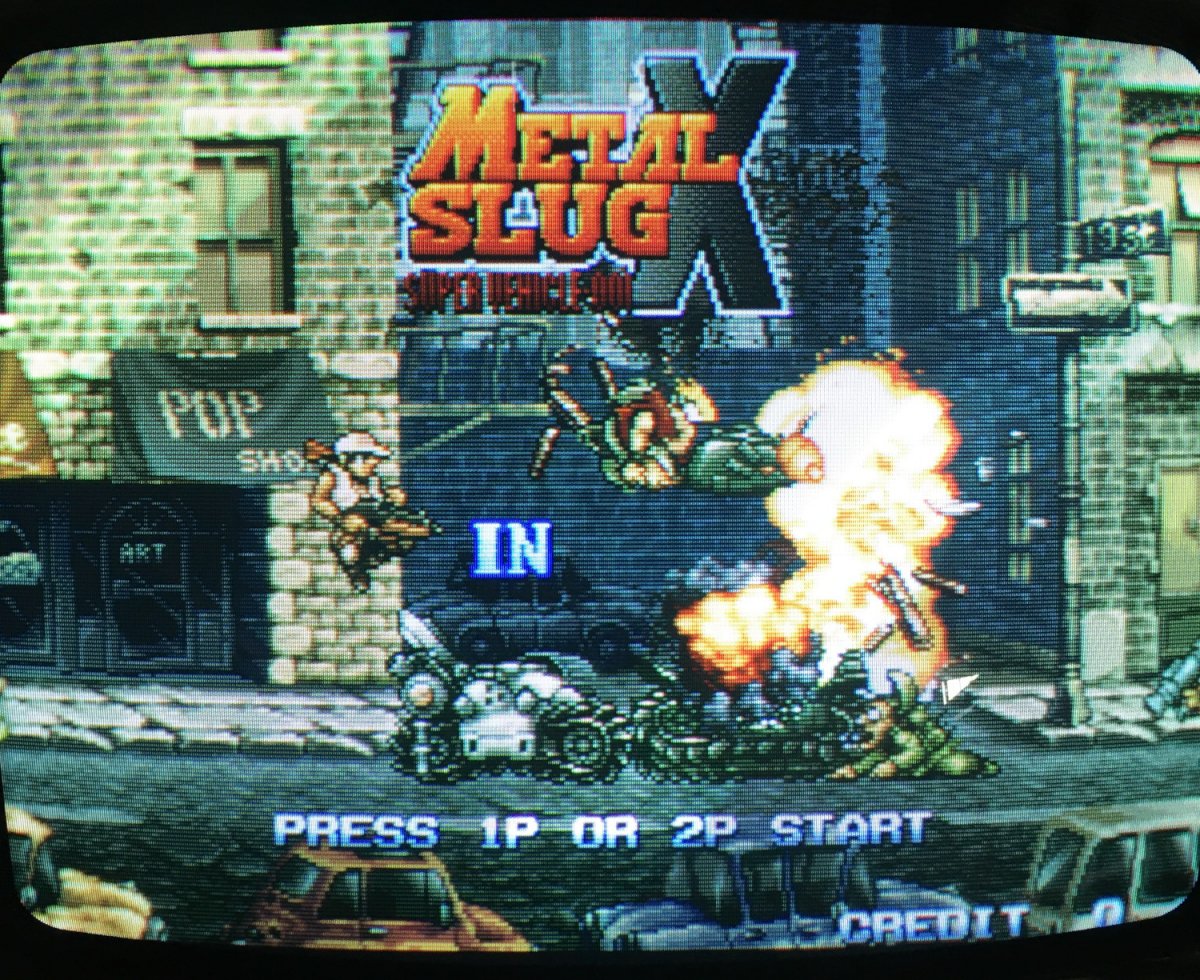 Maybe in the future I will take a look at it's convergence rings.., got some minor color displacement on top corners, but it's not killing me that's for sure!

Thanks for reading!
F

Hi, I have the same chassis (ms8-26sg) with a vertical deflection problem, when I was installing the new capkit I notice this weird fix on C431 and C432, can you help me just confirming that your chassis has both caps installed?

fiti15 said:
Hi, I have the same chassis (ms8-26sg) with a vertical deflection problem, when I was installing the new capkit I notice this weird fix on C431 and C432, can you help me just confirming that your chassis has both caps installed?
Click to expand...

Hi fiti15, just saw your message, can confirm that this chassis had both C431 and C432 present, and both are 33uf @ 100V.
That fix is weird indeed, I don't know why your chassis does not have them, I would remove the "fix" and put some capacitors there, good luck!
F

MagicianLord77 said:
Hi fiti15, just saw your message, can confirm that this chassis had both C431 and C432 present, and both are 33uf @ 100V.
That fix is weird indeed, I don't know why your chassis does not have them, I would remove the "fix" and put some capacitors there, good luck!
Click to expand...

Thank you, I already put both caps and nothing weird happened but I'm still having problems with vertical deflection, the image doesn't display complete vertically, any advise on which components should I check ?

fiti15 said:
Thank you, I already put both caps and nothing weird happened but I'm still having problems with vertical deflection, the image doesn't display complete vertically, any advise on which components should I check ?
Click to expand...

Here are the schematics I could find for the MS8-26 + a service manual https://ufile.io/tzg1f6y8
I think the issue you are having is a "Vertical Foldover", I think it can be related to the capacitors, but you replaced them..
I don't know exactly what to look.. but there are may skillful people over here who might

, you can start a new thread explaining what is going on with some pictures of the problem..
You must log in or register to reply here.
Menu
Log in
Register
Install the app
Top