A list of arcade games that support an optional, unique second screen (not a doubled output):

I have the official 4 player harness that I believe allows one to use two motherboards and split it across two cabs for some of the 4 player games such as KOV. Never tried it though.

I have a couple of the 4 player harnesses for PGM, the kits would come with them.

But they were designed to use one motherboard and split the video to two Jamma connectors.

With the PGM, much like Dunk Dream 95/96, I believe, you can either make an adapter to have 3p and 4p through the harness for same screen action, or have a harness wired to JAMMA which the second cab piggy backs off of.

Namco System 12 boards have two VGA style outputs plus the standard RGBS out on the JAMMA edge.

Dig Fight actually works in Mame and shows both outputs. It's pretty neat. I have to get that going. Could someone fill me in on the pinout, please? The manual is useless.

Didn't feel like doing any real work today, so I decided to tackle this. Armed with some very basic knowledge of what parts are responsible for what things and a multimeter, I figured out some of the pinout for the two games. 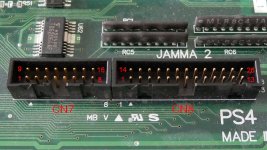 Note that there is no simultaneous 4-player mode in Dig Fight! What a fucking disappointment. What it does give you is:

Versus match is actually pretty fun. Technically you don't need to wire the game up to two screens, just wire up the 3P controls to your regular 2P side. Then do the following: press 3P start twice, press 1P start, choose 'VS Play', and press 3P BTN1 or wait 10 seconds. Everything happens on the same screen, there's no benefit to having two screens.

Bonus thing, you can change the region to World and turn this game into English by cutting the link between the 4th solder pad on JP4 (thank you, Mame driver). 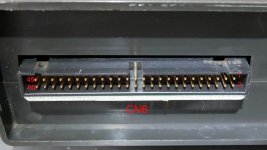 Other twin monitor VS games on a single board:
World rally 2, touch n go by galeco
Some konami gx titles such as rushing hero's, run and gun 2 etc.

Sega drivers:
outrunners and other system 32 based and obviously cool riders

Here’s a German pic of the kick harness pinout from NTM at the Neo Geo forums: Here’s another thread with some differences in the 95/96 versions: http://www.neo-geo.com/forums/showthread.php?264883-Dunk-Dream-95-vs-Hoops-96&highlight=Dunk+hoops

Cyberball by Atari can output to two screens as well apparently.

Anyway, Hoops two screen is seriously impressive. It's the kind of implementation I thought Dig Fight would have. Basically it's like two boards linked together. You can have standalone games on both screens at the same time or you can challenge the other players on the other screen. 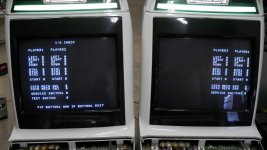 IO check on both monitors. 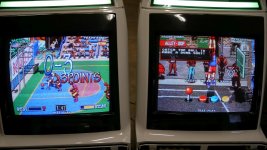 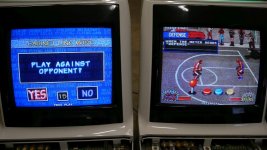 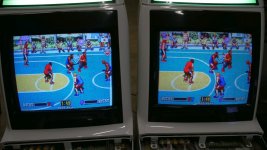 Left and right screen in the same 3-player game. 1P and 2P on left, 4P on right. 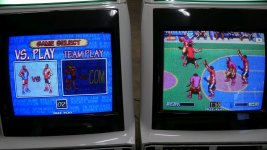 JoeAwesome said:
Here’s a German pic of the kick harness pinout from NTM at the Neo Geo forums:
Click to expand...

Son of a bitch.

Oh well, at least it was pretty quick to figure out.

Haha, no worries. I honestly thought I had looked everywhere for a pinout.

I know you have Rushing Heros on the list already but the flyer shows off the mode:
https://flyers.arcade-museum.com/?page=flyer&db=videodb&id=927&image=2

Some other games that support multiple screens but not in the way I think you intended:
X-Men 6-player
Darius
Darius II / Sagaia
Ninja Warriors
Tecmo Bowl


Also a kind of honorable mention is Tetris Plus on Jaleco Mega System 32. it only supports 1 screen but it splits it vertically and lets player 1 and player 2 play independent games in completely different game modes or challenge each other.


nem said:
Note that there is no simultaneous 4-player mode in Dig Fight! What a fucking disappointment. What it does give you is:

That is a huge disappointment, I've had one of these PCBs for a while and I'd been meaning to build a 4P harness to try out those modes. was looking forward to some interesting 4P battle game play :-/

Cleaned out the pinouts to make them more legible. If someone wants to figure out the missing things from Dig Fight (coin switches, etc), I'm happy to add them in.


twistedsymphony said:
That is a huge disappointment, I've had one of these PCBs for a while and I'd been meaning to build a 4P harness to try out those modes. was looking forward to some interesting 4P battle game play :-/
Click to expand...

No kidding. I thought it would be like Battle Lode Runner on the PC-Engine. Nope.

Even sillier is locking out versus behind the two screen mode. Why? The action takes place on the same goddamn screen: 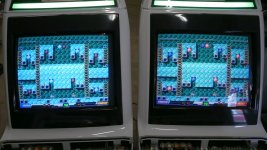 If you're interested in Listing the Psikyo Mahjong games that support 2-screens, they're:

it's worth noting that Mix Party is basically Hot Gimmick 1-4, so I think there's be a good chance the feature is available.

I believe the Video System's Taisen Mahjong series also supports 2-screens, they feature a similar link cable system to the Psikyo Mahjong games. though I'm not super familiar with the hardware or the specific games that have support.

the later games in the series after 4 are "Network Taisen" and the first game is just "Idol-Mahjong Final Romance" without the Taisen, so I believe it doesn't support multiple screens either.
Last edited: May 25, 2020

Searching around here are more games that support a unique second screen:

and these two:
-Backfire!
-Tokimeki Mahjong Paradise: Dear My Love

Also I'm not sure Touch and Go belongs on the list, it looks more like the game supports 2-monitors the way X-men 6P does, where it's just used to extend the screen horizontally.

The Hot Gimmick games I took off because they use a mahjong panel. Maybe there's merit to listing them all, just under different categories?

I think it's definitely worth separating them by control interface type.

EDIT: I just noticed you add the extended screen games.
you can add Warrior Blade - Rastan Saga Episode III to that list.


and games that have a secondary screen for some kind of alternate function:
Silent Scope
Silent Scope 2
Teraburst
Primeval Hunt

nem, how did you wire the Hoops harness? Do you know the AUX connector so I can make my own (or ask to be made

)?
You must log in or register to reply here.
Menu
Log in
Register
Install the app
Top