I have a Mini Cute cabinet that I use to play all of my arcade games. It's located in a poorly ventilated corner of my small and always too hot apartment. I live on the top floor (sixth) of an old NYC apartment with tall windows that face south meaning I get lots of sunlight keeping my apartment near 80° (27°C) even during the coldest winter nights.

When working on the monitor last summer, I noticed the chassis and neck board had some dark spots around some transistors—the result of high heat over many years. Knowing that heat, (and moisture) is the enemy of all electronics, I figured the cabinet could benefit from some cooling. I also reflowed the solder on the joints in the darker spots as preventive maintenance. My first attempt at keeping the components from getting very hot was to try some passive cooling. From working on Sony PVMs, I know that the transistors on the neck board that control the red, green, and blue guns usually have heatsinks. The neck board on the Mini Cute did not have heatsinks so I added some small copper ones I had laying around. These heatsinks alone brought the surface temperature of the transistors down by almost 10°C! Given the great results seen above, I decided I would try some active cooling and focus on the monitor chassis. 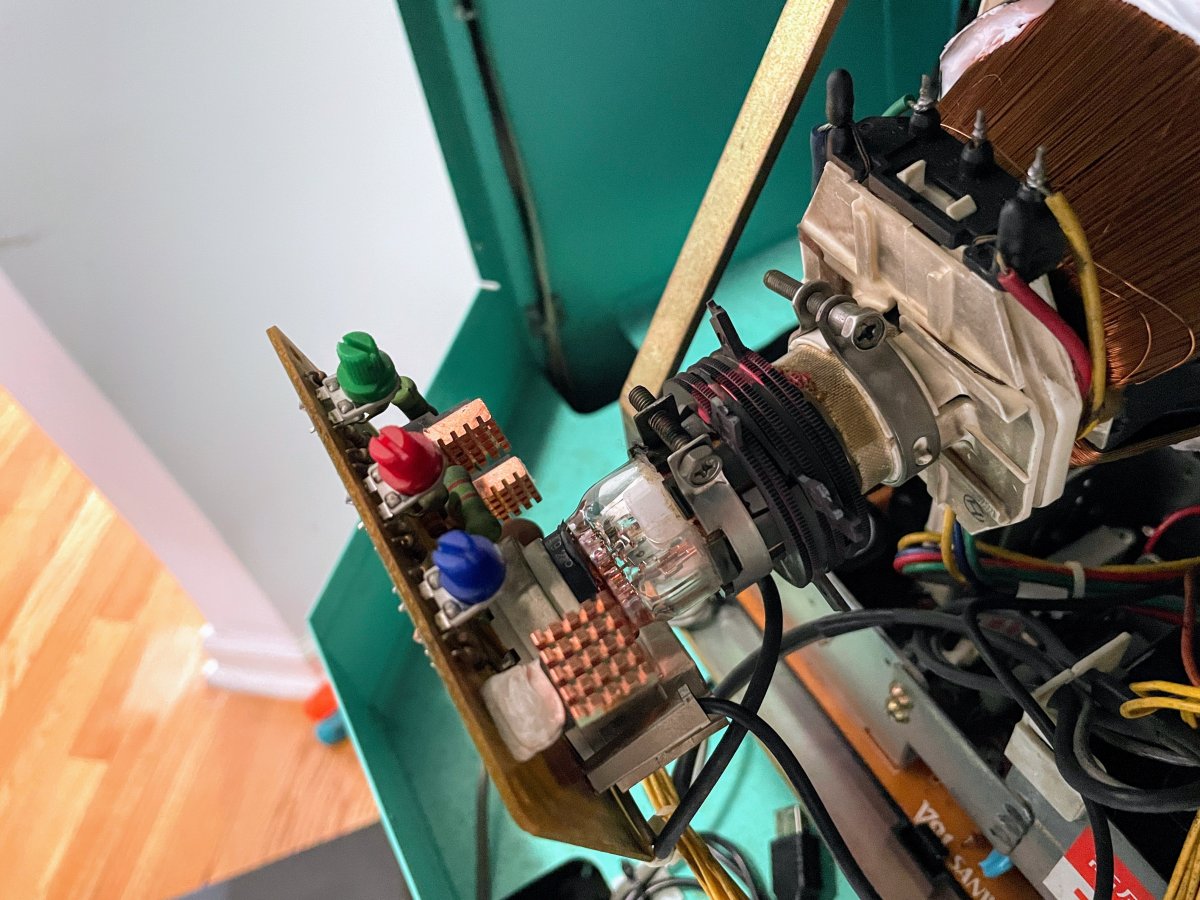 The interior of the Mini Cute cabinet is divided into two main sections; the top where the monitor is and the bottom where the power supply and arcade board are housed. The two sections are divided by a panel with vents and the top section with the monitor produces the most heat. I picked up some fans and positioned them above the vents so that cooler air is pulled from the lower section and blows onto the bottom of monitor frame, (with monitor in horizontal orientation) which acts as a heatsink. The fans do a great job of silently moving air throughout the cabinet but the effects aren't as dramatic as I would have expected. The components on the monitor chassis are about 10°C cooler but only when the monitor is in tate mode which allows the fans to blow directly onto the chassis. With the monitor in horizontal orientation, the components aren't much cooler, however, the transistors with heatsinks do see the biggest difference. I assume that can be attributed to the increased movement in air. My next, (and final?) step is to install fans as air extractors on the back of the cabinet. This combined with the first set of fans should finally result in dramatic cooling performance. My plan is to replace the rear panel of the cabinet since I'm hesitant to cut into the original metal panel. I found flush mounted fans from the same manufacturer as the fans I previously installed and mocked up where they would go. I wanted to check for clearance for when I rotate the monitor. My brother owns an auto body repair shop and has the tools and skills to fabricate and paint the rear panel for me. I'll be dropping off the original panel so that he can use as a template.

I'll update the thread when I have the panel fabricated and have some new data on temperature.
Last edited: Feb 2, 2021

With a repro mini cute on the way - definitely some food for thought. Thanks for sharing!

Fabrication of the reproduction panel is complete! The next step is primer and paint.

I chose to “delete” the center vent from the original design as keeping it could mean unwanted airflow direction. I want the extractor fans pulling air from the vents that sit below the monitor chassis so that air flows over the hottest parts. Leaving the center vent could have turned that vent into an intake which is not what I wanted. Nice job ! I really like the fact you went the extra mile of reproducing the whole panel rather than cutting original cab.

Yeah it was a simple enough panel that I felt it merited the fabrication rather than modifying original parts.

Reproduction panel has been painted! So this project is done. Installed the fans and everything is working well.

Took some time to manage all of the wires and add ferrite cores to prevent interference. I’m getting good airflow within the cab now. I took some temperature measurements on components I know get warm and the difference isn’t as much as expected but the fans do move lots of air. I was debating upgrading the fans to 12V in order to increase airflow but I think I’ll leave well enough alone for now mostly because I don’t want to add a ton of fan noise. These 80mm USB-powered fans are very quiet and I’m happy with how it all came out. 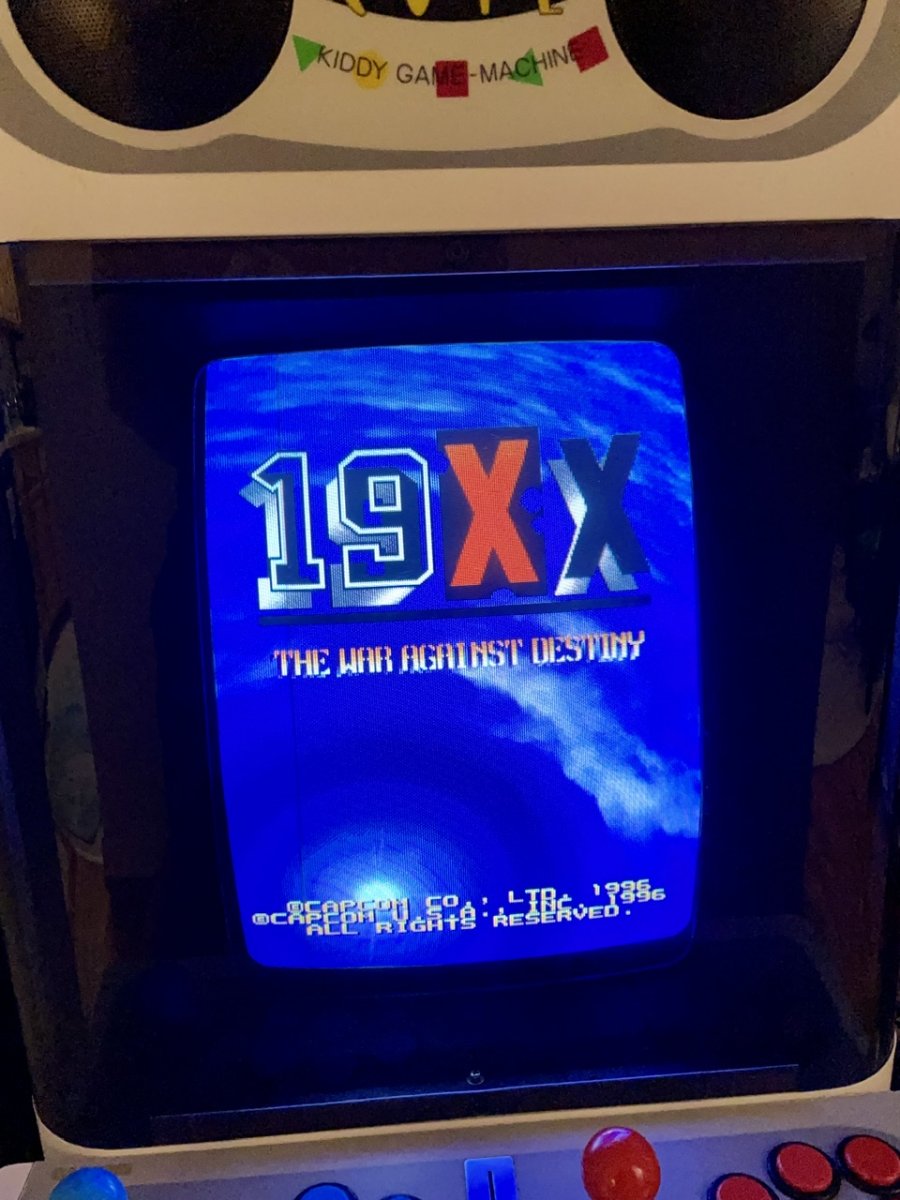 Is it left on all the time?

We have an original Space Invaders cab at work that hasn’t been turned off yet this year. I was thinking I should add a fan. Gets pretty warm inside there.

thegreathopper said:
Is it left on all the time?

We have an original Space Invaders cab at work that hasn’t been turned off yet this year. I was thinking I should add a fan. Gets pretty warm inside there.
Click to expand...

No, the cabinet does not remain on.

While it didn’t feel like a ton of work to get the fans in, it should be an easier project on a wooden cab. The fans are probably overkill but hopefully it will extend the life of the hottest components on the monitor chassis which are now 30 years old.
You must log in or register to reply here.
Menu
Log in
Register
Install the app
Top