Fantasy Zone 1 on System 16B

I probably have the apocalypse fixed version. I’ll take a look when I get back from traveling
D

Well, i need Fantasy Zone 1 romset, not the M2 version.

Fantzn2.zip Is Fantasy Zone 2 tears of opa-opa, but i am looking for a romset of Fantasy Zone 1 to put on a System 16B.

AFAIK the only Fantasy Zone 1 version for 16B is "Fantasy Zone Time Attack", fantzoneta.zip
This was also ripped from the Sega Ages collection, and does not require extra RAM like FZ2.

I can confirm it works on System 16B as I have a converted ROM board that I put-together myself.

As for the differences between the original System 16A version and the Time Attack version I can't say
Last edited: Jun 27, 2022

There is a regular "full game" version also rippable from the disc in addition to the time attack version. The disc "full game" version had a few minor graphics problems like the "Credits" font, and the sprite for the trails left by the final boss were not right on real hardware. These were the two bugs fixed by apocalypse.

The main program roms (A5, A7) are the only difference from the Time Attack romset.

Interesting, I take it that "full game" version is not in MAME?

Doesn't look like it's in mame. I think the thread that discusses Apocalypse's fix got nuked too when he went away.

I have a copy of the romset in my dropbox, I don't know if this is the fixed version, so if you want to try it out you can PM me. I can dump the roms from my board when I get some free time too if they're different. 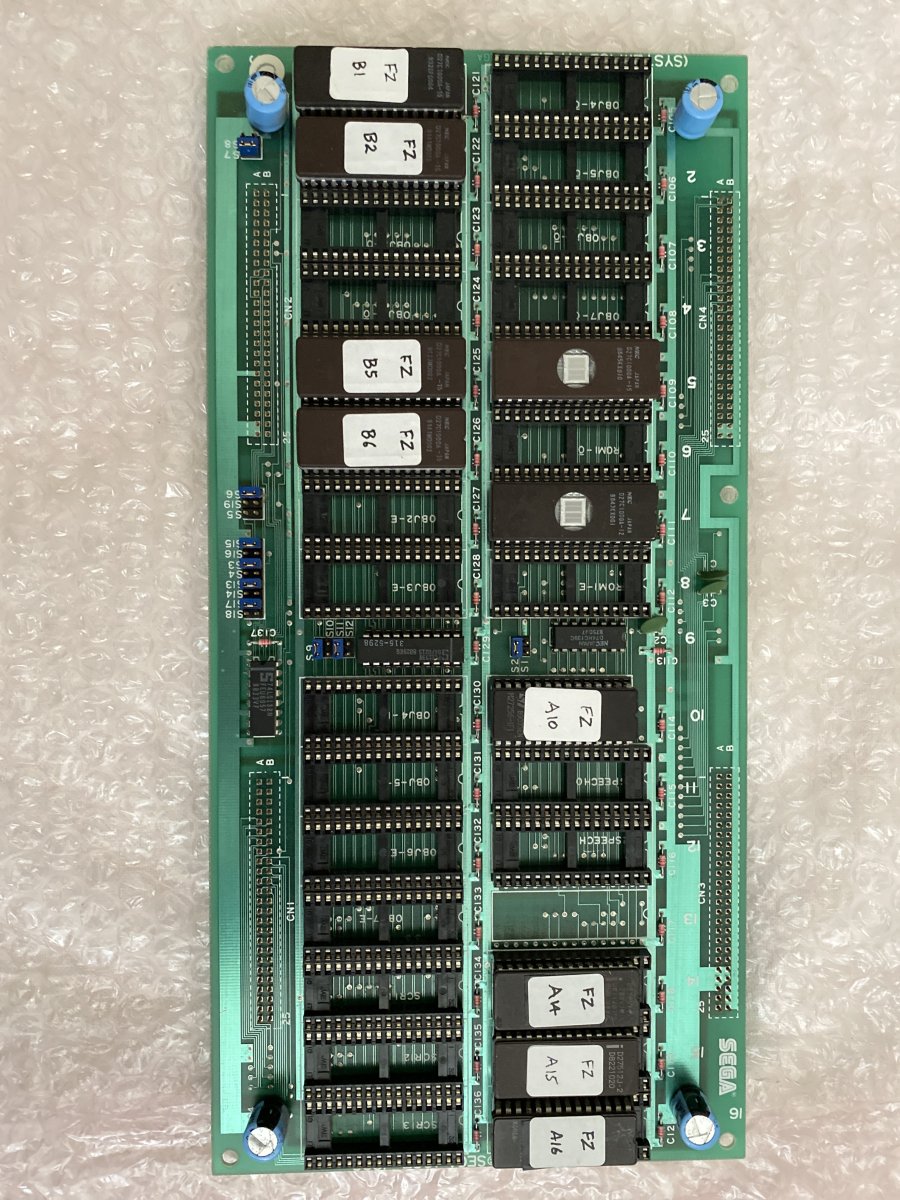 Via the wayback machine

Hakkyokuken said:
Via the wayback machine
Click to expand...

It's a shame the link to the patch (http://www.filedropper.com/fz1patch) is deader than dead.

Since I have a S16A, I wouldn't mind converting it to Alex Kidd and converting one of my S16Bs to Fantasy Zone if that's the regular version of the game. The information on the multi only lists to the "Time attack" variant, so it seems this game never made to it. Unless there are other multis around other than the ones powered by Darksoft multi romsets.

I was able to extract the program ROMs from the multi set and run Fantasy Zone Time Attack on the System 16B, but I didn't play well with the original SCR and OBJ ROMs from the original game. It behaves the very similar as when you convert a S16A to Fantasy Zone with the wrong IC69 PLD. Extracting the SCR and OBJ data is a major annoyance, because there seems to be some swapped address lines and as a result the data appears to come in 256 byte chunks, separated by 256 bytes of nothing. At that time I gave up and just used the System 16A. Sound worked fine with extracted Sound Program from the multi set. Test menu worked fine.

It's also too bad that Apocalypse didn't document the process as he did for some System C2 conversions on his blog, otherwise I could replicate it.

If anyone saved the link to that patch, it would be great to preserve it. I'll gladly make the IPS patches and release them as I'm doing with Moonwalker and Shadow dancer.

I think it's a shame this is not in the roll-up pack.

Back in the day when the PS2 version was released it contained 3 games of interest:

1. It worked poorly on real HW but Apocalypse fixed that.
2. The Time Attack version started popping up on YJ and I bought one and dumped it for MAME. It is known as: fantzoneta
3. We can't talk about this one

Please can someone make a new roll-up pack or share tools to generate one ?

rtw said:
3. We can't talk about this one
Click to expand...

Tell me more about this. I've been thinking of writing a guide on my blog about how to make the conversion based on my own experience figuring it out (similar to what I did with the System C to System C2 conversion).

@rtw and @TulioAdriano the OG version of Fantasy Zone is definitely on the S16B multi.
I'm surprised nobody else confirmed it.

@Blio Seri, I see. Yeah I don't own a multi... so I wouldn't know if that's the case. I was just going of what's listed in this post... which seems to have been outdated.

I may get a multi in the future but right now, since I have 21 System 16B boards

and many have repeated games, I do enjoy the process of making these conversions, digging up stuff, etc. I learn a lot in the process.
Last edited: Jul 1, 2022

Blio Seri said:
@rtw and @TulioAdriano the OG version of Fantasy Zone is definitely on the S16B multi.
I'm surprised nobody else confirmed it.
Click to expand...

Thanks for the info. Can you tell us the checksums of your files ?

rtw said:
Can you tell us the checksums of your files ?
Click to expand...

I bought my kit second hand and already programmed.
One sure thing is I got it early 2019 so FZ has been in the pack for at least 3 years and a half.

Blio Seri said:
I bought my kit second hand and already programmed.
One sure thing is I got it early 2019 so FZ has been in the pack for at least 3 years and a half.
Click to expand...

Which DIP setting is it on ?

Yesterday I was able to extract the files from my image of Fantasy Zone Complete Collection (Sega AGES 2500 volume 33) for PlayStation 2. It seems that the sprites are shared with Fantasy Zone Time Attack. In any case, since it's independence day holiday, I get a long weekend, so I'll use this time to experiment and try to run the game. Once I get it running, I'll release the IPS patches that will fix the bugs that happen with the original program. After that I'll attempt running it on 171-5358 ROM board so that it's more democratically available.

Then I can either make a guide or something... whatever you guys thing make more sense.

@TulioAdriano you saw that I posted the fixed files from Apocalypse for FZ ?
You must log in or register to reply here.
Menu
Log in
Register
Install the app
Top