Faulty TTX motherboard. Can we fix it - Yes we can!

Picked up a "Junk Treatment" TTX from YAJ for $20 (Plus shipping).

Video Card was completely dead, my test PC wouldn't post with it plugged in. PSU is OK, RAM & I/O card tests ok in my TTX+

Managed to get the PC to POST using the onboard video but not 100% of the time. So I popped the motherboard out and behold we have knackered caps... 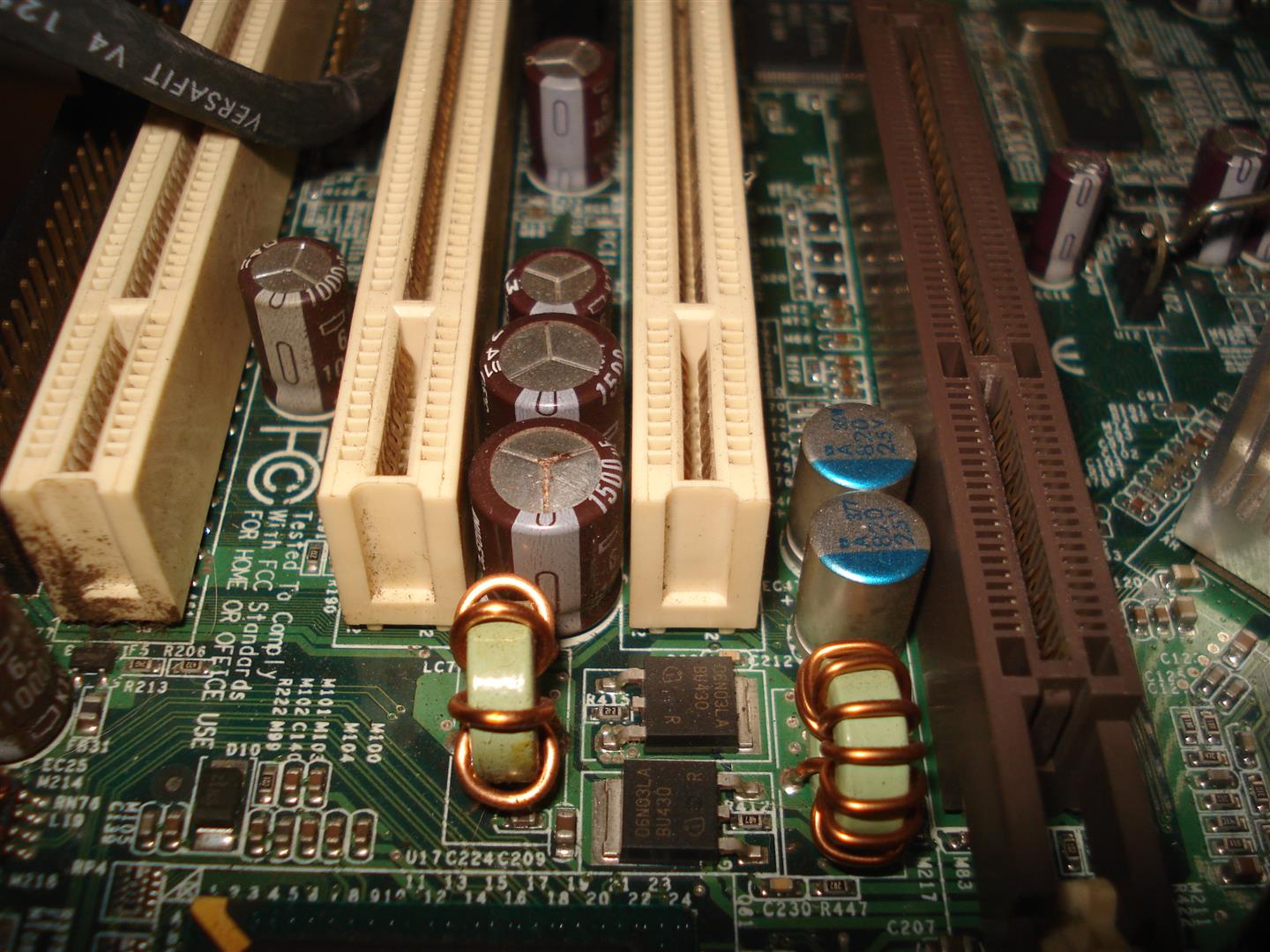 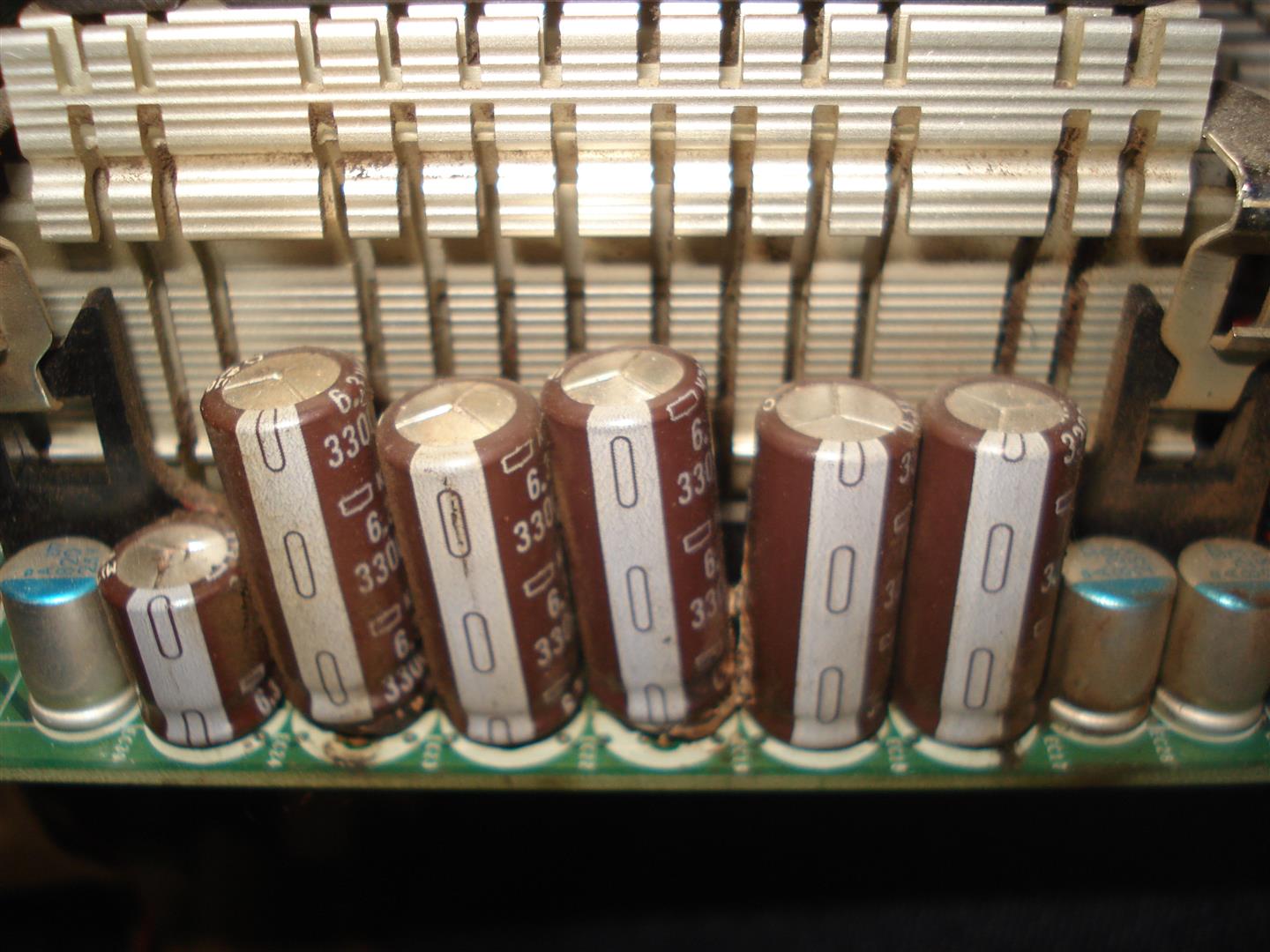 So what's the best way to go around this and is replacing them likely to fix the stability issue?

I was thinking of getting 105 degree caps, replacing all 6 by the CPU and the three between the PCI slots (all the other caps look ok - no bulging or signs of leakage).

I was going to chop the top off the caps, clean off any electrolyte and solder the new ones to the original legs (rather than risk damaging the PCB de-soldering them) or should I just fire up the 888d and solder sucker?

Take the time to do it the proper way to avoid further issues.

I know @Sp33dFr34k did the same a few weeks ago, but without success unfortunately...
His TTX is still dead after replacing all caps

They are pretty okay to replace, just need some heat to remove. You can use a 1mm (hand)drill if you can't clean out the holes with the solder sucker. Anyways, as Pascal mentioned, I did replace the exact same caps as the ones which are bulging in your pictures, didn't fix it unfortunately...
Last edited: May 24, 2018
O

Maybe your mobo was having another issue. His occasionally boots.

You need a high power iron to remove those capacitors. Problem is that they are connected to inner power and ground areas of the multilayer pcb. Those large cupper surfaces take away the heat you add to the capacitor to desolder it. Professional repair centers preheat such pcb's to some safe value so that desoldering works better.

The method I use is first applying some fresh additional solder to the pins. Normal leaded solder has a lower melting point than the (likely) unleaded solder they used during manufacturing the board. It also helps to remove oxodation that can prevent easy heat transfer between your iron and the solder. Next, I touch one pin of the capacitor with the iron and wait for the solder to melt. When it's melted, I push against the side of the capacitor so that it's pin moves slightly backwards as the capacitor becomes positionned at an angle. Next I repeat the procedure with the other pin, pushing the capacitor straight again and have that pin move backwards as well. After repeating this 5 - 10 times, the capacitor pins will separate from the board. Usually however, the holes are still filled with solder so you can't install the new capacitor. To clear the holes, I use desolder bread. Suction pumps never worked well for me. The trick is to use a fresh piece of the desoldering bread every attempt. (As the cupper wires are flexible. Once they contain solder, they become hard) You will see the desolder bread suck up the solder. The trick is to hold it long enough so that the hole becomes open. Sometimes, it will only have removed some of the solder. In such case, you can try again at the other side of the pcb. If it doesn't work with a couple of attempts, I totally fill the hole again with fresh solder (again to get the average melting point down) and I try again afterwards. Another method that can work to clear the holes is to blow the solder out with an air compressor. A problem with this method is that the solder particles splash around at the other side of the hole and can cause short circuits there. The airstream also cools down the mlted solderbath real quickly. If you have never done this kind of repair, practice on an old pc motherboard first.

I use the same method to remove the caps, indeed it takes away the heat rather well so you should turn the heat up a bit more than usual. I'm usually not that lucky with desolder braid with stuff like this, so I've used the 1mm drill bit trick with this one and works rather well.
O

The problem with a drill is that you might drill out the via. It's a small metal cylinder in the inner surface of the hole that connects the outer solder paths to the inner layers of the board). Sometimes, if your desoldering work doesn't work out as expected, it hangs around the pin of the component you remove. On dual layer boards, If you solder both top layer and bottom layer, it's not that much of a problem. On multi layer boards, you need to find a top layer soldering that is connected to the same inner layer so you can bridge those with a kynar wire. Those capacitors usually are connected in parallel so you can try the pins of one of the others.

That is correct, you have to make sure to drill in the middle, I think mine is 0.5mm and use it by hand, that way it should go fine although it takes time. Drifting a bit from the subject now so I'll leave you guys to it

@penrhos do you have one of these PCI diagnostics cards handy? Perhaps it can tell you something.

no diagnostics cards unfortunately. I might try my hot air rework station on the bottom but with them being so close to the CPU socket it might melt it.

I find if I add new solder, set my iron to 380 and use liquid flux I can usually get the holes cleared with a sucker on one side and the iron on the other - works well on pc engine duo's. 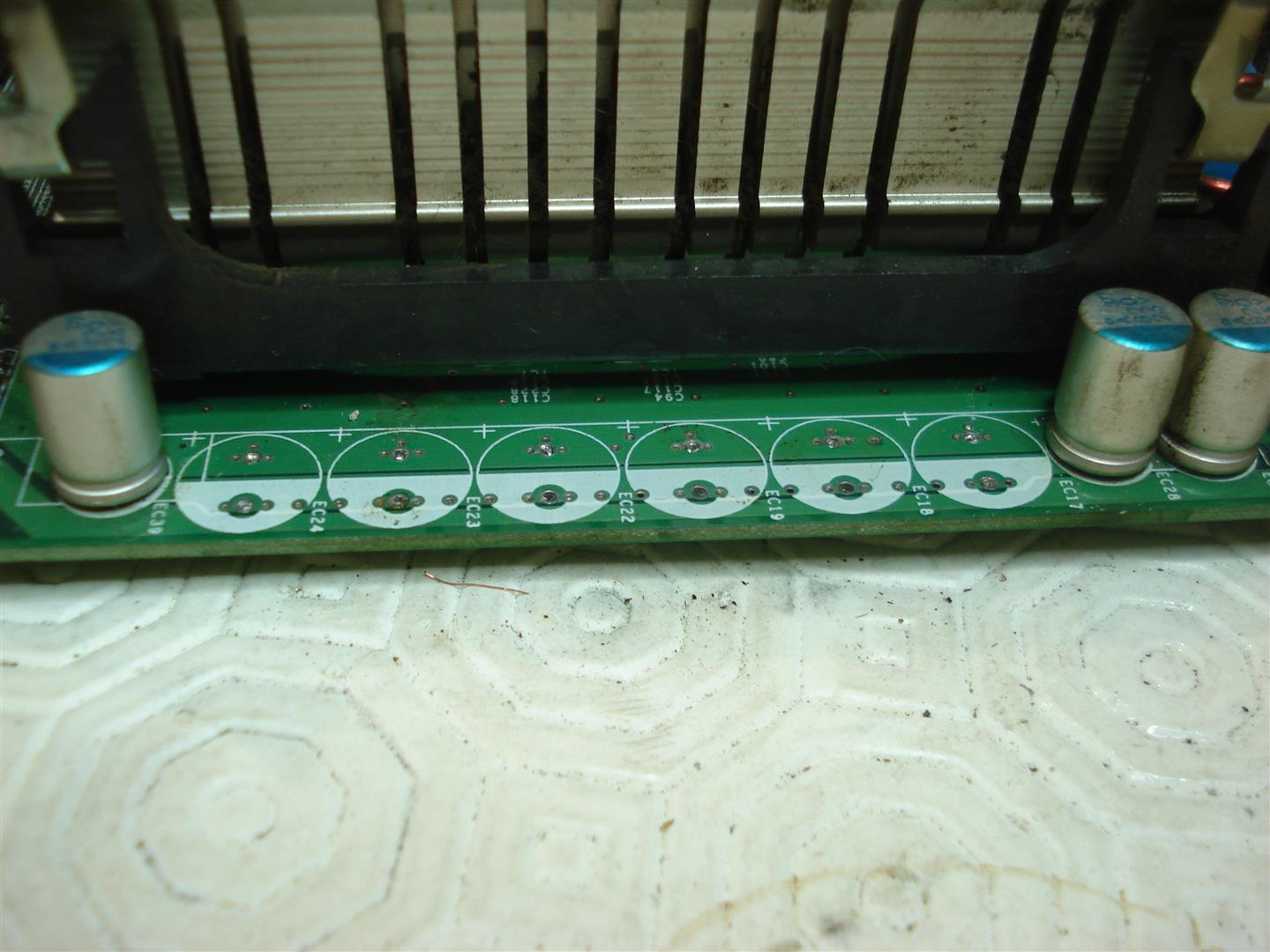 So far, so good - need to unblock about 50% of the holes but the caps came out easy enough and no signs of pulled VIA's or lifted pads (lots of electrolyte though, cleaned off with IPA).

Replacement Panasonic 105 degree low ESR caps have been ordered and might arrive Saturday.
Last edited: May 24, 2018

Caps arrived Saturday - but was at an Ed Sherran gig so didn't have time to fit them until today...

Soldering iron even on the highest setting was having none of it with clearing the holes so I resorted to the hot-air gun set at 400 on the back of the PCB and a solder sucker on the top. To refit the caps I warmed up the area with the hot-air gun and them soldered at 380. 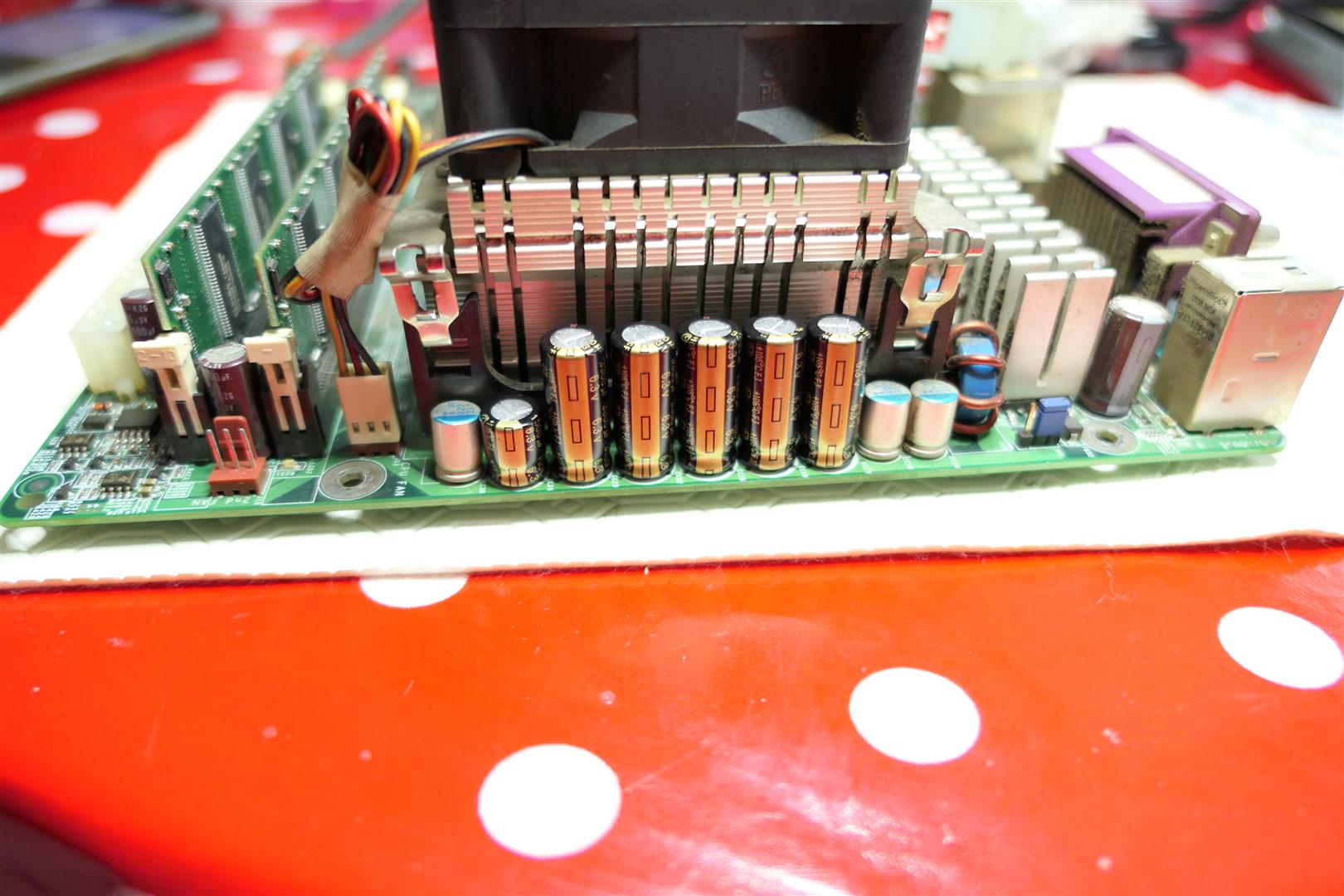 Not the neatest job on replacing the caps but with the amount of heat I was having to use I'm just happy not to have burnt any tracks. 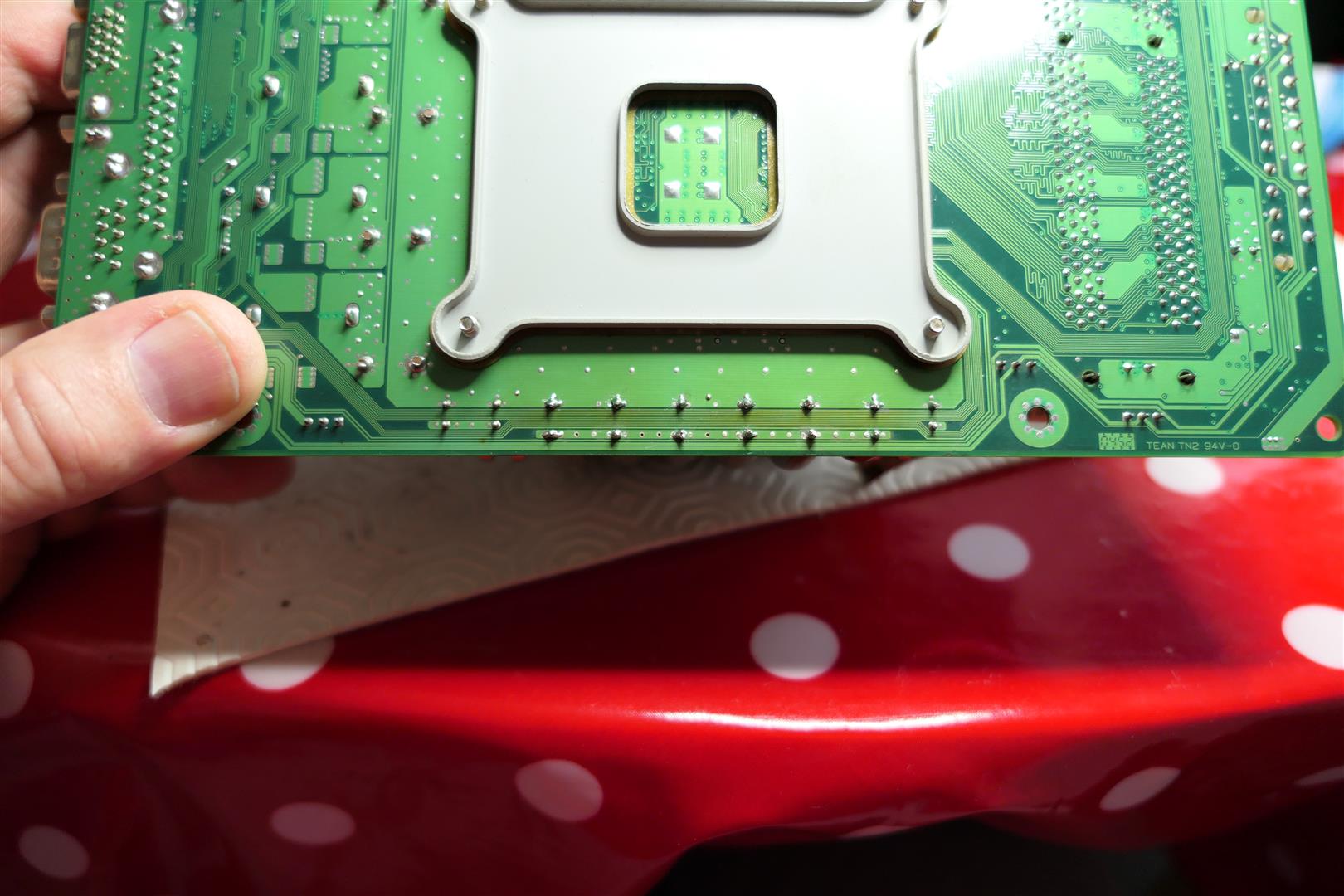 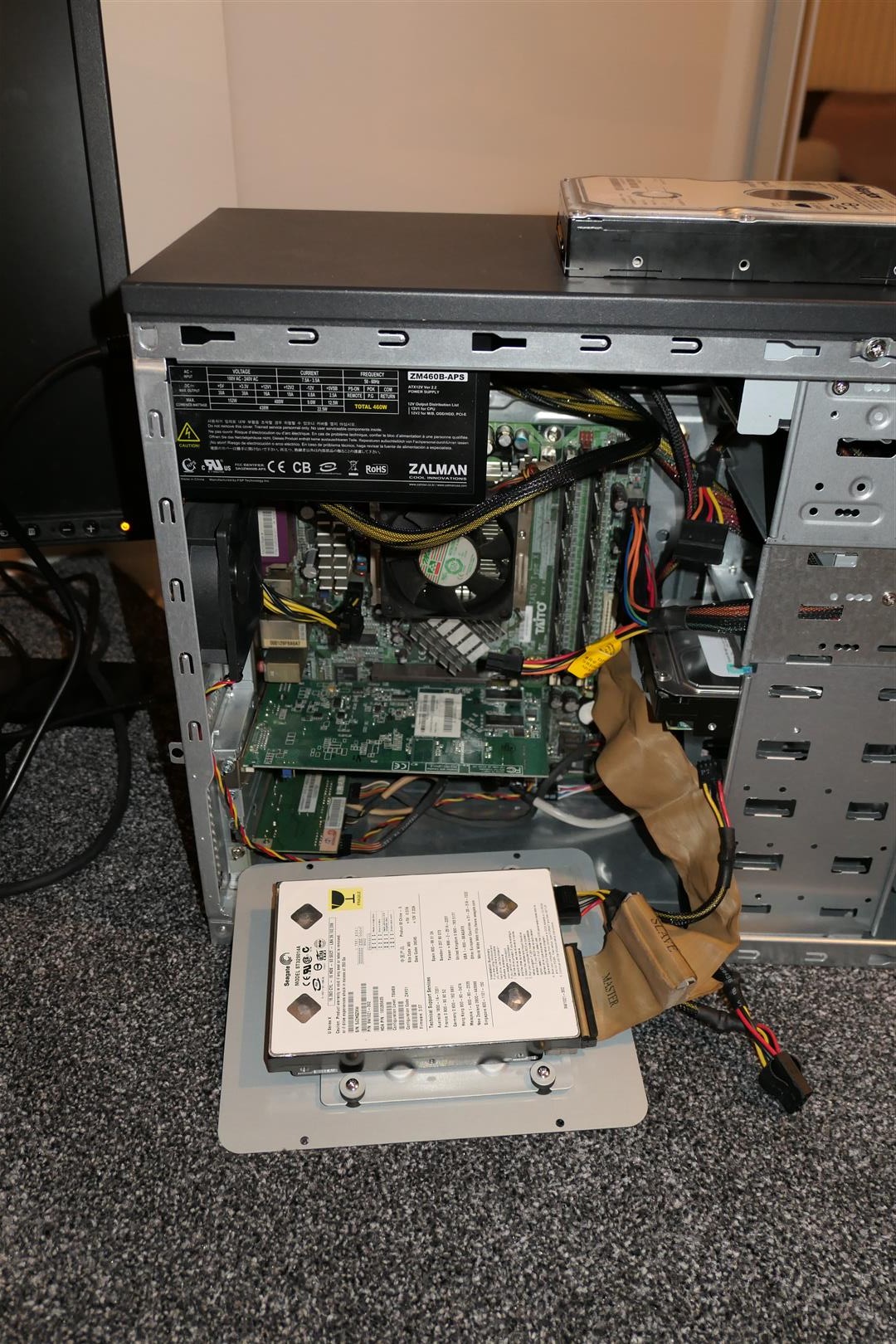 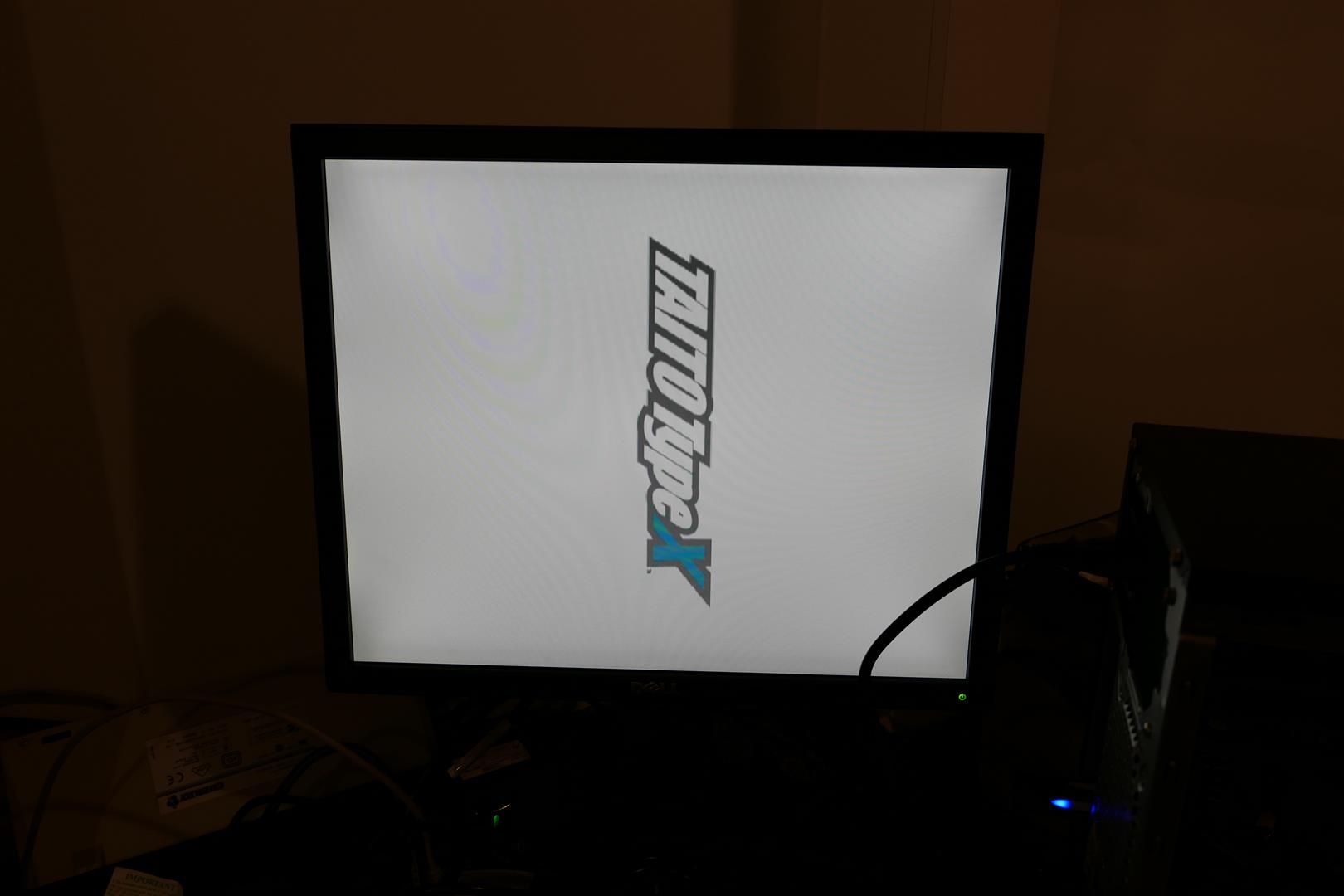 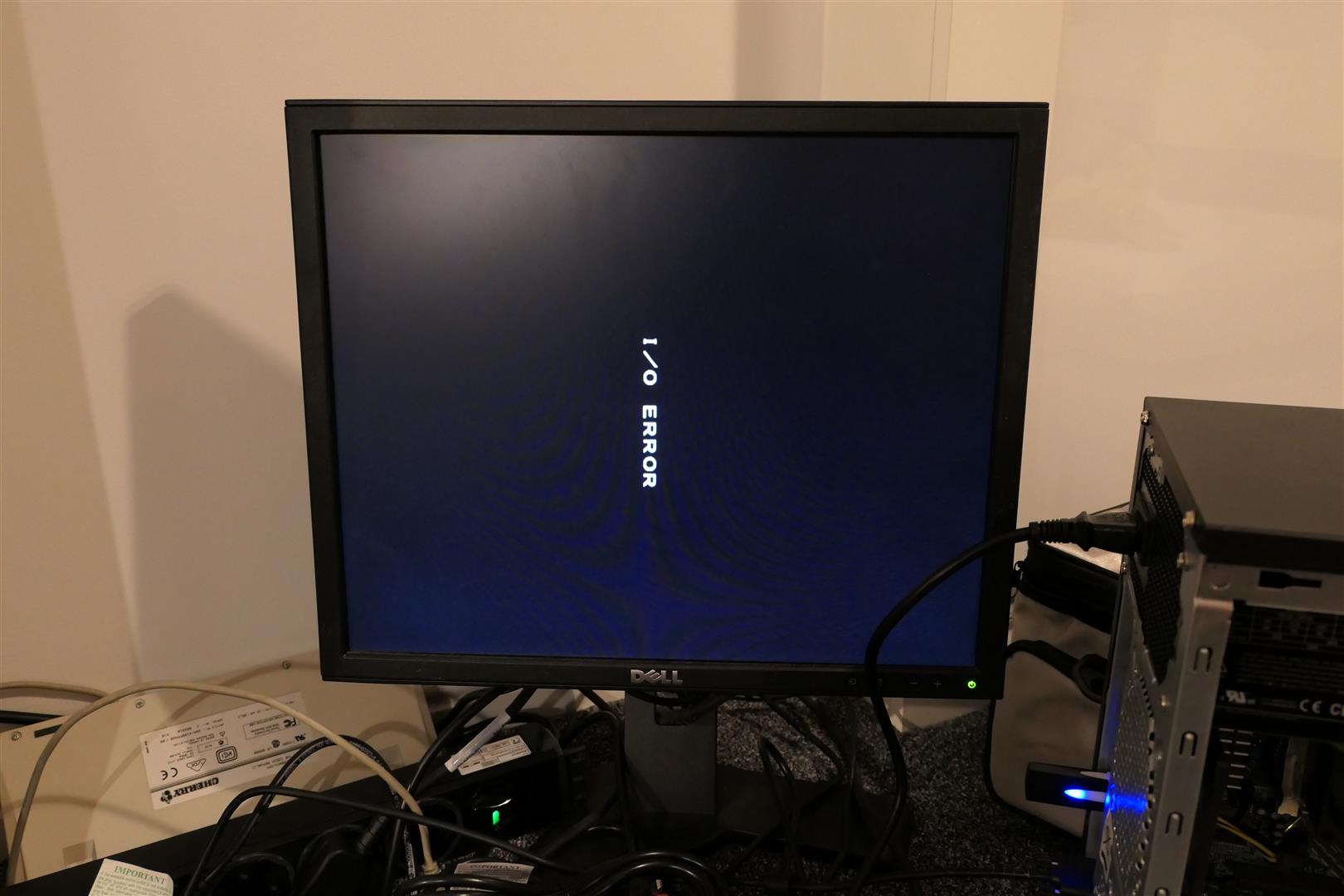 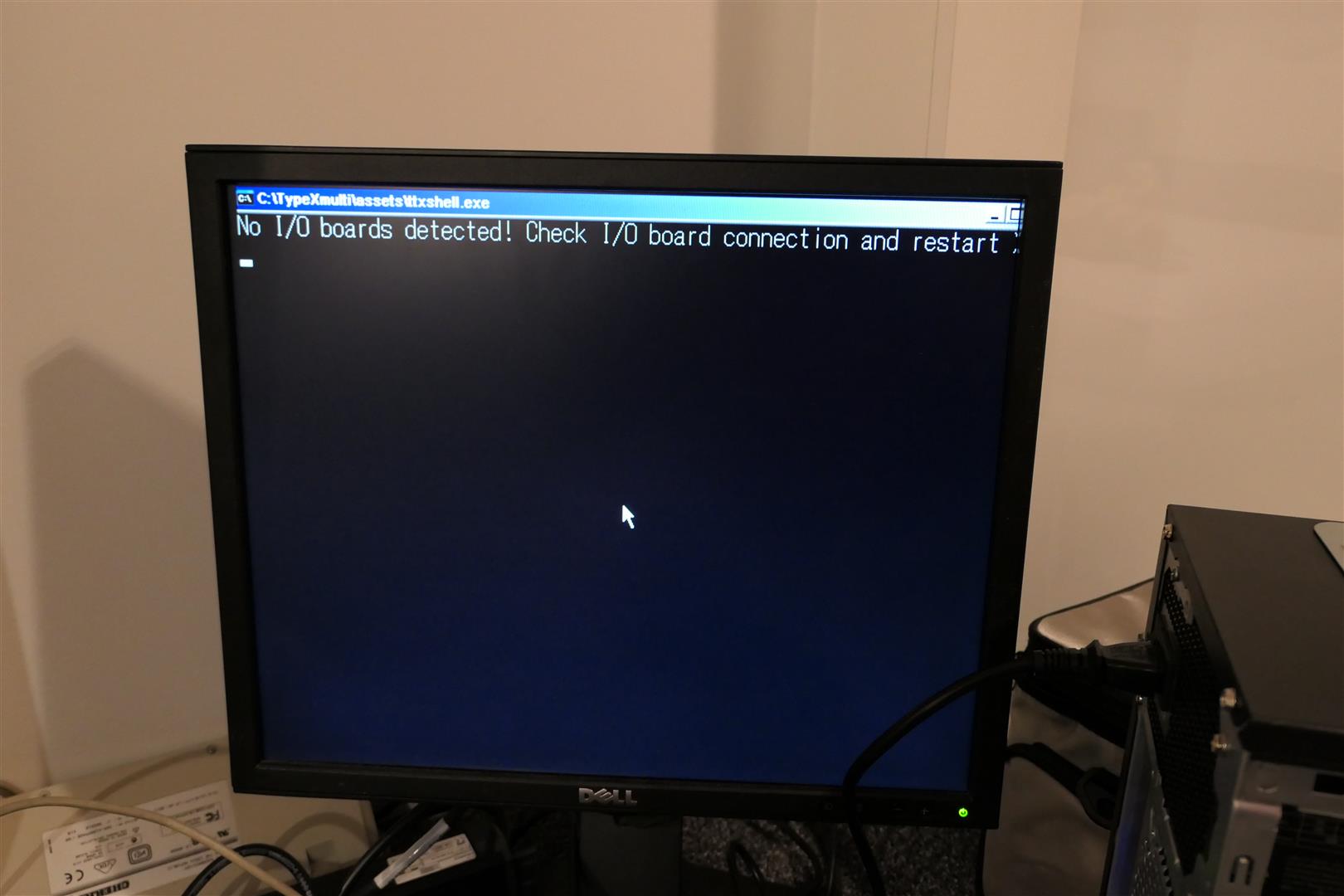 So it's looking like a success as I couldn't get it to boot anything reliably before replacing them - I'm not 100% convinced that the original PSU wasn't part of the problem too so it's going to be re-housed in a normal PC case.

The original TTX case is getting a 400W TFX PSU installed and is going to have the PC for the SR3 put inside it (as the PC case I have won't fit inside the base or the SR3 and the TTX & TTX2 cases do.

congrats on the fix

Your TTX internal psu prob has some bad caps too.

May want to open it up and take a look inside.

glad that you got it fixed!

I replaced the original PSU with one from a scrapped PC that was exactly the same size/spec but in much better condition and put it back into the original case.

Been using it for a few hours now - all seems OK.

For reference I bought one of these - nice and cheap!

Picked up another of these dead Type-X's - this one wouldn't post at all.

On close inspection the same set of caps were blown but this one was far worse, the four caps next to the voltage regulators were blown as were the ones by the memory slots and the two between the PCI slots, in total there were almost 20 faulty caps on the main board and all were the same manufacturer - Nichicon.

However I've got a new toy this time around. 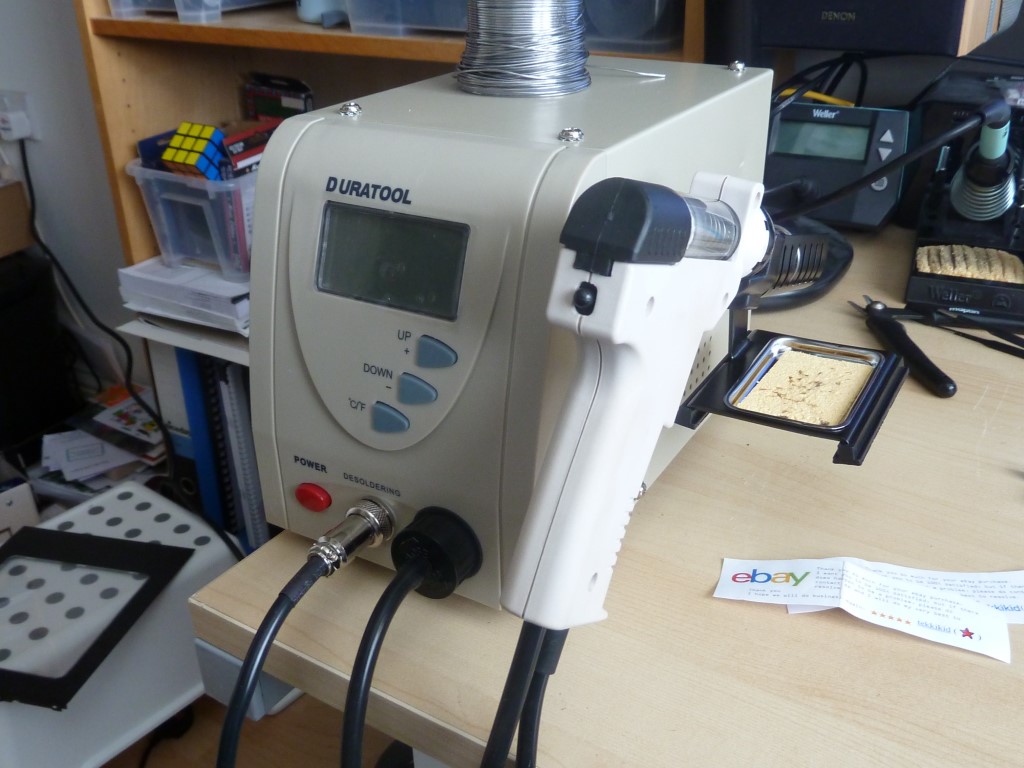 30 minutes later and I have a pile of crap caps on the desk and not a single burnt/blocked VIA - why didn't I buy one of these years ago, I'm never going back to using my SS-02 solder sucker for anything more than a small job. 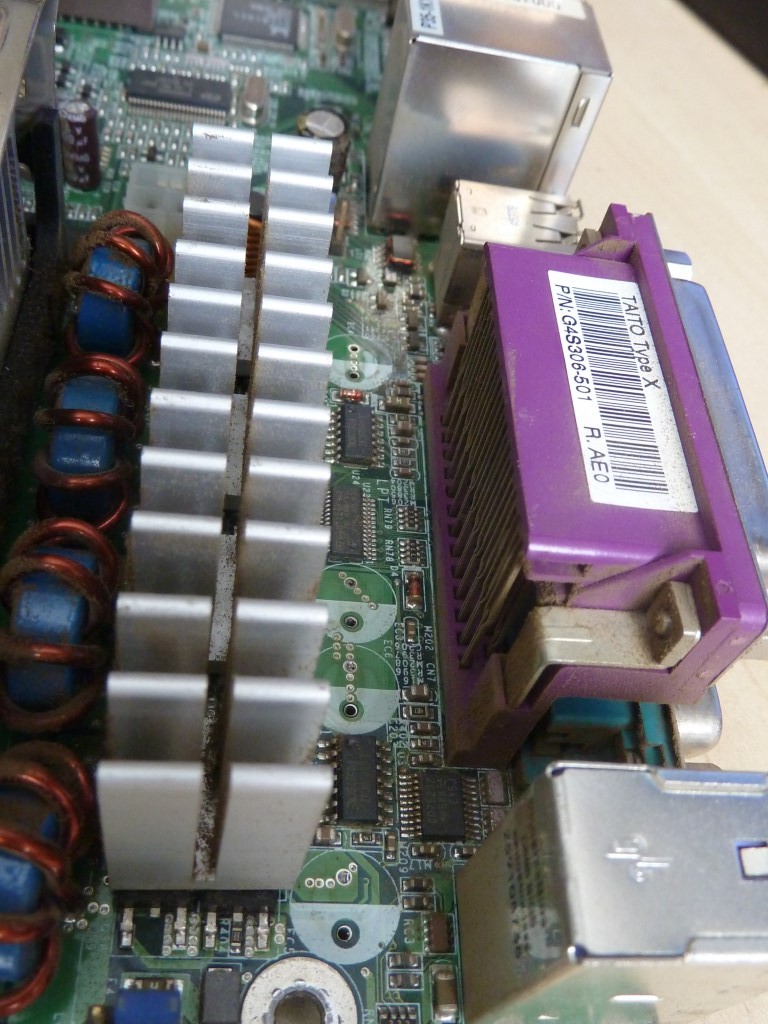 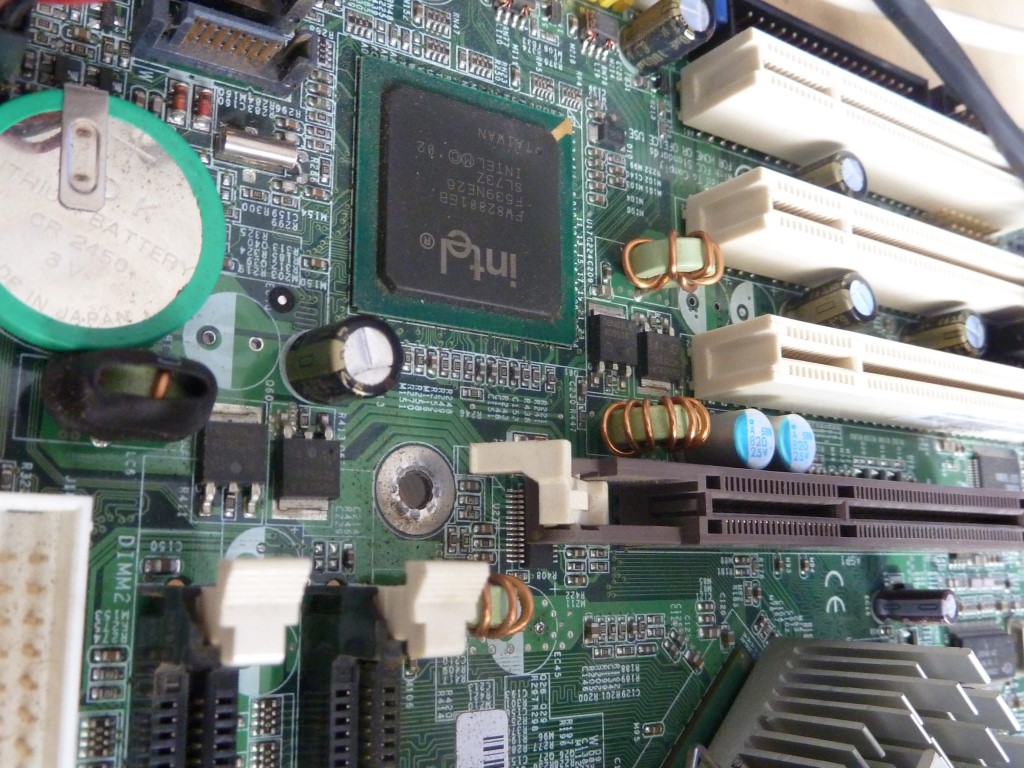 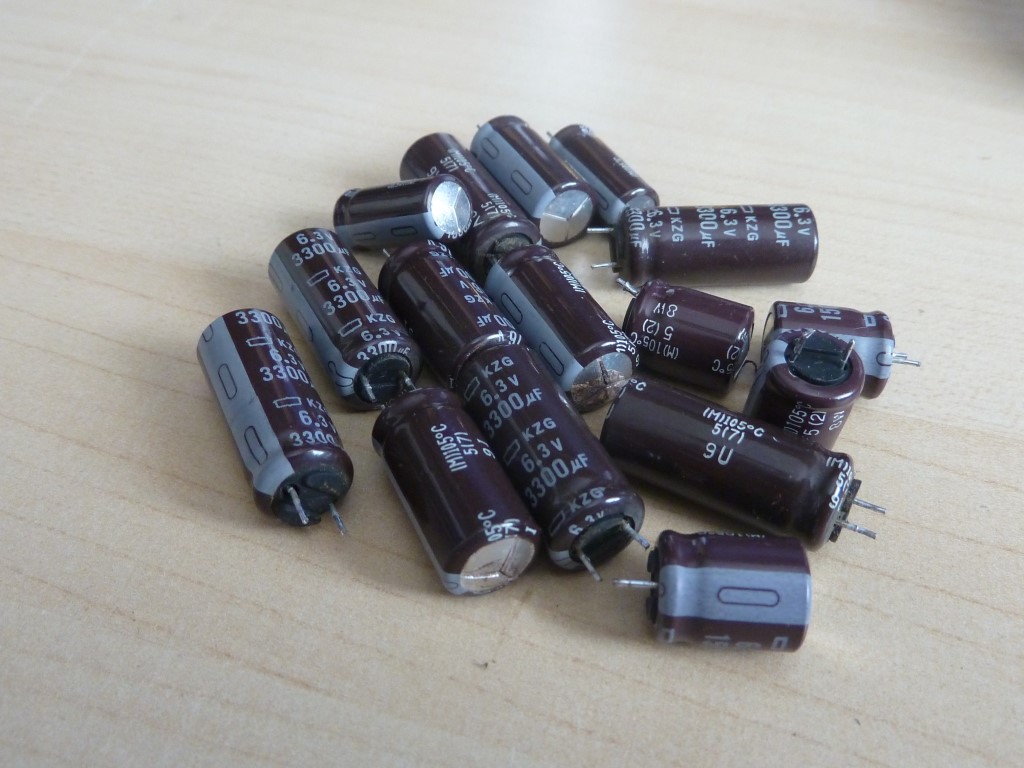 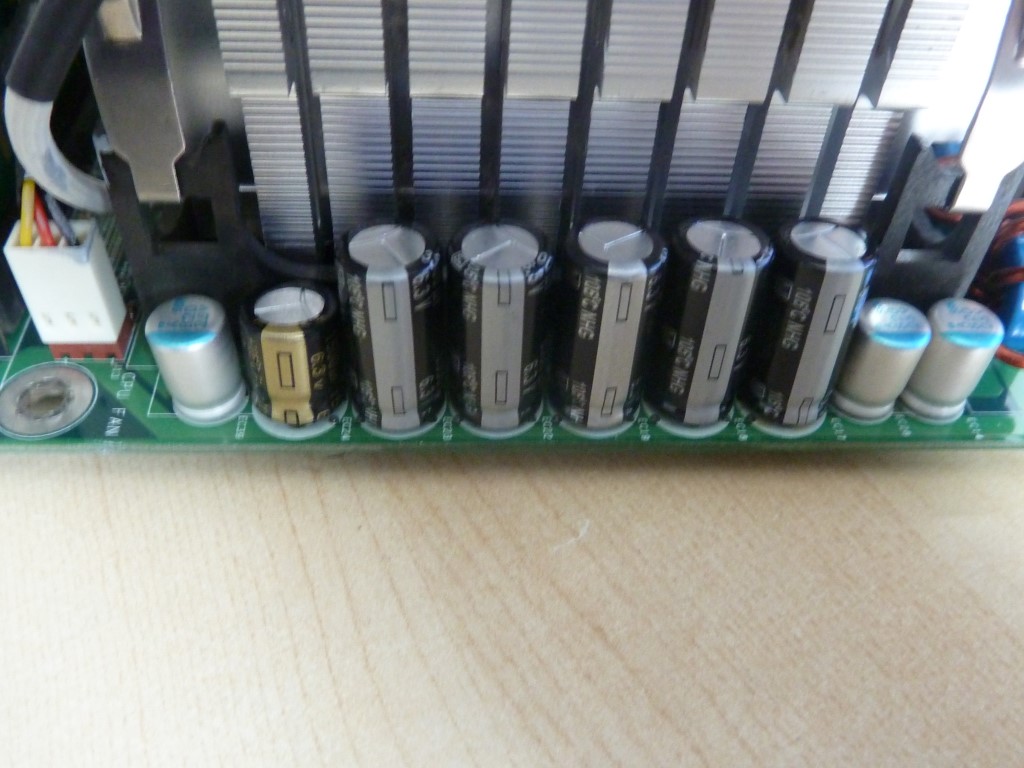 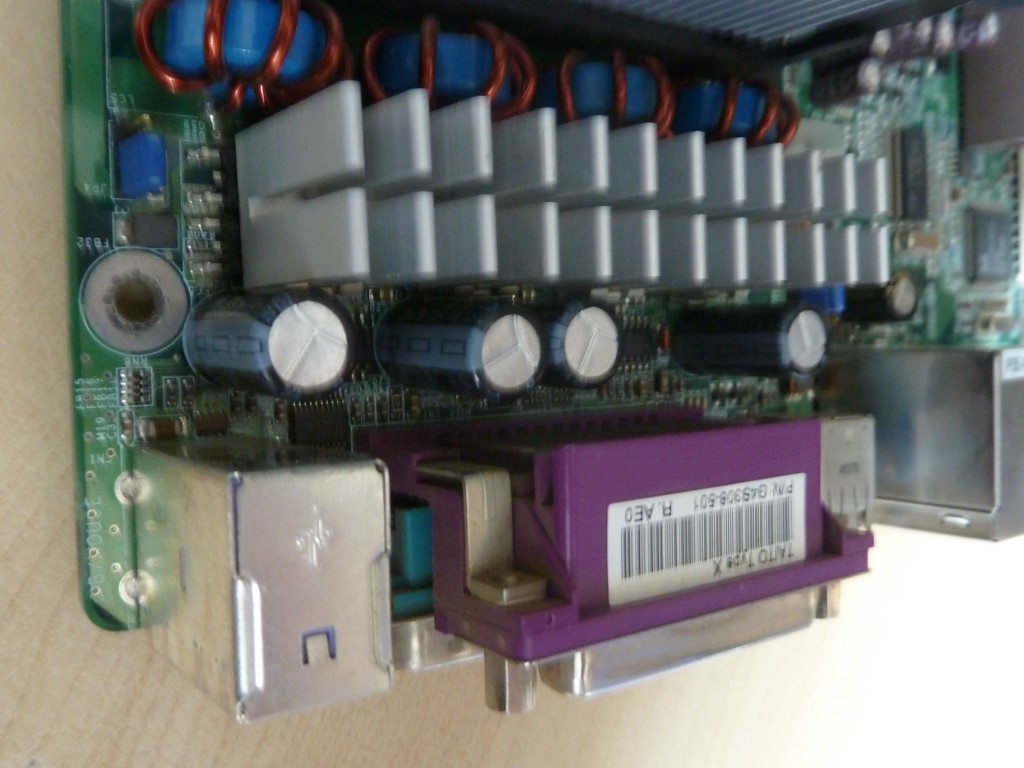 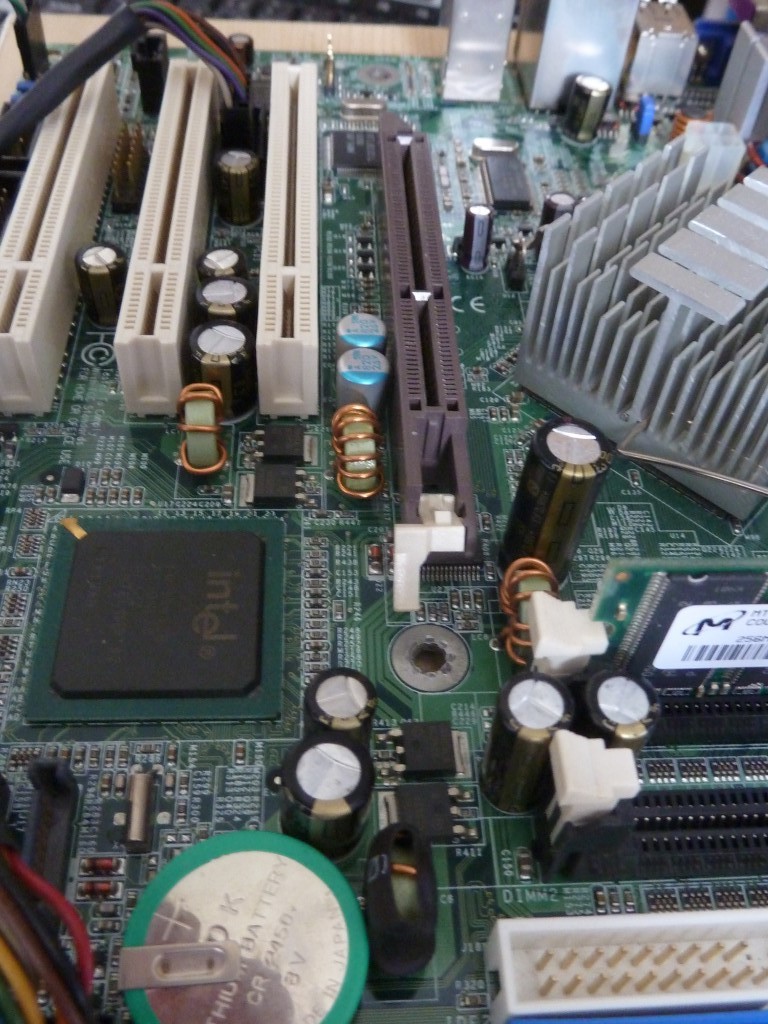 Soldering still isn't perfect on the caps by the CPU but no bridges, burns and good contacts everywhere, just not a neat as I'd like, the others were fine. 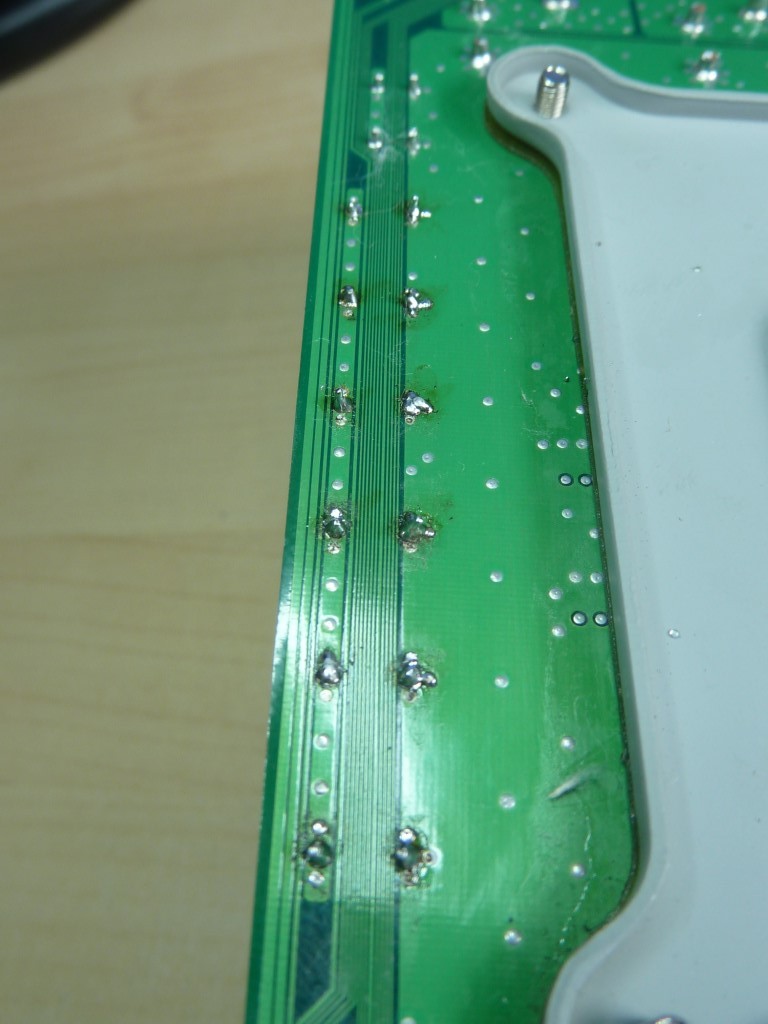 Power it up with a spare ATX PSU and.... 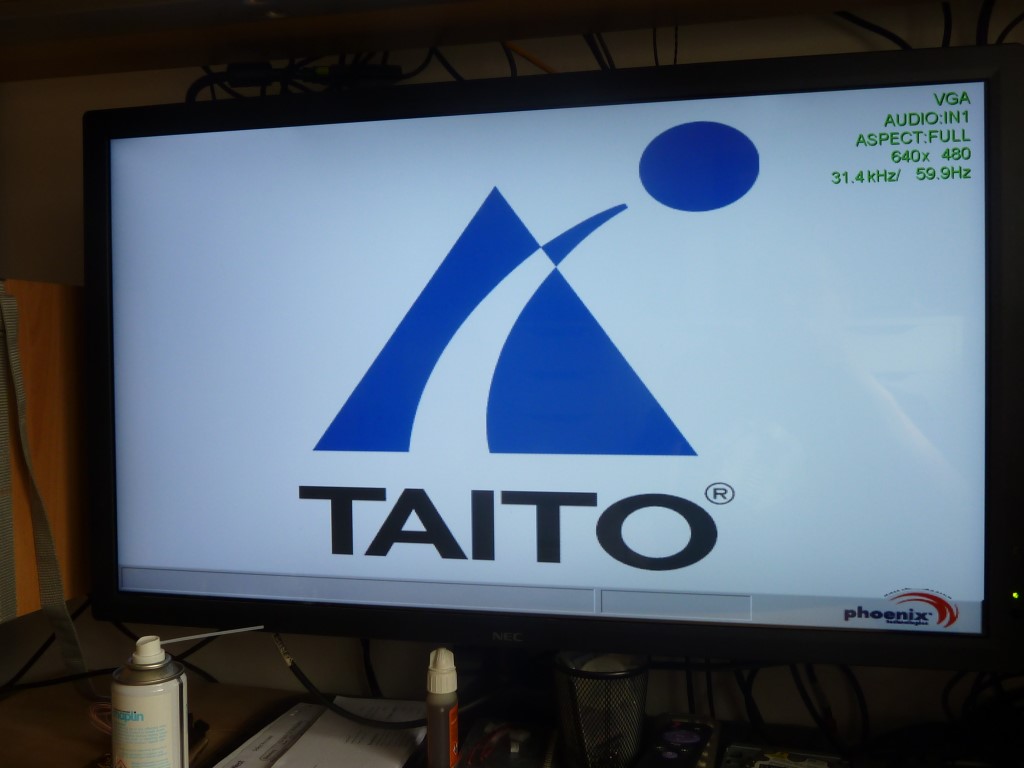 This is the PSU - for the cost of a replacement TFX PSU I'm not sure I can be bothered the strip it down and recap it. I'm assuming this is part of the reason the caps on the main board were dead - that and the PSU fan was spinning so slowly it wasn't drawing much air through it at all. 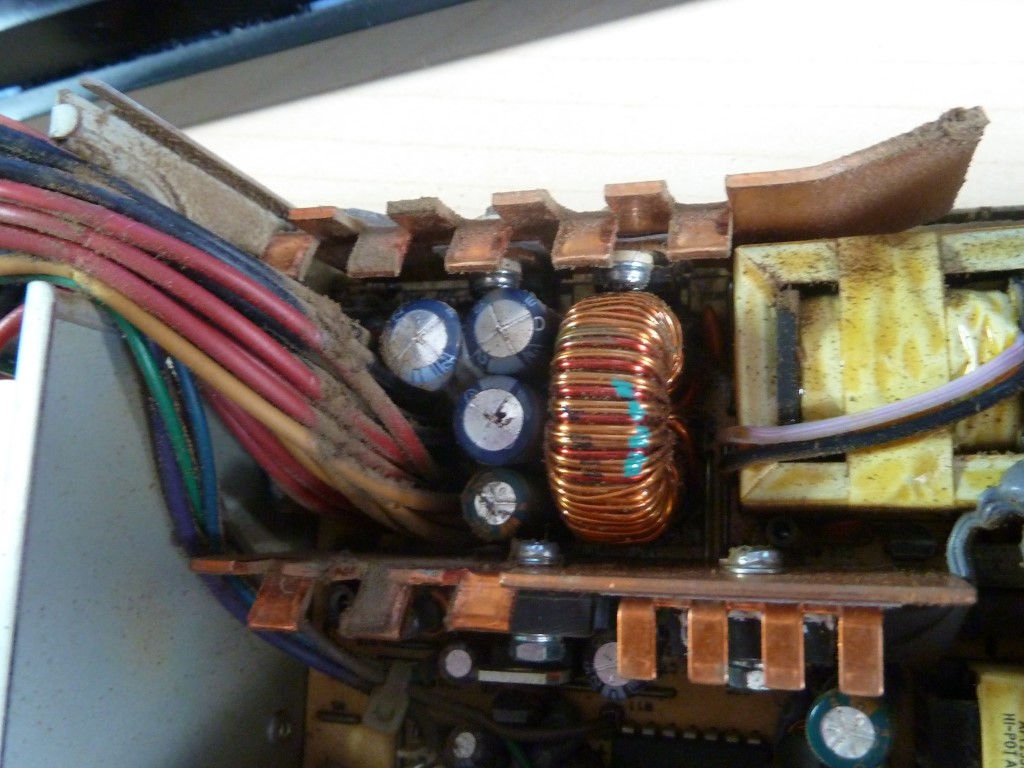 Lucky you, recapped one once, still dead.

Another awesome method for replace some kind of dip components is to cut legs and remove pins with tweezer and iron and then use the zd915 to suck remained solder from the holes . For capacitors replacements works directly with fresh solder and zd915 desoldering station

Yeah the 915 was the best £90 I've spent in a long time. I've already used it to remove the PPU from a NES to do an RGB mod and I've got a couple of other projects I'd been putting off due to the amount of desoldering required.

It'll be getting some use this weekend as I want to complete a few projects that have been lingering around for ages prior to me returning to work on the 8th (As our offices have re-opened after the covid-19 lock-down).
You must log in or register to reply here.
Menu
Log in
Register
Install the app
Top