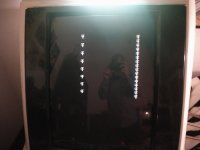 So I have acquired a lot of Neo Geo big reds and one was a 4 slot and this on just boots up to what looks like a bunch of corrupted " F " letters. (though I doubt they are the letter "F" since my cab is setup as vertical.)
I have never seen this before and was wondering if anyone had any pointers in the right direction???

Inspection:
-The battery was changed at some point (this has been removed by me now)
-one of the Ram chips was replaced with a Cypress ram chip with faster than equiv speed (aka this is compatible).
-about 8 or so traces looked very damaged around one of the PCB stand offs
-everything looks very clean
- one of the custom chips as a red permanent marker line on it (repair note from a previous tech??)
- This system was pulled already wired and installed in a cab with 4 games so I assume it was used and working at some point.
- no real signs of bad solder joints or board damage

Done so far:
- removed the battery on the board.
- reflowed solder to the replaced ram chip (this had no change to the output of the video)
- removed the ram chip from the board to check for damaged traces, saw no damage.
- ran the board with out the ram chip to see if there was any change in behaviour. (no changes without the replacement ram chip)
- replaced the ram chip and neatly and correctly re soldered it to the board.
- ran a continuity test for the majority of all traces around the damaged traces on the board all traces plus more in the area tested ok for continuity

Any ideas or hints to the right direction would be super fantastic.

Other Ideas:
Install Neo Universal Bios
Replace the ram chip with another known good ram chip i have in stock.
Reflow solder on the 3 large custom ASIC chips


Thanks so much guys and gals

first of all, of course you need a cart! Try with one installed.

Install a UNIBIOS and see if the UNIBIOS at least boots. Then you can see how bad damage is. If the CPU is working, if failure is on GFX chips, etc.

This should help. It's not perfect, but it's definitely a good tool to have.

That looks pretty much like connection problems between the LSPC chip (generates timing and memory addresses for the graphics subsystem) and the FIX ROM latches. As these same traces follow on to the cart slot it is very likely other graphics related functions (sprites) will also be affected/glitched.

These characters being displayed are pieces of a kanji font character (which uses four 8x8 tiles per each character).

Whoa geez i thought this got buried.

There are some updates on this board so far that i did not post.

I did put a universal bios in. You can run the board without a cart doing this and get a crosshatch no issue. The funny thing is the menus dont seem to be updating correctly. (IE: moving the cursor on the sound test, the cursor will not move). If you cycle through all the menus then the garbage on the screen goes away. But if you soft reset the system the garbage comes back.

First of all i tested voltages on all the rams and that was fine.
I removed the 2 rams by the LO rom tested traces and looked to see if any replacement ram which i had made any difference and it did not
I tested voltages on the LSPC chip and its getting standard voltages based on the pinout on NeoGeo Dev Wiki
I re-flowed the solder on the LSPC which did cause some change in the display output. 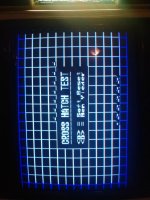 When i re-flowed solder around the LSPC-A0 some of the output did change.
It had been so long since I did soldering work on a pin pitch that small that one of the pins did get a tad bent. So i had to go full surgeon and correct the pin back straight as well as the pad which was damaged slightly when I accidentally bumped that pin DOH.

either way this is now the current output

@l_oliveira I did not know you were actually on this forum too but not sure why I would think you would not be haha. Thanks for the info Ill try reflowing the chip again but I am starting to worry maybe the ASIC its self is bad now or a trace under it.

I have the tools to remove it but I would prefer not too. I also have a working 1 slot with a matching LSPC-A0 so if it comes to it I might sacrifice that board.


Here is a video I made previously showing the behavior of the sprites/graphics not updating correctly and an overview of the board.
(please be mindful of my terrible free hand camera work, the first minute or so has me going through those menus)

Thanks so much for the outreach of help guys!!!!

According to the LSPC-A0 pinout on neo dev wiki is LD1/2 not sure what that is used for haha. The pad was floating but felt like it was still attached to the copper trace.

I had to be VERY VERY careful fixing that pin because lord knows I wanna try heating up and removing a 160 pin quad flat chip with my hot air rework station. haha

Nope its had the same issue.

I am actually working on a 2 slot right now as well there are vertical lines on the sprites. That would be something to do with the crom data lines or something on the way (ZMC2 or 257 chips) or maybe the LSPCA-2. I already traced out every single crom trace to the 257 chips and found no breaks as well as other traces.

Either way I got my handsful now haha

Vertical lines on the sprites, check the ZMC2 chip (C-ROM pixel data serializer). If it is in only one slot check the slot buffers.

So those are my culprits in question. Data lines go into the Neo-257s which is the multiplexer for the 2 slots and then gets sent to the ZMC2 then to the GPU.
If one of the outputs on the 257's is stuck or dead that could also possibly do it. I need to figure out how to use my buddies oscilloscope to check this stuff out though.

Any further suggestions on testing? The 2 slot should be an easier fix I am thinking unfortunately.

CORRECTION: it is on both slots and so that makes alot more sense so my ZMC2 may have issues.
Last edited: Jul 17, 2019

This is regarding the Bad Neo 2slot


Okay so I spent a ton of time trying to learn how these signals work and what they go to and i finally pieced it all together.

So i tested the output pins on the ZMC2 and all the C data inputs. All of them had the same clean looking waveforms except C17 which is pin 37 on the ZMC2 chip. This one has a very fuzzy and unstable signal.

Testing the input on the 257 (at location K2) for C17 which is pin 6 or 7 (depending the slot) I got a very clean and similar defined waveform.
But testing the output on Pin 9 for C17 from the 257 i get a dirty fuzzy signal.
I have concluded that the output from the 257 is bad on this pin as i tested directly from the pins not the pads.

Ill keep you guys posted if replacing that chip will solve the issue!!!
I feel like a wizard!

It's a lot better when you have pointers on where to look for problems, no?

l_oliveira said:
It's a lot better when you have pointers on where to look for problems, no?

YES!!! Thank you soooo much!

So I got my donor board and swapped the 257 slot matrix buffer chip and got clean signals on all outputs (fixed the dirty C17 signal) but the lines were still going through sprites.
Since the next chip down the line would be the ZMC2 and this is a common failure I replaced this as well.

After replacing the Neo-ZMC2 chip the board worked again.

Just watched your 4 slot video. I would suggest using smkdan's diag bios as @rewrite suggested as it will test all ram for errors. The symptoms point to
slow vram chips located at L9/K9 or LSPC. The diag bios will be able to test those ram chips for you.

I might have been miss seeing this in your video, but it almost looks like the voltmeter on your supergun was saying 5.46?

ack said:
I might have been miss seeing this in your video, but it almost looks like the voltmeter on your supergun was saying 5.46?
Click to expand...

Now we know why the ram is dead

ack said:
I might have been miss seeing this in your video, but it almost looks like the voltmeter on your supergun was saying 5.46?
Click to expand...

Now we know why the ram is dead

That video is a bit out dated now. But I did not change the 2 SMD rams @ L9 and K9 but i have spare working rams I can change tonight or tomorrow.
Originally I didnt think this could be related to ram but you guys know better than me. Basically this was moved to the back burner until I fixed the 2 slot which is now fixed !!


I only ran the board at a slightly higher voltage a couple times for testing but it made no real changes ( I heard the 4 slots might have needed a higher 5V but i actually realized thats only if you attach the cart slot board.)

On a plus note the donor 2 slot board I have has a LSPC-A0 GPU so now we got a spare that might work if it comes to it.

GeekMan1222 said:
I only ran the board at a slightly higher voltage a couple times for testing but it made no real changes ( I heard the 4 slots might have needed a higher 5V but i actually realized thats only if you attach the cart slot board.)
Click to expand...

You want the voltmeter to read 5.0V. The multi slots do draw more power which can cause the power supply to supply a lower voltage compared to other boards. Meaning if you have 5.0V dialed in on a different board then plug that into a multi slot the voltmeter may only read ~4.8V. You would need to adjust the power supply to get it up to 5.0V. You would also be careful going the other way, 5.0V on a multi slot may result in 5.10+ on a non-multi slot board.


GeekMan1222 said:
I would really love a DiagBios honestly really need an EPROM burner at this point in my life too haha
Click to expand...

If you wanna cover shipping ($

I will send you a diagbios.

Ill PM you for the bios for sure!

If you drop all the dip switches you make the SNK BIOS (and I suppose the UNIBIOS also) go into self test mode which forces the board to cycle ram testing indefinitely until it finds a fault condition. You could try that until you get the test bios set.
You must log in or register to reply here.
Menu
Log in
Register
Install the app
Top