Status
Not open for further replies.

No game included is pretty normal unless specifically mentioned, but all other questions are more than reasonable...

just one picture and a price is just BS, at least make a pic of cab left/right and mention if fully operational or not, etc...

I was always under the impression that because he typically gets a container full of 20-40 units, it's more reasonable and acceptable to just post a picture of the lot or one unit to give an idea, and then people could PM him for more details on a particular unit they want. He has a warehouse full of these as far as I know. Angled shots and descriptions of each would take a long time to post wouldn't it?

Ive never had an issue with KC sending me multiple images/video of any cab I was interested in, inside and out. I ask all the questions that I have and he answers. So I dont get what the issue is about? Im not making excuses for him in any way. You as a buyer are responsible for being knowledgeable about what you are buying, no one is forcing you to purchase anything. If you feel you were mislead in anyway, there is a feedback section for such things, no need to go blow up someone's sales posts. If you dont like the way the seller is listing his ads, dont bother to look/deal with them or maybe suggest that he post his ad a certain way, but again thats up to the admins to decide how that way is.
Last edited: Oct 29, 2019

True, if he has 40 in stock to sell posting a single picture is fine, pm for details.

Having just one, if he wants to move it faster he can post more detailed pictures if he wants. Anyone is free to ask followup questions if they want right? Maybe 8bit is really interested, maybe he is just helping other people out who might be interested. In all actuality I’m sure he is just working within the rules set to antagonize since KC has circumvented the rules by creating a new thread.

Buying from a collector we are assuming everything is good or otherwise disclosed which is why I prefer to buy from here.

If there was a tag for reseller items, that might be helpful as this is basically buying from ebay, only what is shown is guaranteed, hence the comment about the game included. Rules set for this forum are clearly not written for pure resellers.

Of course I have heard it is the buyer responsibility to do competent self research. Some people just don’t know or like to ask questions, oh well.

In a literal sense, it's "tested"; like, "this has been turned on, ever". It definitely doesn't mean it's been thoroughly checked out, and there are no details provided. I've had my handful of cabinets delivered from KC, with good and bad. I know what to expect, and I'm not defending his practices. The point here is that nobody in the world expects that it comes with the test board, and virtually every seller does it.

I have held up a blacklight to a monitor, and pointed out some minor burn; he didn't miss a beat, and insisted "no burn, no burn" while I'm pointing at the burn. I got a Blast with an absolutely fucked monitor and a cracked body, and pointed at them, being told we'll "deal with it later" (it was not resolved).

This goes both ways, though. I got a cheap Astro because "the monitor doesn't turn on", and then on the way I got a call, where he told me "actually, the cabinet has no power supply. maybe the monitor works". Inside that cab, I found the power supply... tucked away in the corner, unplugged. I plugged it in and it worked, so ???

Things like a structurally compromised cabinet, or an unfixably damaged tube are over the line for me, but things like a joystick being broken, or a button being stuck, or a wiring harness having a snapped off ground, or a CCFL lamp not being out are fair game for me. From an importer, I don't think anybody should purchase anything and expect a 100% good-to-go cabinet that's been gone over twice with a fine comb. If you aren't prepared to work with these kind of things, either pay a lot more and buy from a private owner who has worked on the machine thoroughly, or choose another hobby.

However, I do not think any of these things validate his janky business practices.

The (relatively low) expectations I laid out above are ones that I developed through second hand accounts, and later my own experiences. It would be preferable, and less janky, if these kinds of expectations were laid out by K C himself, as a policy. It's totally okay to sell cabs cheaper, with a lot less guarantees attached to them, but it should be laid out clearly from the start, and not used as a rationale for a cheap price or as a weapon in the game of buyer's remorse.
Last edited: Oct 29, 2019

@kcarcadegame any Taito Canary this shipment? 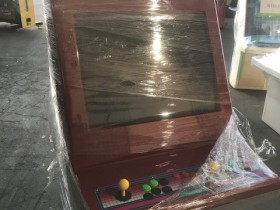 That's 2 sightings in one week.

Status
Not open for further replies.