I recently acquired a non-working Konami Rock ‘n Rage board and this will be where I report my progress with trying to bring it back to life.

So the main observable problem with the board is heavy corrosion. And so far, I have been cleaning and restoring the damaged areas the best that I can.

Here are some before and after pictures: 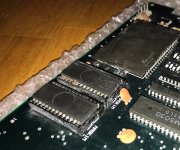 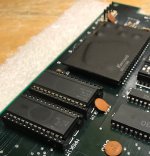 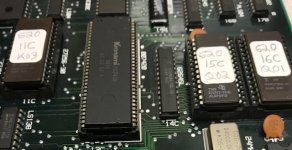 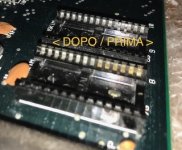 After cleaning all of the sockets, I still need to test them for continuity on every pin. Visually, they look good now, but of course they must be tested. I don’t want to replace them, to keep everything as original as possible, but if I have to then I will.

Most of the EPROMs and mask roms are corroded, and some may not be salvageable, but for now, I have burned all new EPROMs, but I will need help with the mask roms because they are Konami 1meg mask roms, so the pin out is smaller then eprom standard. I will need to build or buy an adapter for them.

I will post an update here later tonight with some of the questions that I have. In the meantime, here is what the board currently does when powered up. 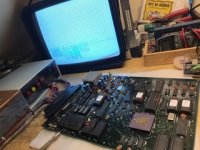 An update on my slow progress with this. (I have been busy with other projects)

So I burned four 32-pin 27c010 EPROMs and modified them for use in the four 28-pin MASK rom sockets. But despite cleaning and reconditioning them, I still don’t trust the original sockets on the board. I may reluctantly have to replace them.

I also replaced the two big socketed Konami chips; the large rectangular 007420 chip and the large square 007342 chip, both sourced from a parts board.

Then I also desoldered the large Konami 007327 custom chip, installed sockets on the board, and replaced it with one I sourced from the same parts board. 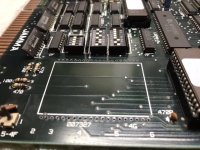 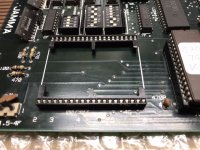 Still have garbage on screen. 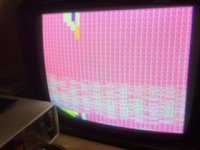 I just wish someone could tell me if this looks like a possible “rom” problem? As I’m trying to figure out if it’s worth the hassle of replacing some or all of the eprom sockets?

Also if anyone here could tell me which other IC’s may be suspect to check and replace?
Last edited: Jun 18, 2020
A

It's never a good idea to replace chips randomly.

You must troubleshoot first then replace identified faulty chips.

From my experience non-booting boards are often a reset or work RAMs issue.

I greatly appreciate your input and advice. And I have been documenting my readings and results from the logic probe tests I’ve made on the 6809E and 63C09 CPU chips. I’m giving this board another chance here to see if you (or anyone else here) who may be very familiar with the layout, logic, and order from similar Konami boards of this time period may recognize the problem it has and how to correct it.

In addition to the components that I repaired and/or replaced in the earlier posts above this one, I have since then removed, socketed, and replaced the other 4 game roms (whereby all 8 game roms are now replaced) as well as the 6264-70 ram, the 6264SL ram, and the 2128. I also replaced the 24MHZ clock.

I still have a random screen of garbage pixels and corrupted tiles on power up. Sometimes they stay static, other times they begin scrolling and moving. 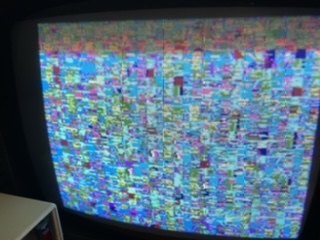 My main focus now are the 2 CPU’s I mentioned earlier. I have already found 1 of the 2 for future replacement. (although piggybacking caused no change) As well as the 3 small 6301 chips. Not sure what they do, but they seem like they might function similar to ram chips. And also the mystery chip at position 9A. No idea what it is because Konami purposely scratched off the numbers on it. 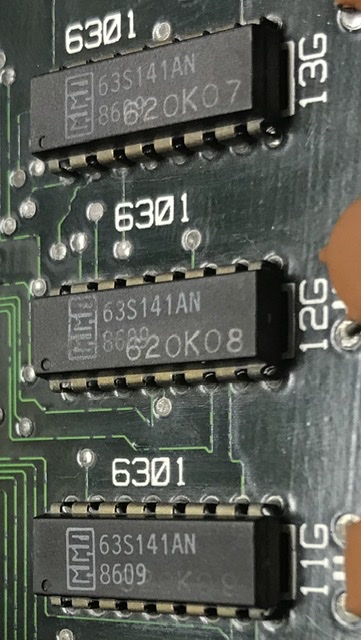 Beyond this, the remaining suspects would be the various TTL chips (and some of them are Fujitsu) that are in the surrounding areas of the aforementioned CPU, Ram, and Rom chips. 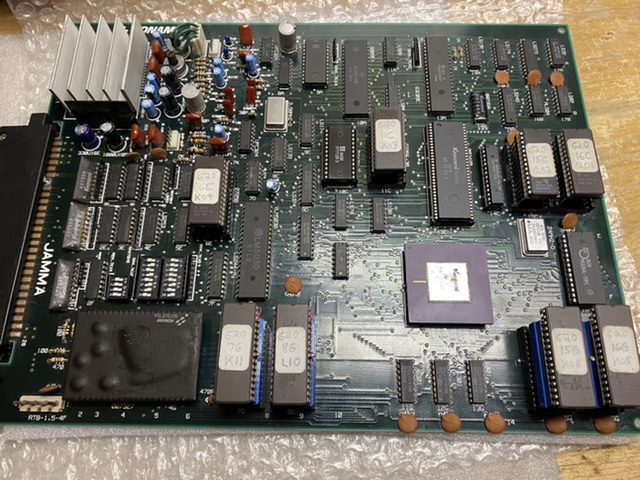 I will post some of my logic probe readings here:

On power up, pin 37 of the 6809E CPU which is the RESET begins low and then goes high and stays high. From what I read, it is supposed to do that and it means that the board is not watchdogging (stuck in reset cycle)

So, it seems, for now, as though replacing the 6809E CPU may be over reach and not needed, because it is behaving correctly. 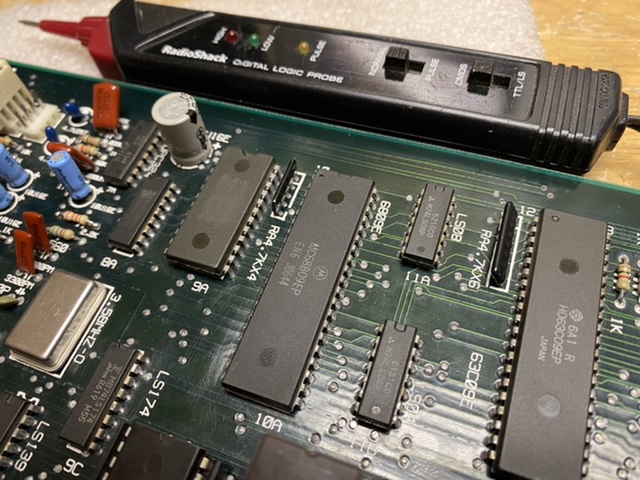 I’m going to now test the LS08 and LS04 TTL chips next to the 6809E cpu and see what they are doing. Any other suggestions of what to look for at this point?

I have repaired 2 rock N Rage pcb in the past with the processor hd63c09 broken, main processor, appears to be a common issue for this processor.

Thank you very much for your help.

So today I desoldered the hd63c09 processor chip, soldered in a socket, and plugged in another hd63c09 from a spare parts board. And I have the same problem.

Should I do the same thing for the 6809 processor?

Your approach to this repair seems confusing. As its not booting you need to see why by probing the CPU section which consist of CPU work ram and main roms. Also check if there are any signals that may cause the cpu to halt like sound hardware etc.

Good thing your soldering isn't too shabby though. Rock n rage isnt a very large pcb and only has a small number of ttls with the majority of the work done by customs. Im sure u find clues to whats wrong by probing the address bus, sync reset etc of the cpu section.

Using the logic probe on the 6809e gave these results. 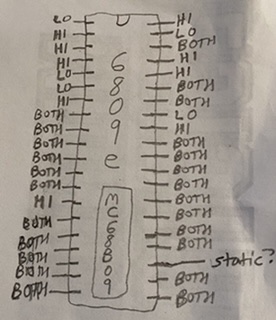 I got a strange reading on pin 23. It wasn’t HIGH, LOW, or BOTH. It was basically just static. Does anyone here know if these outputs are appropriate for the 6809e?
M

Sometimes higher address lines aren't used. It's probably not connected to anything. R/w should be toggling, A6 maybe should be a case of concern as that should be toggling too. Did you check if the reset is working? Should be low just on power up and then go high. Clock seems to be there but that needs a scope to see if its correct. For now I would just follow Pin 14 (A6) to see why it isn't toggling. BTW you should really label the pins on the diagram to make it easier to read rather than having to do the Sesame street Count Dracula thingy every time

Thank you so much for responding. And I apologize for the Count Dracula counting! Here is a much better picture for now: 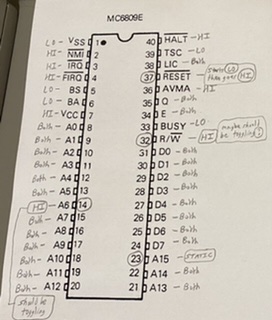 So following your initial recommendations, here is what I have determined so far. 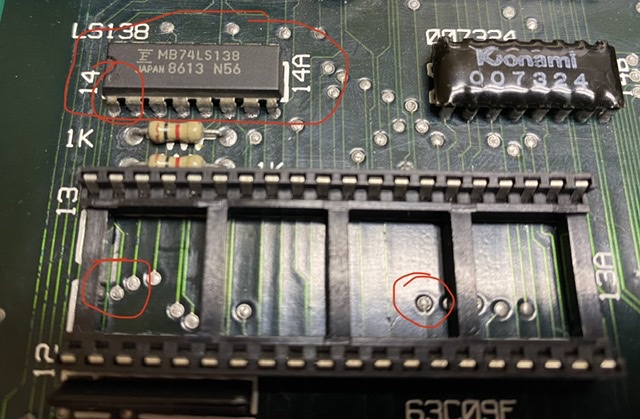 So let me know what you recommend next. I assume perhaps testing that LS138 and/or possibly replacing it, but please let me know if you agree or not.

Again, I cannot thank you enough for the assistance your giving me. 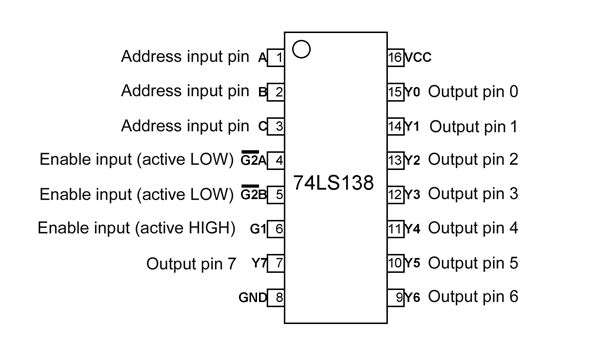 It's a Fujitsu so might be worth changing regardless but ideally you need to probe the other pins on it to be sure if its faulty or not.

so next step would be to study the function table, probe the LS138 to determine if it needs to be changed or not.

The best I can do for now is trace the LS138 to find out what goes where. 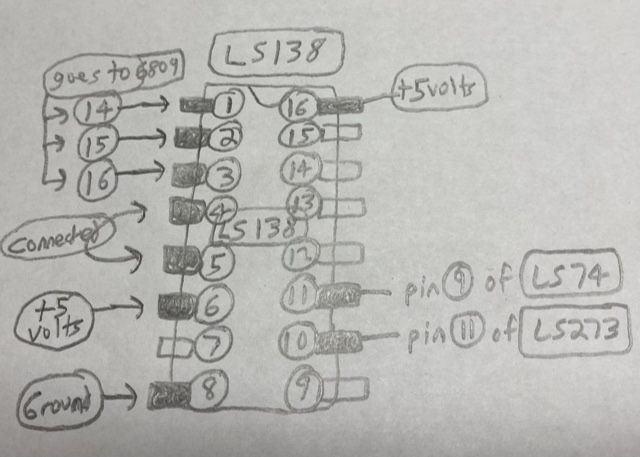 This is what I have determined so far. The remaining unknown pins disappear on me and I have not located where they go yet.
M

yeah replace it. let me know what happens

Well. The replacement went well. No damage to any points or traces. 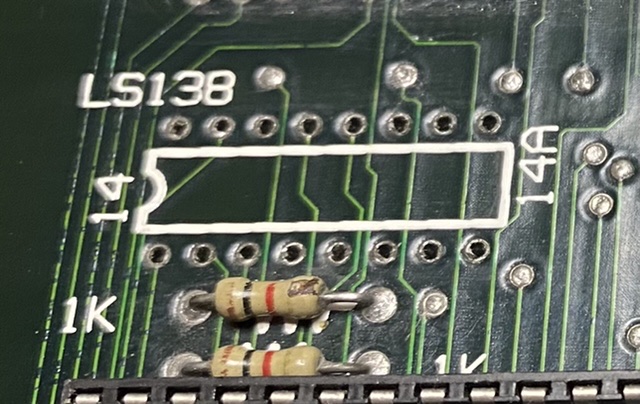 And the socket went in well. 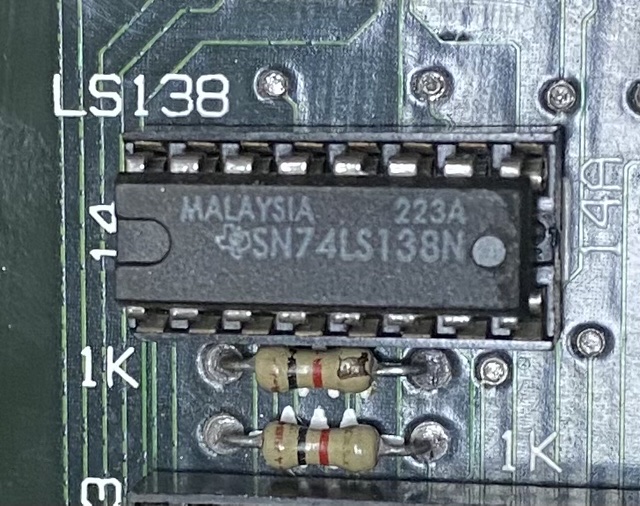 But sadly, the result was no change.
However, with the chip removed, I was able to determine all but 1 of the remaining connections to the LS138. Only pin 14 remains a mystery to me. 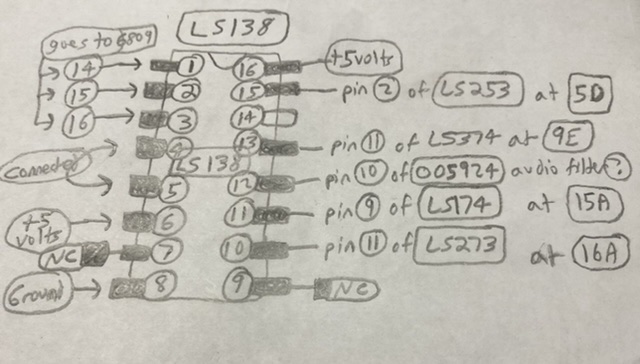 okay let me go find my rock n rage and see what's happening. It may take some time to reply though as I have a a virtual mame collection to dig through. In the mean time, can you see if pins 4 and 5 are still connected physicall? Via a trace underneath the pcb? Also where does it go to. According to the logic table, all pins high means the chip isn't getting enabled by the G inputs. So follow that and see where it leads too please.

Thank you, and yes, pins 4 & 5 are still connected via the trace on the solder side. And I followed it all the way to one of the pins on the large flat square Konami Custom chip 007842

One thing though that came to my attention this morning is that I made a mistake. The first 3 pins of the LS138 don’t connect to pins 14, 15, and 16 of the MC6809e, rather they connect to the 63c09e. The reason why I mixed them up is because they are the same size chip and next to one another.
M

Supergun said:
Using the logic probe on the 6809e gave these results.

I got a strange reading on pin 23. It wasn’t HIGH, LOW, or BOTH. It was basically just static. Does anyone here know if these outputs are appropriate for the 6809e?
Click to expand...

I just realised you have probed the wrong CPU. The main CPU is the 63c09e (insert facepalm emoji here)

No problem at all. Again, I’m very appreciative of your help here!

I will probe the 63c09e and post the results here soon.
M

I'm wondering what did you do to the original eproms with original eprom labels?
You must log in or register to reply here.
Menu
Log in
Register
Install the app
Top