I'm VincentNL a hobbyist reverse engineer currently working to reverse AM2 NLObjput Naomi Library model format. As of now an awesome Blender import plugin has been developed by Zocker_160, and it is possible to create on a limited capacity, new models or swaps for the huge library of Naomi / DC games (check out HoTD2 zombie's axe in Virtua Tennis).

Contents description seems to hint several specific Kamui SDKs, most likely used for the "porting phase" of Naomi titles to Dreamcast.
As usual, if anyone is interested on bidding for this item please send me a PM or reach me on Discord: VincentNL#5259

Please be aware it most likely is a recently burned copy as CD is the same type as Naomi SDK,
0 doubts on files authenticity but anyone interested needs to be aware of it, especially if he wants to resell. 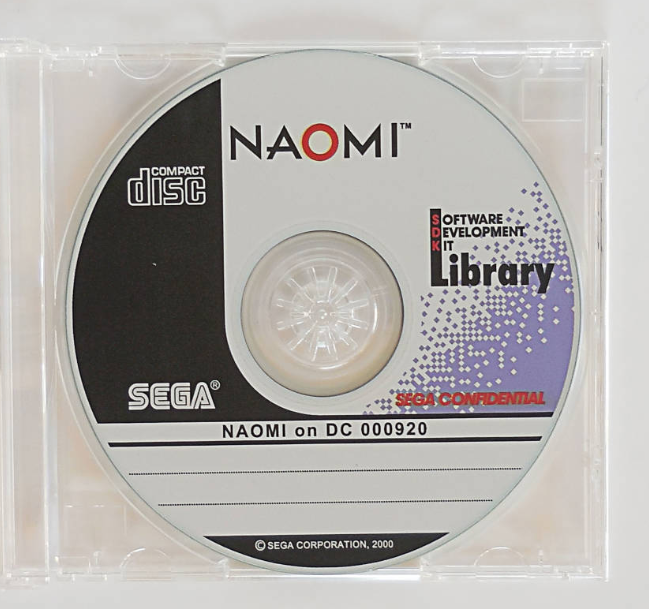 Multiple Kamui SDK and a set of tools used to port Naomi games to Dreamcast.

Cyo got it! It's history now. 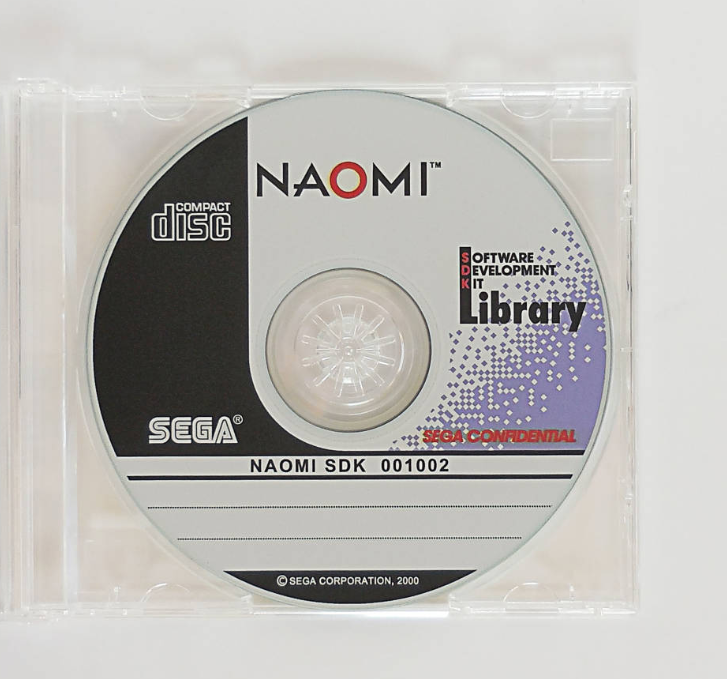 Naomi Library were developed by AM2 division, extensively used by SEGA between 1999-2001 in SEGA Naomi arcade hardware and SEGA Dreamcast games.
This one is the real deal. Official NAOMI SDK with debugger programs, AM2 Library documentation used for developing most of
Naomi Library games, DC ports & Monkey Ball on Gamecube, plus a set of 3D program plugins for creating data.
There are two known versions of this SDK in game strings, probably related to the model format: NLOBJPUT Ver.0.99 and 0.8 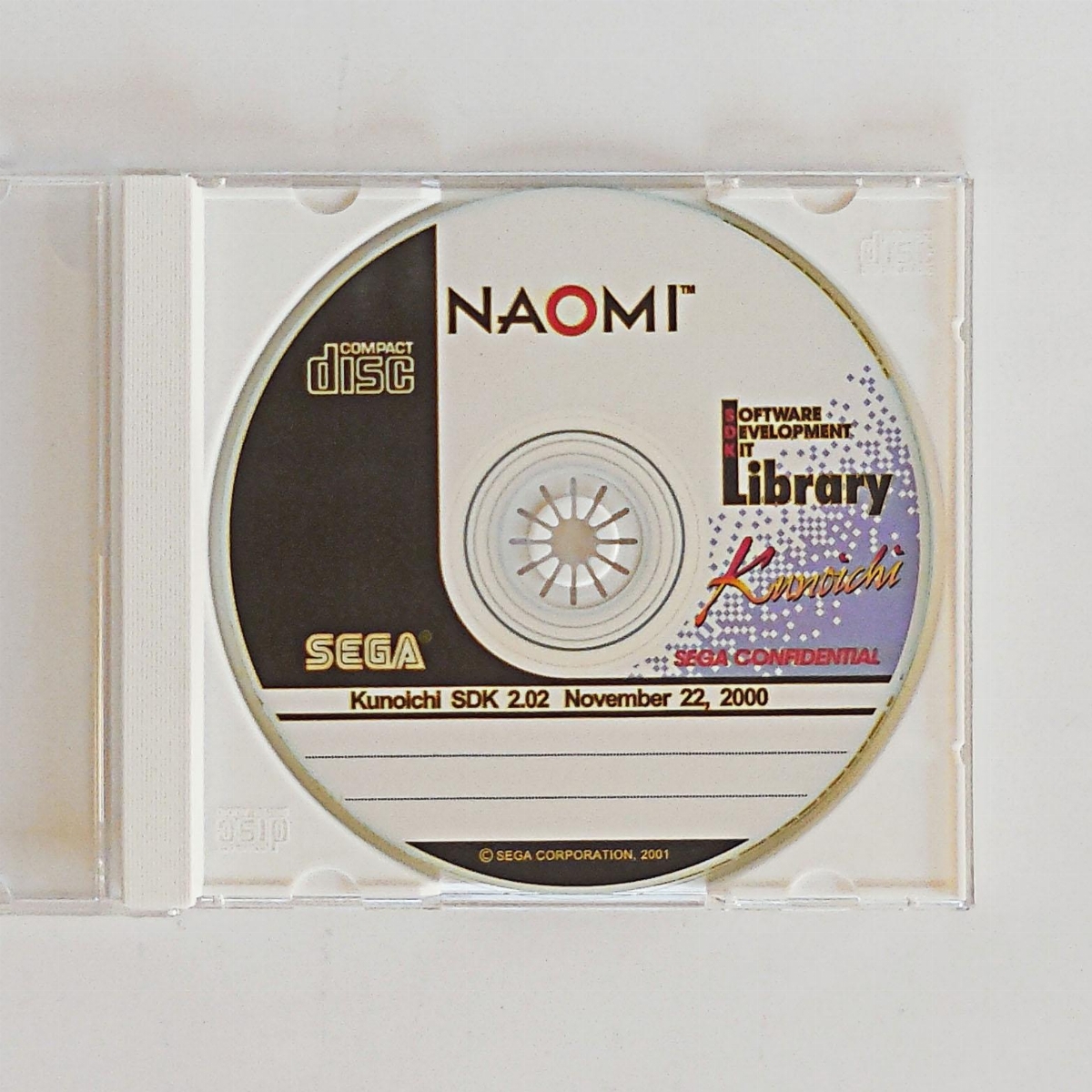 Motivated by the finding and with the help of awesome people, I were able to reach the seller to ask if he held another copy, obtaining information regarding Kunoichi SDK 2.02 filenames.
It turned out Kunoichi SDK 2.02 being an exclusive third-party oriented Naomi SDK, containing own exclusive libraries (lib.kn and NLAjamma) plus Katana SDK V2.00J separate libraries and tools.
According to strings, it were used to develop late Naomi games, but no Dreamcast known ports.

As it didn't contain the AM2 Naomi Library I were looking for, I've asked if he had other Naomi SDKs and got the real surprise:

He has 1 more unreleased Naomi SDKs!

The seller didn't put them on auction yet and refused to provide any further information unless these 3 items will be bought for an high price:

If anyone is interested on buying / setup a fundriser or discuss a strategy to bid these when / if they will be on Yahoo auctions, please let me know!


Thanks for your attention,

At those prices, its highway robbery. Also, wouldn't they only contain already-compiled libraries and headers as is usually the case? So we would pay $12,000 USD to get ahold of some discs that might contain some unknown register documentation and might contain additional documentation about commercial formats. Also, homebrew for the Naomi has long been possible already without leaked SDKs. It seems that better efforts and money could go to community effort to implementing open-source libraries and clean-room RE of existing games so that homebrew isn't mired with copyright issues. If the seller wasn't so out of their mind I'd say its worth it to pool money but that's a YEAR of rent for a lot of people all for a chance.

Absolutely,
I am not a collector either so I totally understand your point of view.
It's impressive to see SDKs being regularely acquired at unbelivable high prices in auctions but that's what it is.
If anyone of them wants to get their Naomi SDKs set and share their contents with the community now they can.

Official libraries provide a good chunk of unique library functions included in commercial games, and that's a huge boost for anyone up to RE or modding Naomi Library's Naomi / DC games. ( Monkey Ball / Dead or Alive / Shenmue 2 / Crazi Taxi / MVC2...)

As said earlier unless a wealthy collector want to help us, we may just need to wait for the seller to list them individually on yahoo auction at a decent price and setup a fundrising.

Regardless, after two decades at least we know they exist and their official codes!

VincentNL said:
Official libraries provide a good chunk of unique library functions included in commercial games, and that's a huge boost for anyone up to RE or modding Naomi Library's Naomi / DC games.
Click to expand...

are you sure ? I've RE'd a lot of Dreamcast games to some degree, also I have collection of Katana SDKs, but I found them totally useless for games RE.

I'd say it's way too overpriced, I'm 99.99% sure there will be no people who will buy that, until price will be reduced like 2x or 4x at least
so, I'd suggest just relax, do nothing, and wait for more adequate price tag

MetalliC said:
are you sure ? I've RE'd a lot of Dreamcast games to some degree, also I have collection of Katana SDKs, but I found them totally useless for games RE.
Click to expand...

Well, it depends on what you are actually RE.
For an instance, I'm using Ghidra for Rent A Hero translation and having access to the symbols of existing Ninja libraries allowed me to easily locate and use them for new functions.

But if you are crazy enough ( as I am ) to delve into RE model file formats such as bitflag values, any reference found in SDK docs were invaluable.
Luckily most TSP/ISP bitflags were shared from other SDKs but mesh flags are still being RE on repurposed debug environments within Naomi games.

Regardless yes, there's a large number of recycled libraries on these SDKs especially Shinobi / Ninja / Kamui, so what really makes the difference are unique lib files (AM2 Naomi Library) or those utl folders containing plugins (i.e. 3DSmax exporter) which can be exploited to build & study test files.

VincentNL said:
But if you are crazy enough ( as I am ) to delve into RE model file formats such as bitflag values, any reference found in SDK docs were invaluable.
Luckily most TSP/ISP bitflags were shared from other SDKs but mesh flags are still being RE on repurposed debug environments within Naomi games.
Click to expand...

you're showing me ISP/TSP PowerVR2 bit fields, which does NOT documented in any of Katana SDKs, nor Kunoichi SDKs, nor NAOMI SDKs, as well as there is (almost) none of any other low-level hardware documentation. nor lower level software (syscalls) documentation.
so, for me, as mainly hardware researcher and emulator developer, these SDKs almost useless, because they are all about higher level APIs, like Ninja, Kamui etc
Last edited: Dec 13, 2021

Hmm I collect a lot of shizzle from the Dreamcast dev , but this sdk it total useless in my eyes it’s not like it contained a new unreleased game .

Very interesting from a collector point of view, but definitely overpriced! An we got @MetalliC and other talented fellows that know the system well.

Yeah got to briefly know him and already helped so much with NL format!

As per Official AM2 NAOMI SDK, seller retired the offer and put the item on sale at half the price.
If anyone is interested please let me know!
Last edited: Dec 15, 2021

PLEASE DO NOT BID ON THIS ITEM!
We have a known bidder on it and do not want to compete against each other!

Back off, we'll get it. It'll be up on archive.org next month. One love.

My buddy grabbed it, I contributed a very small percentage.

atrac17 said:
My buddy grabbed it, I contributed a very small percentage.

How can we donate a little something to help him ?
C

I refused all donations before purchase. I couldn't talk atrac17 out of it though. He refused to listen :p
Actually I wont accept donations or contributions until the disc physically arrives at proxy warehouse. I didn't feel comfortable taking people's money on the premise that I could lose this. Then I would have to track every good Samaritan down and give them money back. Plus I feel morally uneasy accepting money from someone before the purchase is fulfilled. The bank of cyo (specifically for hoarding undumped discs and retro computers) is limping along for a few weeks though. Took a hit
If there is anyone that would like to contribute please talk to atrac17 or me on Twitter.

You'll find it on the usual place within two weeks. I promise.

This is very cool, @Cyothevile
You must log in or register to reply here.
Menu
Log in
Register
Install the app
Top