This one came to me as "parts or repair only" and had been repaired unsuccessfully by someone else. Normally this is a bad sign - nothing harder than undoing someone elses failed repairwork before repairing

But I gave it a go anyway

Monitor Was dead, dead - would not power on because power switch was stuck - suspect stuck power switch

Switched on power with working power switch - monitor would not power on - no green power light, no degauss sound, no neck glow, no static electricity on tube - suspect bad power supply

Inspected power supply - previous owner had attempted (unsuccessful) repair. Weirdly enough they had not swapped the big power transistors or the big caps that normally cause them to fail. But it was a bloody mess. Gave up trying to fix someone elses failure.

Measure power supply voltage output +115 good, -15 and +15 too low. This was interesting because this same power supply functions perfectly in a 14M2.

Power on, working as expected, fixed

The HOT is an NPN transistor with diodes and clamp resistors and all other kinds of weird stuff. It's hard to get sensible test results with a multimeter. 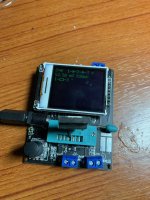 the bad one would not even test, For some reason it kept forcing the tester into self test mode.

Nice job getting it going

nice work! i was able to fix a commodore 1084p monitor once by changing the NPN too (used the same china tester as well) ! its very satisfying to repair an old CRT i must say.

your workbench must have looked great while you were operating - PVM's opened up and all over the place ?

evilsim said:
nice work! i was able to fix a commodore 1084p monitor once by changing the NPN too (used the same china tester as well) ! its very satisfying to repair an old CRT i must say.

your workbench must have looked great while you were operating - PVM's opened up and all over the place ?
Click to expand...

Those transistor testers are awesome aye? I think that one cost me twenty bucks maybe - the battery is worth more than the device. I dont know if there is a manual or anything but if you have one I'd love a link

Picture of the pigsty for your viewing pleasure - I'm between jobs at the moment so I have tonnes of time, but I can only buy cheap stuff for repair - so I have a lot of stuff that needs repair 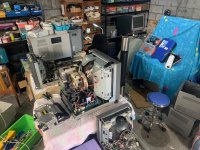 The HOT on these M4 units seems to kill IC601 and IC602 on the power supply. IC601 explodes pretty dramatically when it happens.

great photo thanks a lot for providing this

good luck with the rest of the monitors !

here is a link to a rather verbose manual

i had another manual but cannot find it right now, i just googled this one from a quick ali express search for "lcr-t4", well i started out searching for "npn tester"

For practise I swapped the broken tube from the BVM 20E1E that I'm working on into this PVM 20M4.

there is sometimes confusion about the difference between the "splotchy" colour purity issues from a shifted yoke, and the "rainbow" from a damaged Aperture Grille

This is what a damaged Aperture Grille looks like

Swapping tubes for Lulz is not recomended - the tube is tuned to the yoke at the factory - if you need to change yokes when you swap tubes (like I did here) it is a lot of work to re-tune the tube to the new yoke.

Eventually I will get around to repairing the power supply from this monitor, when I do this will come in handy, copypasta from another forum

Note there is no high–capacitance mains h.t. smoothing in this design, three 0.47 μ 630 V capacitors in parallel, C612, C613 and C638 are all that is used in this design!
Replace the two resistors R1602 and R1603 from the mains h.t.+ line to the source pin of the STR–M6524, the device will be repeatedly destroyed if either of these go high or o/c!
Next replace the following electrolytics in the power supply:–
C616, C618 and C619 and also make sure none of the secondary side reservoir capacitors C621/3/5/7 & C629 have gone rotten, replacing as necessary!
Next check the primary side snubber components for dry joints/open circuits :–
R603, R627 and R630 – these run very hot in service, the snubber capacitors C614 and C635 for open–circuits or dry joints, and the primary side flyback tuning capacitor C615 for open–circuits or dry–joints.
The opto–coupler PH601 (Sharp PC111) will also destroy IC601 if it goes too low emission – the LED does – replace this with a new one!
Finally make sure you're not using a really cheap STR–etc., ICs, some of these have been faked, and also remove the power supply transformer T603 from the PCB and resolder the wire ends where they connect to the pins!
The h.t. controller IC602 has no components associated with it likely to cause repeated failure, a short on the h.t. output line, which I will come to next, is the main thing that destroys this IC!

Replace C529, check R520, R532 and R543 (Fusible resistors sometimes go high in value) and resolder the wire ends of the Line Driver Transformer T500 where they connect to the pins. S/C turns in these aren't very common but Ed Dinning may be able to help if you suspect this!

The first thing I was thinking about when I read your tale was a "fake" or poor quality Line Output Transistor, try one from another supplier to what you previously used if possible!

Make sure the flyback tuning capacitors (C525, C526 & C527 in parallel) are all ok and not dry jointed, and make absolutely CERTAIN there are no burn–ups/dry joints in the scan coil plug/socket and the associated wiring, and also at the scan coils connection board itself!

Sony line flyback transformers are fairly reliable and in the years that I worked on monitors I never had to replace one!

Finally it is worth replacing the two electrolytic capacitors C523 & C592 associated with the beam–current limiter protection IC, IC500!

There's a great deal to go through I admit, but with a monitor as complex as this one is, you can't afford to take short cuts or miss things, this is why I've written it out in so much detail!

One of those little Chinese colour screen LCR–T1 Component Testers (about £20), etc., will be adequate for checking out all the non–electrolytic timing or tuning capacitors I enumerated above!

Finally make sure the h.t. voltage and over–voltage protection adjustments as detailed in the s.m. are accurately carried out as directed in the book once you've got it working!
Click to expand...

That's my thread so if you beat me to it, let me know.

FWIW I've been through his checklist and the only anomily I've found were R1602 AND R1603 reading slightly low in and out of circuit. I'll be replacing the caps noted (most have already been done) but I've a feeling it's something else on that power board or fake components. Since these aren't available new anymore, it's pretty much a crap shoot.
Last edited: Apr 8, 2022

Ikeda said:
That's my thread so if you beat me to it, let me know.

FWIW I've been through his checklist and the only anomily I've found were R1602 AND R1603 reading slightly low in and out of circuit. I'll be replacing the caps noted (most have already been done) but I've a feeling it's something else on that power board or fake components. Since these aren't available new anymore, it's pretty much a crap shoot.
Click to expand...

I also just posted in that thread regarding my M4U (US variant).
Was trying to clarify if the US model can take a 240V input since the schematic and parts listing is the same for all models even though the service manual description at the start says 120VAC only for the M4U. Someone also just posted up the commercial brochure which goes on to say the US model is also multi-voltage.

Having checked my actual PSU all the parts are as per the schematic but it appears to be triggering some overvoltage protection using 240VAC, it initially powers up generating the right voltages but then proceeds to shutdown, needs more looking into.

For reference there is another thread here @Ikeda that may be worth a look
https://stardot.org.uk/forums/viewtopic.php?t=15930
You must log in or register to reply here.
Menu
Log in
Register
Install the app
Top