I picked up a dead Raiden Fighters a while back and I'm working my way through it. Right now it gets power but aside from some occasional interference on the screen, it doesn't do anything. A couple odd things I noticed, the cart was decased and it had some official looking label that is Korean maybe? Also the CPU on the mobo is clocked at 40mhz whereas all the documentation I can find says it should be 25mhz. The single PCB boards are supposed to be 40mhz, but this is not that. The oscillator next to the CPU is 50Mhz so it seems this 40mhz processor is getting run at 25mhz. I can't see any signs that the processor was replaced, but I have no idea why it's set up like this. Flexing the board doesn't change anything and I don't see any obvious signs of damage on the board. It has all the custom Seibu chips along with the Yamaha sound so it doesn't look bootlegged nor like the single board setups.

being dead and not showing anything on screen is not a "weird" issue, and is pretty common on these games when one of the many large surface mount chips on the mobo develops cold solder joints. I've got 3 dead boards that all exhibit the same behavior.

the cart not having a case is also quite common for Raiden Fighters 1, that's how it was shipped in some regions.
S

The weird part to me was the 40mhz processor when all the documentation points to a 25mhz processor. I didn't know if this was some weird hybrid or just a regional difference.

There are two versions of the Seibu SPI mobo


I don't have any reference images of the smaller mobo variant but I believe the CPU setup is identical.

to my knowledge neither of these PCBs come equipped with a 25MHz crystal, they DO have a 50MHz crystal.
S

I have the same board as pictured. I found a picture of the smaller board, but mine is definitely the V2.0 larger board. As I understand it, the single board version has the 40mhz chip with 40mhz crystal. I have a 40mhz chip and a 50mhz crystal. The other thing I noticed is that when connected to my cabinet, the coin meter will sometimes start clicking. The internet tells me the z80 can be responsible for this. Maybe it's just a red herring.

Don't worry about the CPU. The AMD386DX you can find in many Seibu SPI boards was rated at 40Mhz and was at the time cheaper than Intel's offerings. It's actually underclocked on the SPI motherboard. The actual clock signal is 25MHz on the boards I've looked at (50/2).
Seibu and TAD boards do use the Z80 for credit input and so on. I would replace it if I were you.
S

Bringing this topic back up again cause I'm able to work on it again. I don't believe I had a good desoldering tool the previous time, but now I do. I swapped the Z80 with a known good one and the issue persists, no boot (just some lines on the screen), but the coin counter isn't going crazy anymore. I put the old Z80 in my NeoGeo and it comes up with a Z80 error, so it was definitely bad (and it burned my finger for good measure). I checked the reset line but it is stuck low. I traced this back to a PAL but then working from the reset circuit side, it looks like it's fine. The PST518 goes into the inverter which eventually goes into that PAL. I tried tying the Z80 reset directly to that pin, but still no change in the system.

To finalize on the clock question, I measured the frequency out of the oscillator at 50Mhz and then it goes into the 74AC14. From there it goes directly to the 386 clock input and the SEI600 custom next to it. But it's still 50Mhz, not 25Mhz. I would have expected it to go directly to the SEI600 on one pin and then go out to the 386 on a different pin at 25Mhz. Am I misunderstanding how this works? How is 25Mhz supposed to be fed into the CPU?
S

I also forgot to mention that I tried pressing on the customs and flexing the board in various places, but nothing changed.
S

After doing a bit more research it looks like the CPU will run at half the clock speed, so it sounds like that's a non-issue.
S

Bringing this back up to see if anyone has any ideas. I probed the Z80 without the ROM board connected and the clock stays low while the reset starts low and then goes to high. After I put the ROM board on (after powering it off), the clock comes to life but the reset pin stays low. For the life of me, I can't find where the clock pin connects. On my Raiden 2 it goes to the Yamaha chip, but not on this board. And it doesn't appear to go to the ROM board either. I verified the ROMs on the top board to make sure that wasn't an issue, but nothing seems to make a difference.

As a last ditch effort, does anyone in the US have a Seibu motherboard that would be willing to test my cart? At least that way I can eliminate one piece.

shess said:
As a last ditch effort, does anyone in the US have a Seibu motherboard that would be willing to test my cart? At least that way I can eliminate one piece.
Click to expand...

So jepjepjep was able to confirm that my cart is working properly (albeit with some graphical glitches) and now I can focus on the mainboard. Huge thanks to him for doing that! Still not quite sure where to go though, guess I can verify the cart connector on the main board has no wiggly pins. I tried flexing the board while it was running and it didn't change anything.

check for lose pins the big QFP custom chips. putting pressure on them wont work on these boards because they need to have good connectivity on boot or they'll just crash and never recover.

also there's a good chance one of the SOP graphics ROMs has lose pins if you're having graphics issues. (that you CAN confirm by putting pressure on the chip while running).
S

I was able to check most of them because they sit along the edges and my microscope can reach them. There's a big fat one in the center that my microscope can't reach so I might just reflow it anyways. Once I get the board working then I will definitely turn my attention to those graphics ROMs. Now that I know the cartridge is good, I'm still trying to figure out why the reset on the Z80 transitions to high without the cartridge but it's stuck low when the cartridge is plugged in.

I don't mean to derail this thread but testing out @shess 's RF cart led me to a problem with my Viper Phase 1 cartridge. I thought I would share my experience in case it helps others with troubleshooting.

When I went to re-flash VP1 back to the motherboard, it would boot up fine, and it would play fine prior to switching carts, but when I went to flash the data to the motherboard it would boot and start the process, but then it would freeze right before entering the countdown. I read in another thread that the flashing process only copies sound data to the MB, so that led me to inspecting the rom at U0215, which showed some signs of corrosion on some of the pins. It turns out that one of the legs was no longer making contact. Once identified, I was able to wire a jumper and the game was able to flash the data onto the MB. Success! 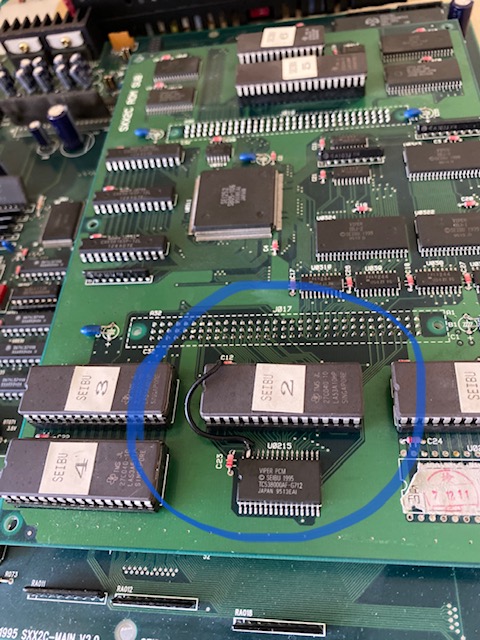 Well, I'm making progress. I reflowed the solder to the QFPs and the mainboard connectors to the cartridge. Now I have some garbage that sometimes has sync issues. I still have the behavior where the Z80 reset line is stuck low when I have the cartridge installed. Removing the Z80 doesn't change the picture and pressing on the board doesn't change the behavior either. Maybe I'll try reflowing the QFPs again. After reflowing the solder to the cartridge connector pins on the mainboard again, I'm finally able to get it booting. I'm much more optimistic about this board now. Now I have to do the SPI revive and hopefully will be back in business.

Seems I was a little premature. I can't get it to reliably boot up to that screen. Sometimes it stays on the garbage screen. I tried with the JP and US roms, but it's the same. I also tried the revive ROMs, but I was never able to get the menu to come up. I even tried it on MAME and it didn't come up there either. Has anyone tried to boot the revive ROMs in MAME? Should it work?

Bad checksum may mean that the flash chip on the motherboard is bad. You could try to replace it.
You must log in or register to reply here.
Menu
Log in
Register
Install the app
Top