Hi all, I'm seeing a bunch of Astro city cabs from a Yaton Arcade site on facebook, and they seem like really good prices, but my spidey sense is going off. Can someone verify for me that this is legit, or at least not a total screw job?

I'm a total noob at the arcade cabinet game, let alone candy cabinets, and I'm not looking to burn my house down or get my lunch money taken.

I've bought plenty of parts from him with mixed experiences. He always has a great price, and often has the parts I am looking for.... but those parts come either COVERED with grime or with an awful coat of a rattle-can paint job (with drips and dust dried in it.) Most of what you get will work, and it is not a bad deal if you have low expectations for how things will look. They can often be cleaned up.

My guess is his cabs have been "restored" using the same type of paint job that the parts I have received were.

Also keep in mind that shipping from china is no small task, especialy for a whole cab. I cant imagine how long it would take for him to get one to you, not to mention the cost.
V

So you get what you pay for, but you will get it? That works for me, I can work with that. I can put the spit shine on it.

I've bought a bunch of stuff from him.
Keep in mind that you are buying large, ex-commercial appliances that are pushing 20-30 years old in some cases, and will likely require some elbow grease no matter what.
Just be observant and do your research into what you are buying, same as anything. I've not had a bad experience thus far.
Got my VOOT 5.66 cab from him in fact!

Expect a whole cab (or multiple) to take in the range of 2-5 months to arrive at your door, as all the big stuff is crated and shipped freight, by boat. His shipping rates are usually pretty reasonable all considered.

I've bought lots of parts from him. most of the time his prices are good, his packing is mediocre and the parts look like they've been dragged through a swamp... but you get what you pay for.

A close friend of mine did buy a container of Sega cabs through an eBay listing of his, after dragging his feet for months Yaton never came through with delivery, the order was back-charged so my friend got his money back but it also resulted in Yaton's first eBay account getting shut down, he's had several accounts since then.

On the flip side I do know others (like Smurph above) who did eventually get their cabs.

I don't think he's a scammer, I just think he doesn't care about the products he's selling or the people he's selling them to. he sees these arcade parts as trash and is doing the bare minimum effort to make the most money selling that trash to foreigners.

My advice is to only buy from him if he's selling something you can't get anywhere else, or the price is so cheap that you don't mind if it's filthy and broken, or never arrives.
Last edited: May 25, 2021

I've ordered parts and games (MVS back when it was his main sales) for years from Yaton. He does get in hard to find parts here and there. I got some Q25 parts for spares, a replacement back door, and front door just to steal its special lock tang (the door was rusted and had holes in the bottom). I spotted it and he reduced it for me.

My advice is look at everything with a magnifying glass if you can. He has responded to me sometimes when I request additional photos. Check for rust, cracks, water damage, galvanic corrosion, etc. As others have stated, expect it to be grime and in need of a full clean up. Most plastics of the 90s era that had no UV protection. Expect yellowing.

I bought from YATON a little while ago on Facebook, around October 2020. It was kind of messy, but turned out well at the end though.
I needed some spares for an Astro City, he sent me a Nanao MS9 at the end LOL. He totally confused my order, BUT the good thing is that I was looking for a MS9 though.
Nothing to complain about.

By the way, Is YATON the same guy as Jianming Yao on Facebook, or are these two different entities?

I'm trying to buy some parts from Yaton, but he sent me a different Paypal back on October:
davisyao1127@yahoo.com

Now he wants me to deposit on this one:
gouqinghua0314@sina.com

Sounds a little fishy to me but I really need those parts. Has anybody transferred to that account yet?

He seems to switch Paypal accounts every 6 months or so.

I think my favorite Yaton purchase was when I bought 2 NVS-4000 PSUs from him. I got 4. Not all at once though, I got 2 of them relatively quickly and then 2-3 months later he must have thought he didn't fulfill them and I got another 2. Imagine my surprise when I go to the post office for a "We missed you on this international package" slip expecting like a Switch game import or something and out comes the poor post office worker with a giant heavy box.

well small world: the dude whom I bought a chewlix from in May just received an Astro City ... from Yaton.

He messaged me cause "there are a few screen issues" and is wondering if I can help.

I've bought from him, small things like MVS carts. They worked, but rarely came with intact labels and looked like they were dragged through the mud.

I would not trust getting a cab from him without knowing that you're going to put in a ton of sweat equity and your potential savings are going to go to repro items and repair parts/services.

Have ordered parts and games, have received what was being sold.

Also, back in the days (like 15ish years ago) he used to sell MVS carts for dirt cheap that looked like they had been filled with volcano ash or something. Still super happy with those as well though.

You'll get tested deals, but it'll be grungy.
Hes incredibly responsive, and fair.
It takes about 2 months to receive anything from him.
I once bought a G-Net from him for $120 complete and it came with a pube.
It's still hanging on my bench today for whatever reason. 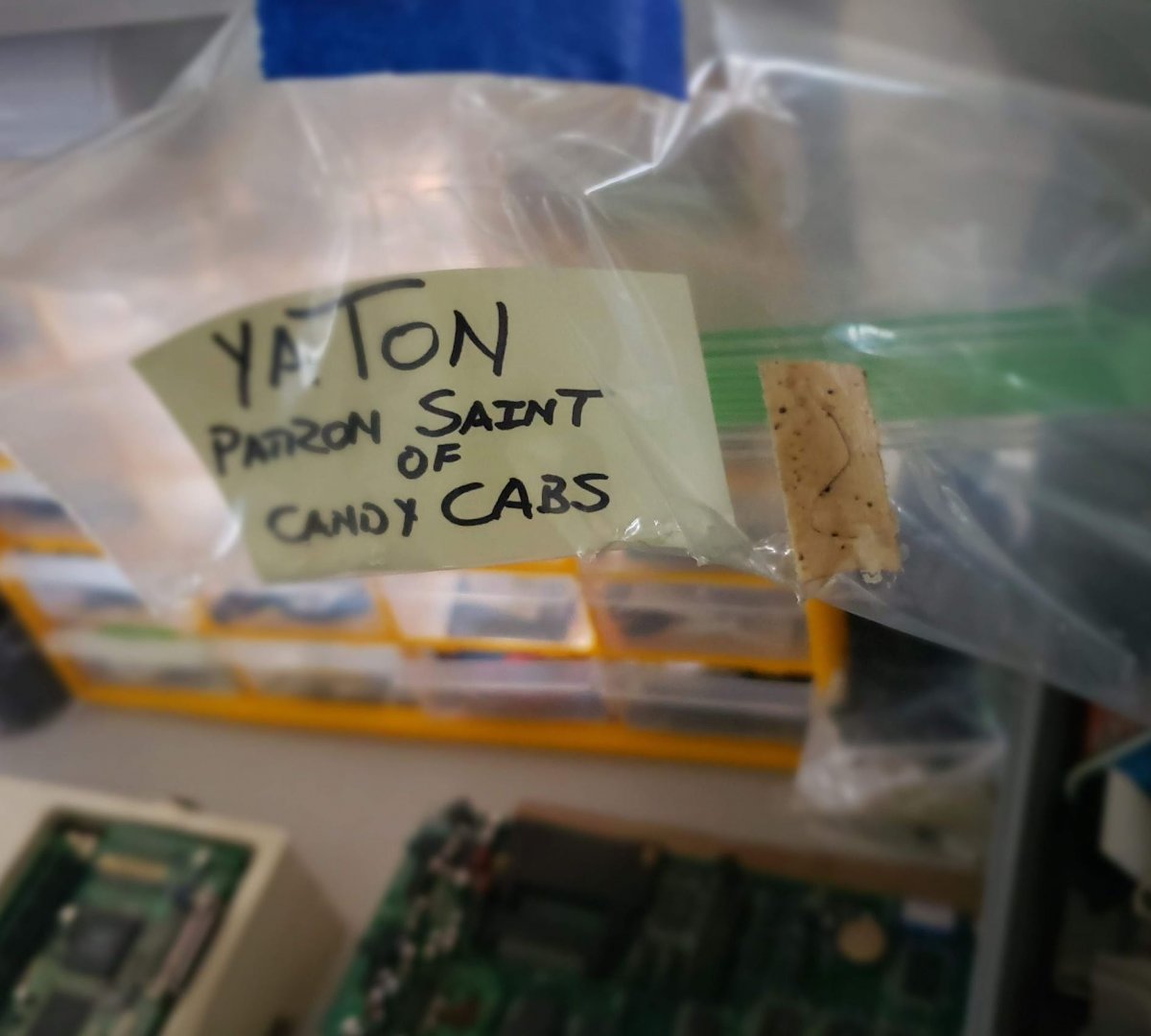 I bought a bunch of Aero City parts off him that I’m pleased with. Got a monitor bezel advertised no cracks(small cracks), a control panel bezel, and a pair of the casters. All items in fair condition and reasonably priced.
S

I bought a Sega JVS IO board and Sega LED Gun Sensors. The prices were much cheaper compared to other ebay sellers and the PCBs condition is what as on the pictures. They are still working till now. My 1st order I got it around 2 weeks and 2nd order because of COVID-19 pandemic just started, it took around a month to get to US.

I messaged him on ebay asking for a specific Astro City part. He replied back a week or two later with a photo of the part I wanted, listed it, and I bought it. Really good price actually, and he packed it well for shipping.

It's been mixed for me.

One time I bought a set of Sega keys and they went around the world .. twice. I think @nem ended up with them at one point.

Another time I bought some NOS replacement speakers for my Blast City .. they were direct fits out of a Sega Racing. They shows up in like 4 weeks and were indeed NOS and pristine shape.

I bought some misc. game parts and they showed up in a reasonable amount of time and as advertised.

I bought a couple sets of front doors for a Blast City from him. They were super dirty when I got them but once they were cleaned they were actually in pristine condition .. I guess teh dirt layer protected it.
D

For the record, I bought an MVS U4 from him. It took forever to arrive, the communication was bad and the machine was in worse shape than it looked from the photos.

I'm going to get a few bits of it resprayed or powdercoated.

Overall, very happy given how it could have gone. Would do again for a cab I could never get otherwise.
You must log in or register to reply here.
Menu
Log in
Register
Install the app
Top