Mukuro_W said:
finally I forgot to mention the CPT-003A model which was distributed here in Italy in 1996 in a few pieces, this version I think quite rare accepts 220v and 240v I never tested it, but it was present in my kit of Red Earth Eu
Click to expand...

i am plannung to buy this one with the amp... not sure though if all this will work fine.

Mukuro_W said:
Now I'm going to build an external volum pot, every one for channel ..
Click to expand...

could you perhaps share the Information About the pot mod once you are finished?
Right now i am using this nvs 4000 psu with Sound amp in my cab but when i ad a mono pcb i have Problems with the Sound so i thought to use a normal psu for mono Sound and power the pcb and use the Q amp only for the Stereo pcb externar so that there would be perhaps no interferance

for @wuemura and all other people how might be interested in the discussion that arose earlier: I've reached out to ValleyBell asking to shed some light (at least for me) on the QSound situation both regarding MAME and how it works and he has given me permission to copy-paste his reply here:


ValleyBell said:
Hi donluca,
let's begin with the MAME story:
Initially, one of the MAME developers didn't want to accept superctr's submission, because he wanted a reason to finish his DSP16A dynamic recompiler. That would've allowed MAME to emulate the QSound using the actual DSP code at an acceptable speed. (Dynamic recompilers are what makes it possible to emulate PlayStation 2/GameCube/Wii consoles on the PC.)

However, other developers stepped in, disagreeing with him, so they ended up accepting the improved QSound emulation.

The QSound is actually a standard DSP16A with a custom ROM, which is called "QSound".
The DSP has only stereo output and does its surround sound by intelligent phase shifting (similar to the "surround" feature some SNES games offer, but in good) - and a few filters. It's all done in software.

The emulation present in MAME and VGMPlay/in_vgm is a very accurate port of the machine code inside of QSound ROM to the C/C++ programming language and thus is 100% accurate, except for some possible analog filters that might be applied to the output of the DSP.
This might be an interesting read.
Click to expand...

I have reworked all directly in assembler about 25 years ago and all was sent to mame team..

@donluca They are working with the information they have available and by the way, they are not wrong, this is exactly what the DSP16A does as I have already described earlier, also, the technology of the time didn't allow QSound to be processed (decoded) in real time and therefore the need for an extra hardware to make it work the way Capcom intended.

Only after ValleyBell and superctr finish their work I was able to decode QSound information hidden inside the Stereo output from MAME.

And for the last time, this it's not new, there are matrix encoded albums back in the day in a matrix 4-2-4 format, they down-mix 4 track music into stereo them decode it back to 4 tracks/channels again like QS (Quadraphonic Sound), SQ (Stereo Quadraphonic), DY (Dynaquad), etc, etc.

Here a few examples, this is Black Sabbath Iron Man decoded from a 1970 Quad-Mix:
http://www.mediafire.com/file/izterr6cq6y96d9/sample-01.mp3

This is a raw decoding (not filtered or finished) from a more modern music from 今井美樹 (Imae Miki) 卒業写真 (Sotsugyo Shashin - Graduation Picture)
http://www.mediafire.com/file/b26h88bcuffjvfe/sample-02.mp3

QSound chip works more like a maestro organizing who goes what and when as it put all this together it uses the QSound matrix to encode it. When properly decoded you have more wide stereo image/stage with special effects in some cases like the Street Fighter Alpha/Zero 2. As people already experience, it doesn't give you a "WOW" effect like Dolby Atmos that you can hear things coming from different directions, QSound it's more of a cool experience and nothing else.

While I think you are correct I must resume my old papers to confirm or not..

@wuemura according to your own researches, they *are* wrong (EDIT: to better clarify, "they" is referred to ValleyBell and superctr), because as you can clearly read in ValleyBell's information, the phase shifting is done *in software* and not on an outside board and, again, as stated in the quote I made above, the QSound chip does actually that, it *decodes* the audio and the result, as once again stated, is a simple stereo track which just needs to be played back.

And this is really the last from me because I've grown tired of the argument.

You've made me second-guess myself to the point where I had to go and ask ValleyBell for confirmation and I won't go through this any longer. If ValleyBell wants to chime in he's free to do so: I've given him the link to this thread.

And, just to wrap it up: you mentioned a thread on github where one of the guys responsible for implementing the QSound technology into CPS2 chimed in with his insight. That thread is in ValleyBell's quote and I'll report it again here.

There's not much else to add, really.

donluca said:
@wuemura according to your own researches, they *are* wrong (EDIT: to better clarify, "they" is referred to ValleyBell and superctr), because as you can clearly read in ValleyBell's information, the phase shifting is done *in software* and not on an outside board and, again, as stated in the quote I made above, the QSound chip does actually that, it *decodes* the audio and the result, as once again stated, is a simple stereo track which just needs to be played back.
Click to expand...

Where did I stated that "they" are wrong?
Who said that the "phase shifting" it's done in hardware?
So, the katananja guy it's right, right?

No answer after 24 hours so, this will be also my last response on the matter because I'm over 50 years old and I have better things to do with my own life. Again, the guy just want to be "right" but he doesn't show any hard evidence of anything, anyway, this is the last you will hear from me.

To understand how QSound works people need to have some knowledge about matrix encoding/decoding and psychoacoustics, thanks to ValleyBell and superctr work, now QSound is a reality for those without a original CPS1/2 board and to unlock the QSound secrets people need that QSound matrix decoder or the Capcom power amplifier.

Those BLACK TRACKS were decoded from the stereo track. 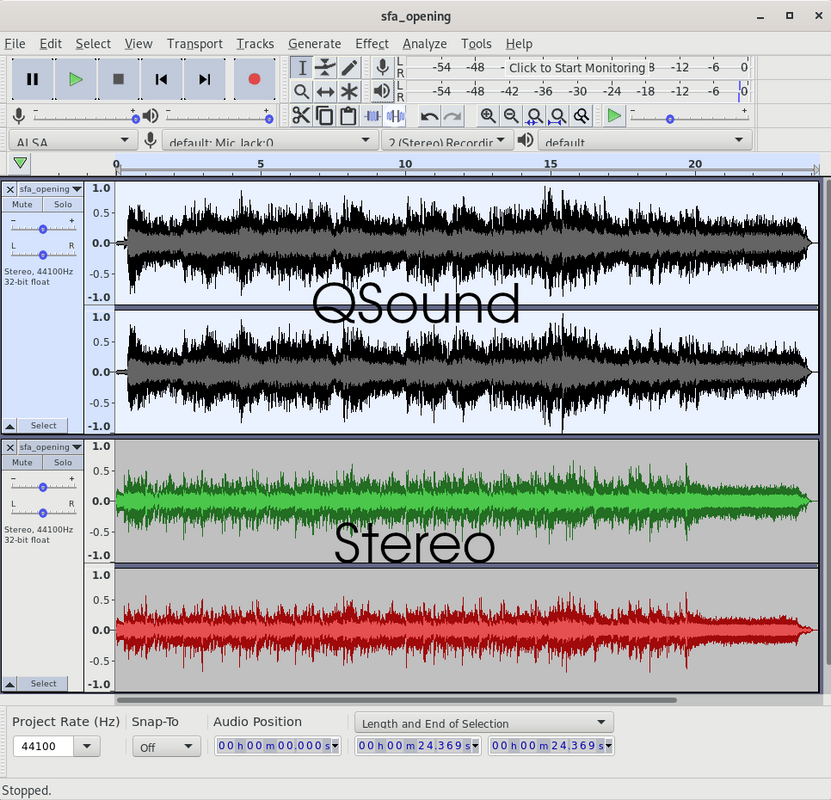 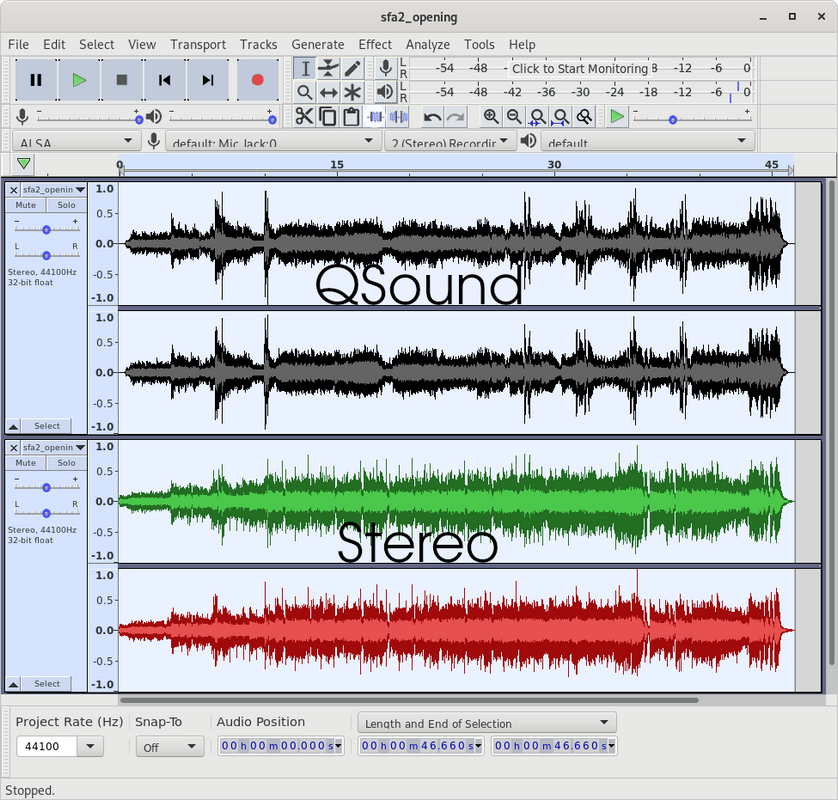 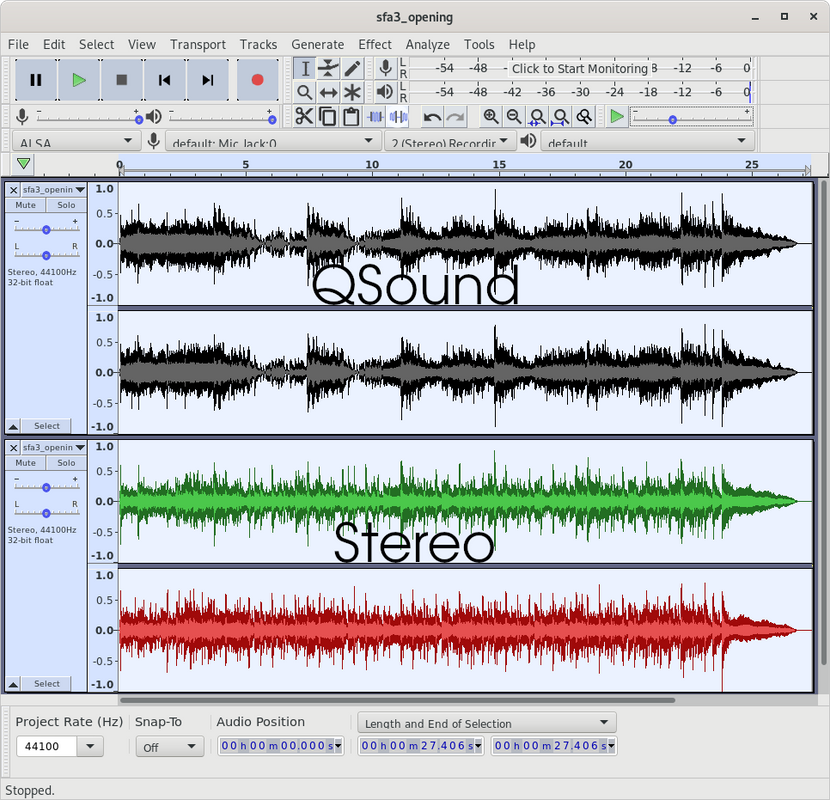 I've created a playlist and uploaded this sound tracks to my Soundcloud account, here is the link for the playlist, by the way THIS DOESN'T WORK WITH HEADPHONES.

This is all the hard evidence I can share with you.

Also, I hope @donluca check the soundcloud account name, my account was created 4 years ago and it's the same account name I use with github, who knew huh?

Oh, by the way...
Make sure you read that github post again:
https://github.com/vgmrips/vgmplay/issues/51#issuecomment-459873091

Thank you everybody for the opportunity, if you want to enjoy CPS1/2 QSound DO NOT trash that amplifier, make sure you use a pair of aligned speakers on your cabinet, good luck with QSound development.

Hi,
this thread helped me a lot with my qsound amp and understanding how it works! Thank you wuemura for the informations about this system.
This topic also was the reason for me to register in this forum

I am not sure if I missed something but I am the first one who got this amp running on 12V DC?

Test setup is a agilent laboratory power supply and a Laptop with audio Cable. At the first power up, the AMP drew >2A! and was not working correct. I think this was caused by the charging of the capacitors.

After about 1 minute the current stabilized to about 300mA with speakers running low to mid volume.

perhaps this info helps someone in the future

I goofed up.
I was recapping my sound amp out of my big blue and dropped it before I could solder a few caps in.
the popped out and i'm unsure of what goes into three spots - C19, C18, and C43.
Anyone able to help me out here?

bartre said:
I goofed up.
I was recapping my sound amp out of my big blue and dropped it before I could solder a few caps in.
the popped out and i'm unsure of what goes into three spots - C19, C18, and C43.
Anyone able to help me out here?
Click to expand...

How many amperes does the CPT-002B Kitamura Kiden Transformer 14 Volts deliver for Amp Qsound PCB ?

My problem is I’ve been trying to add a subwoofer while preserving the Q-Sound, but every time I try to split the audio signal to send it to the subwoofer (either with a splitter cable like the one shown in the photo or with a multi switcher) I get an annoying thumping sound that can’t be eliminated.

is this due to one of the audio channels not being grounded (as someone mentioned before)? Is there a quick fix?

Thanks for the help! Hoping to add Q Sound to my Sega Astro City if this works out.

So i ended up using a splitter to send the post-amp sound to the subwoofer. Problem solved!

I'm playing with the idea of adding q-sound to my 1st gen Big Blue. Given the cost of the original parts, I was hoping to do this with a aftermarket stereo amp setup. Hopefully with not too expensive hardware or major cabinet overhauls; does anyone have a similar setup with pics?

The QSound amplifier has been retro-engineered, there are just some caps and resistor values missing.

Hopefully this is finally going to put to rest all of the speculation which arose in all those years.

FYI I created a dedicated thread on the topic: CPS QSound Amp Reverse Engineering
The values have been filled now

WydD said:
FYI I created a dedicated thread on the topic: CPS QSound Amp Reverse Engineering
The values have been filled now

Oh, woopsie. I missed that, sorry.

By the way, thanks for your efforts, your work will greatly help understanding this kind of hardware better and help people out there repairing broken boards.

YAMAHA AST SYSTEM audio is installed in the Capcom cabinet, and there is no dedicated equipment for Q sound, and there is no function to decode the encoded three-dimensional sound.
I will omit the details of YAMAHA AST, but in short, it is an audio that is strong in the bass range.

In addition, this AST amplifier operates as a set with a dedicated AST speaker, and since the drive system is different, there is a risk of destroying the speaker if it is connected to a normal speaker. Be careful if you only get the board. It's not just that the amp is powerful.

AST is sometimes referred to as YST, but it is the same.

It seems that the data sheet of MM1326, which is a QXpander, has been taken up several times, but this is a device that makes a normal stereo signal a pseudo-three-dimensional sound, and is different from the Q sound adopted by Capcom.
It's a mistake to relate this to this story, and it's also a mistake to connect to CPS2.
You must log in or register to reply here.
Menu
Log in
Register
Install the app
Top