button 5 is the select button on MVS.
M

Thank you. Will try that and report back
M

button 5 is the select button on MVS.
Click to expand...

Doesn't work. R button is configured as Select and the system will not accept the Start + Select combo no matter what
A

Curiously, the combination start + button 5 never worked for me
M

Arthrimus says it is impossible without a re-write of the code. I guess he never considered Unibios
M

It should work, just compile the source selecting that chip.

This is an awesome project. Huge thanks to @Arthrimus and Frank for putting it together.

I've been working on these over here https://www.arcade-projects.com/thr...shared-sat2neo-saturn2db15.18282/#post-295204 Great success, works as expected.

On the HSS-0136 the directions and the start button work as expected, but the face buttons dont work. This is expected behavior the first time a new sat2neo is attached. But when using the virtua stick I cant get the button combos work for me either, 3 buttons + start does nothing, and I cant enter remap or autofire mode. Again, this works perfectly with the saturn gamepads, its just the Virtua Stick that has the problem.

Has anyone had success using an HSS-0136 with the Sat2Neo? I'm guessing that the HSS-0136 will either have a different MUX IC, or it is somehow tied up with the autofire selecter switches that the HSS-01136 has. I'm perfectly happy to pull it to bits and start poking around, just checking that it might already be a solved problem? 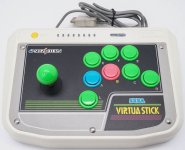 Update: Fixed. It was in fact the autofire selector switches that were stopping this from working correctly.

I had fantasies of hooking this up to a oscilloscope, measuring the output pulse, then modifying the code to support. But when I pulled the HSS-0136 open I discovered a much simpler fix. Someone had spilled cola(?) into the selsector switches and several had failed closed. 10 mins with the IPA and fibreglass pen fixed that.

Now working perfectly. Can confirm that HSS-0136 functions as intended when free of 20 year old food. 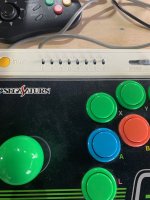 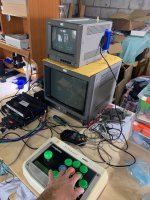 Finally got around to building a few of these and ran into some trouble, so I thought I'd share.

I'm using an ATmega328p. From the Github repo the only hex I could get to work was "saturn_controller_demux_RMAF_Retro_Bit_Fix.ino_atmega328p_8000000L.hex". None of the other hex files in the repo worked. But I wanted to use the latest version of the code so I could map the coin button, so I compiled my own hex:
To program the chip I used a Pocket AVR from Sparkfun and avrdude. Since I did this on my Mac the easiest way to install avrdude was to use Homebrew and "brew install avrdude". The command I used to write the file was "avrdude -c usbtiny -p atmega328p -e -U flash:w:saturn_controller_demux_RMAF_RBF_SLFIX.ino_atmega328p_8000000L.hex -U lfuse:w:0xe2:m"

Hope that helps someone.

Super necro bump! I have a batch of the original Frank_fjs v1.6 adapters assembled and ready to go.

Anyone know of a good source of the extension cable? Seems like all of the ones available now are much lower quality. I bought 3 from different sources and they're all the same. The controller plug is very loose and basically falls right out, there is no grip. I had one that I bought 2 years ago on Amazon that was much better, but they're no longer available. I can tell a difference in the plastic piece in the middle. The older (higher quality one) is beveled on the sides and the newer ones are just flat all the way across.

I bought a cheap original 6-player adapter from yahoo auctions and used those ports as I had the same experience with the extension cable ports.

nnap said:
I bought a cheap original 6-player adapter from yahoo auctions and used those ports as I had the same experience with the extension cable ports.
Click to expand...

That's not a bad idea. Did they mount easily to the adapter pcb? I think the ports on an actual saturn are two in one molded piece so I assumed the multitap would be the same.
You must log in or register to reply here.
Menu
Log in
Register
Install the app
Top