I do understand the point of the thread as I made that point - that the thread was asking about monitors that could simply display CGA and EGA, not look good.

What I said after was in response to the "my LMD looked washed out compared to my PVM point".

My complaint of LMD to PVM is more about my supergun’s RGB output, not necessarily on lag or the LMDs overall contrast.

We are all arcade snobs here. So unless you are @jassin000, CRT is the only way to go. None of us would even consider playing our PCB's on an LCD without an external device.

Test Bench Application, Test Bench Application, And Test Bench Application is the point of this discussion. If that wasn't specifically stated, it is definitely implied given the nature of this forum. Small footprint on the test bench. Safe. Eliminates points of fault inherent when using a CRT in test bench purposes. Also, allows for testing JVS-based boards. The two principle applications are:
But back on topic. I swooped up an Acer G-Series for $5. Now need to find my Molex connectors to connect to my Craftymech TPG's harness. Will let you guys know if it digs Craftymech TPG 15khz & 25khz. Also, will check how it works with one of my PC Emu box.
Last edited: Feb 10, 2020

Been doing MAME builds for quite a looooooong time. This is by far, the most stable image produced on an LCD piped in straight from 15khz enabled MAME PC I've ever seen. No jitters, ringing, screen blinking to speak of. Launched a few games to test sync:

Matters little that those games don't sync up on an LCD for MAME application. What matters is I get a stable image in Windows to setup MAME. I am actually anxious for the next MAME build now. Won't miss seeing my monitor struggling to sync as I hit APPLY after enabling EDID. Woot! 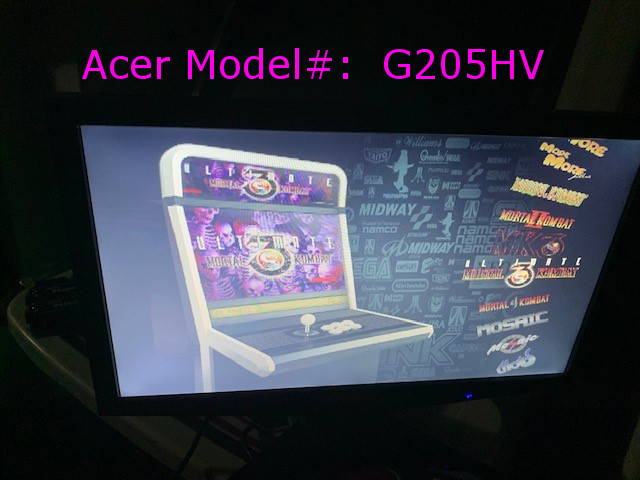 The best way to deal with the Midway family is OSSC directly into a freesync supporting LCD/IPS.
At one time I would recommend iScan DVDO's for sync adjustment, but this adds "Framemister" levels of lag (16ms+).

I've been told the Sony Wega CRT family also has problems with Midway.
So even in the magical zero-lag CRT world, Midway's 400x254@54.88Hz is just freak'n strange man.

Yeah Midway boards are the only thing that ever require adjustment of the VHold on my cab monitor.
Z

If it's literally just for testing to see if a PCB works then lag and image quality is irrelevant. Any of those cheap lcd arcade monitors are fine. They come with cheap CGA, EGA, VGA to HD upscalers.

There's little advantage to LCDs that can display CGA and EGA without an external scaler. It still has to scale the image internally. There is no such thing as native 240p on a 768p or 1080p flat screen.

Personally, I don't see the point in owning a monitor just for testing unless you fix PCBs for a living. If you enjoying playing then you should buy a proper crt arcade monitor and test on that when needed.

just spent the last few hours digging for the g-probe and g-wizard software that's used to program the Genesis based monitors.
I think i've got a pretty good idea of what we need to at least poke around with, but I need to actually get the software up and running... assuming I have all the bits...

It's really fun trying to track down software well after a company is dead and buried...
Click to expand...

defor said:
seems that the tools I got weren't what i was looking for.. damn.

So, from the datasheet: http://igorx.irk.ru/datasheet/4rtlyRzj2F9U0q0ljTN9.pdf


Genesis' said:
To program the gm5221 the content of the external ROM is generated using Genesis softwaredevelopment tools G-Wizard and OSD-Workbench. G-Wizard is a GUI-based tool for capturing systeminformation such as panel timing, support modes, system configuration, etc. OSD-Workbench is a GUIbased tool for defining OSD menus and functionality.

So, some rather interesting bits here...
I find it hilarious that you can apparently reprogram the controller from an attached pc- that sounds SUPER SECURE GOOD JOB GUYS...
Click to expand...

I'm interested in getting it to do test modes using a PC connected over DVI. Did you ever figure that out? Can you share the Gprobe and Gwizard software you found? Thanks!

Zebra said:
Personally, I don't see the point in owning a monitor just for testing unless you fix PCBs for a living. If you enjoying playing then you should buy a proper crt arcade monitor and test on that when needed.
Click to expand...

I also, personally, don't have a need for a test bench setup... Or IMO a CRT monitor, but thankfully the world is made out of more people than you or I.
Talented folks like @Hammy I'm sure will tell you if you lack a CGA monitor you have no biz not only in board repair/service but serious gaming.
It takes all kinds to make the world go round.

P.S. I'll upvote you, just to clear that negative to neutral. I know you are only expressing a POV, and you shouldn't be down-voted for that.
Last edited: Feb 26, 2020

It is, but he is still pretty new (under 500 posts) and I sometimes suffer from this myself (whats my excuse).

Everyday is a new start, to be the person you want to be and consider a perspective you might otherwise have not.

I was googling one of the LCD's in this thread and ran across some "modeline" entries on github which in turn lead me over to MythTV. Now I'm not sure if the word "modeline" is useful in google search to anyone but it has turned up some interesting things.

I want to add another...

Irata said:
Oh in chasing this one down above I found it's bigger brother 7.8" all over eBay but maybe someone can confirm if it will work or not?
Click to expand...

the document doesn't really have the info necessary to determine if it will work, or at least without some deeper knowledge of how sync signals work.

really most of these the documentation can't be fully trusted you just have to test and see.

I see in the manual these 7.8" LCD's also have touchscreen features.

Irata said:
I want to add another...

However mine hasn't arrived yet. They did go up on the darn price though by $14.00. My price was $63.93 total shipped see the math below

Edit x2 or 3?:
---
Oh in chasing this one down above I found it's bigger brother 7.8" all over eBay but maybe someone can confirm if it will work or not?

They are used in this fine piece of equipment below.

I have one of these 7 inch LCD screen that I use with my supergun, so I know for sure they work in 15khz. You can even toggle between 4:3 and 16:9 if you add a switch like I did for it.

Little bump but I love my Asus VG245 computer monitor for arcade stuff. I purchased mine from Best Buy in December 2019 when I was building a rig with my dad. It works with medium-resolution arcade games natively without issues, including Model 3. Even does 4:3 original aspect ratio. I should fashion a 5-pin JST NH connector to female VGA if it's possible, so I can play Model 2 games without the need of a converter board. Why it even syncs at all must be due to the support of AMD FreeSync technology. Wonder if monitors that support G-SYNC will fare the same...
I've also been told the Acer G185H monitor works with medium-resolution games, but unsure if it has 4:3 option. I'm not crazy about playing my driving games stretched either.

I got a similar 32” AOC monitor with AMD FreeSync tech. It does work wonders with 15khz- high resolution through HDMI though. VGA is still 480p and up. Pretty neat gaming monitor, not to mention, it has a great, sharp picture with great viewing angles. The only thing I don’t like about it is the “backlight bleed” when the screen is all black.

Franco23444 said:
I got a similar 32” AOC monitor with AMD FreeSync tech. It does work wonders with 15khz- high resolution through HDMI though. VGA is still 480p and up. Pretty neat gaming monitor, not to mention, it has a great, sharp picture with great viewing angles. The only thing I don’t like about it is the “backlight bleed” when the screen is all black.
Click to expand...

My brother's got a BenQ GC2870 and a curved Samsung display as part of his gaming setup; I should give them a whirl when he's working.
As a side story, the Gonbes's (unmodded) really have yucky input lag, that I've especially noticed in Sega Rally and Indy 500. The Asus only has 1ms of lag and it is almost like playing on an original CRT.

ConversusWV said:
As a side story, the Gonbes's (unmodded) really have yucky input lag, that I've especially noticed in Sega Rally and Indy 500. The Asus only has 1ms of lag and it is almost like playing on an original CRT.
Click to expand...

Yeah, they are terrible, I actually use the OSSC for my games and the results are astonishing. The only issue with using the ossc is the risk of burn in while playing interlaced games on some IPS monitors. The OSSC doesn’t have a frame buffer. I have tested some IPS monitors and they seem to suffer the most with interlaced images. The AOC monitor I have doesn’t suffer from this issue because it supposedly uses an VA panel.
You must log in or register to reply here.
Menu
Log in
Register
Install the app
Top