by the end of last year, I was able to purchase a Sega Naomi 2 with a Raspberry Pi (PiForce Tools 1.5 installed) and a NetDimm (firmware 3.17) Since the whole real arcade hardware was new to me, I had to buy several additional items afterwards (which I didn't knew back then I needed to even start things up...)

So, I bought a Sega I/O Board Rev. B, a Supergun (Retroelectronik), and for the Supergun+IO board a Pico PSU (PicoPSU-150-XT 150W 12V DC-DC ATX Power Supply)+ a good working supply and an ATX PSU for the power hungry Naomi 2 (it's a Corsair SF450).
The Raspberry Pi can be either connected to the Naomi 2 (I made a custom cable) or with a separate USB supply. (I tested both)

After the first start I decided to change the fans, since the Naomi 2 sits right next to me and I felt more like in an airport as supposed to be in my living room lol
So I also exchanged the fans inside with two Noctua NF-A4X10-FLX 5V for the GPUs and one Sunon MF60151V31000UA99 Fan 12 V DC 0.58 W for the case fan.

The good part is:

The bad part is:

None of the Naomi 2 games work.

I don't know what the problem is. It's driving me crazy since I did so much and I read this forum (and many others) for those parts. So I can't imagine it doesn't have enough power or that I did something wrong with the selection of items used inside the board. I also did a complete system check, and everything comes out as "GOOD".

The behavior is as follows:

When I start up a Naomi 2 game (for example Virtua Fighter 4 Evo) the games loads up, it checks the memory, and everything turns out as usual with the Naomi 1 and Atomiswave roms. However Virtua Fighter _always_ loads up a screen which checks for the network. Every single time. Even when I disable it in the Game assignment settings, it does it anyway. It's always loading "xxxx/3600", then tells me there was a problem. Precisely:

At the bottom it just tells me to either wait 30 seconds, or push start to load the game. Either one will load the game. However, after the SEGA Logo Screen, the Naomi 2 just freezes up. No matter what I do, change, or try, it always does the same. I see the credits on the upper left, and some crossed out icons on the bottom (if I disable the network and the CARD 1 / 2 Player in the game assignments, it doesn't show those icons, but even in the manual to the arcade game there is no mentioning of those icons anywhere)

Beach Striker doesn't even load the SEGA Logo, it just freezes in a white screen. Virtua Striker 3 loads up and shows even the full start up screen with animations and background and camera movement, but the first second I push start to begin the game, it freezes up too.

Now, I asked the seller what it could be. He responds with the fans must be the problem because they might consume too much power. Others on other platforms had similar issues, but they had in the end a dead fan. I opened up the board again to check if the fans keep spinning and they do (I also switched the cables so the Noctua has the same color coding as the originals) and all seems to spin and work correctly.

Since he said something about power - I can't imagine in any way how a 450V ATX PSU is too week to handle the Naomi. But because I don't know it, I wanted to list all the used items here in this thread, so maybe someone can tell me what I did wrong. The Naomi doesn't power the IO board. It is powered over JAMMA on the Supergun with the PicoPSU, and directly connected to the USB on the Naomi 2 front. I used one Brook PS4 to Neo Geo converter to hook up my Fight Stick, and that worked great on Dolphin Blue.

The Naomi 2 is connected over VGA to my OSSC in 31k mode. The Bios is a multi bios as far as I know (Dip Switches change the region) And the Picture / Audio is directly taken from the Naomi, not the Supergun.
The seller also told me it has nothing to do with the Supergun+IO combo... so I'm out of ideas.
Last edited: Jan 22, 2021
T

When trying to run a Naomi 2 game, what voltages are you getting when measuring at CN1 (its the power connector on front of Naomi system)?

Like @rolins is stating check your power as that set is really power hungry . And can freeze your games. And make sure games like Virtua fighter have in the game settings everything correct like stand alone in stead of online or vs link or maybe you just have a bad rom version. Try to load a diff version
G

try with an original SUN PSU.

Do you have a pic of the adaptor cable you are using to go from the ATX PSU to the Naomi?
No use to have a big beefy PSU if you have poor quality/too few lines to feed into the Naomi...

The seller is right abut the Supergun/IO situation. That is self powered and self contained. You just pass JVS data via the USB cable.
T

nam9 said:
Do you have a pic of the adaptor cable you are using to go from the ATX PSU to the Naomi?
No use to have a big beefy PSU if you have poor quality/too few lines to feed into the Naomi...

The seller is right abut the Supergun/IO situation. That is self powered and self contained. You just pass JVS data via the USB cable.
Click to expand...

The ATX adapter is this one here: 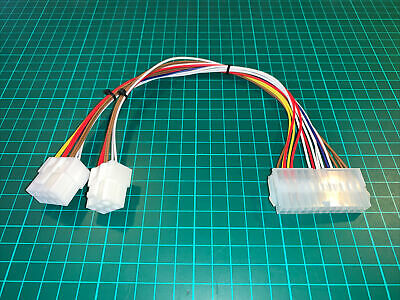 The Sueprgun/IO is working correctly over USB, otherwise games like VF4 would tel me to use an IO board first (plugged it out to see what happens and yeah...it just went into an error)

Currently I can't measure the voltage, have to do it the upcoming days. The seller is a really nice guy so I'm confident it is another flaw (it could also be the psu in general... I try to get another psu to test it out)

The roms I have to check anyway, since he put them on it and I want other roms anyway. He send me a video of his setups working though, so I guess it's not the roms.

Where do I change it to be stand alone instead of online? I disabled the network in the game assignment, but it doesn't save it. :/
You must log in or register to reply here.
Menu
Log in
Register
Install the app
Top