My Raiden Fighters board (SXX2D ver 2.1 motherboard plus euro region - Tunning licensee - cart) has been working well so far.

Unfortunately, a few days ago, the board booted with an error (the game is working with gfx issue - thin, horizontal lines on the entire screen).

First of all, I decided to check if the problem is in the motherboard or in the cart.

Additionally I tried to boot fully working RF2 cart on first motherboard - the system didnt boot at all. Next I attached RF cart to this motherboard and effect was the same - the first mobo looks dead (it worked before I disconnected RF cart to check it on second motherboard).

I have two question:

1.Has anyone tried to repair this system? Or even cart alone? Seibu spis system looks very unreliable - its easy to find ads for sale of non - working units...
2. Alternatively - I'm thinking about buying single-board version of Raiden Fighters (ver. 3.0 SXX2E). Any experinces with this one? Are they easily damaged? This version has yamaha sound unit - is the sound quality good? or poor as in these newer spi board versions?

Thank you for any help.

I have several spi motherboards that some of the pins on the customs has become loose on. Even getting a 4th (working) 2.0 motherboard today to test the carts with.

My rf2 cart also had loose pins on the big custom and 1 bg rom.

The issue is that is pins become loose and the game perhaps updates the flash incorrectly and causes a brick. And then you need to desolder and reflash u1053 with the correct region byte if that got corrupted.

I have heard that the region byte is programmed last.

I have a dentist tool (yeah really, it's awesome ) and a magnifying glass with light that I use to put just a tiny amount of pressure on the pins to see if they are loose.

Check the pins and resolder/reflow the customs. Just make sure you got a good soldering iron and preferably flux (not needed but make things easier.) Desolderbraid to clean bridges.

if you know the region of your motherboard you can always change region of the cart. I am not sure how 2.1 motherboards handle region changes.

Thank you for answer @bytestorm

OK - first - check and reflow customs pins. Now, after a closer look - I can see that someone has already reflow this board earlier...

If I bricked my first mobo (by flashing it incorrectly) only what I need to back it to life is to reflash u1053 ( https://postimg.cc/jLzS5DG5 ) simillar to changing cart region http://www.world-of-arcades.net/seibu_spi/?

BTW - what do you think about single-board version of Raiden Fighters (ver. 3.0 SXX2E)?

Yeah, check for loose pins on the cart. I even had a battle balls spi cart with cracked solderjoints on the big connectors, so check those to.

but you didnt get the other cart boot on this motherboard either?

last step, if all else fails would be to reflash the motherboard with the SAME region as your prg0 have (last byte in the bin).

I wonder if the cart would boot if you changed the prg0 last byte to 0xFF ? Since the flash would have that after a bad flashing... hmm

I havent tried the singlepcb versions.. only heard they have inferior sound so I stayed away.. I would love to hear if they really are THAT bad thou

Thank you - I'll try find loose pins first (before reflash u1053).
Yes - I tried to boot other euro cart on this unresponding euro motherboard - and...nothing.
Otherwise I am wondering about incorrect system update effect (in couse cutting the power while the game was doing it's initial load after changeing cartridges).
Some sources indicate that the effect of this is Hardware Error 81 but not complete system brick https://github.com/mamedev/mame/blob/master/src/mame/drivers/seibuspi.cpp

Singlepcb SPI version - from what I know there are two version of those: one with yamaha sound chip and other with oki sound chips (and this one have a terrible sound for sure).

chomponooch said:
Otherwise I am wondering about incorrect system update effect (in couse cutting the power while the game was doing it's initial load after changeing cartridges).
Some sources indicate that the effect of this is Hardware Error 81 but not complete system brick
Click to expand...

Yeah, I did this once. It will just show the error screen afterwards.

So not sure why, but today I had the idea of trying to fix my SPI motherboard. 10 years ago I purchased the board and Raiden Fighters 2. I bought a RF1 cart soon after, and knowing nothing about the system, I swapped the RF cart on it. The screen showed some kooky countdown from 1000, and I thought I had no time for that, and switched the cab off. After doing whatever I had to do at the time, I returned back to the cab, switched it on and it showed some Japanese text and a number. Later on I would learn that this was the Checksum error.

So today, I decided to hot air the chip off and erase it manually on my Superpro. I placed the hot aired chip on to a TSOP48 to DIP adapter and on the programmer: 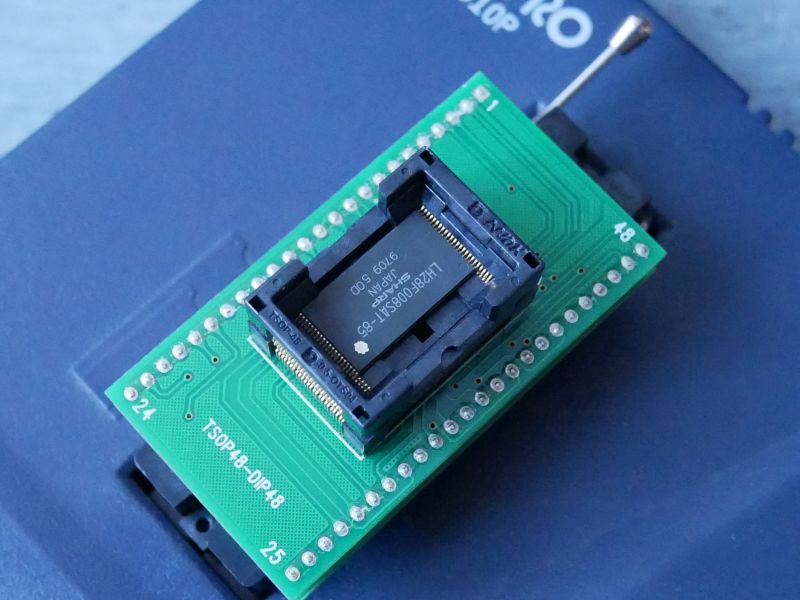 I erased it. Then I wrote '01', the code for Japan region, in the first byte. Read the chip back. Everything checks out.

I'm really bad at drag soldering SMD components, so I decided to hot air it back on. First time I tried this and I have to say, this might be the way to go for me. I didn't clean the pads at all. I carefully aligned it on to the pads, which can be a bit difficult, because the pads still had solder on them. Eventually got it, pressed it down with a flat head screwdriver, then heated up the legs: 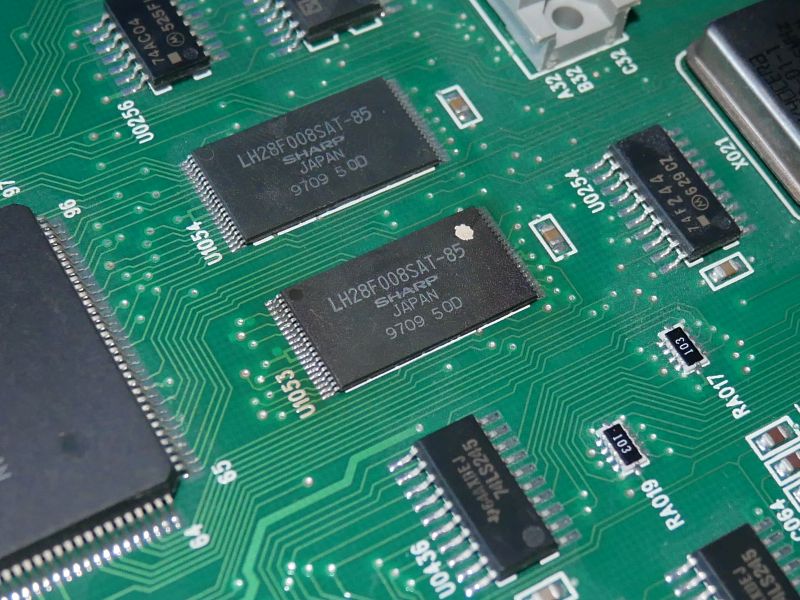 Connected the board on to a cab. Put Raiden Fighters 1 on it and let it boot. Countdown from 1000. Everything looks good: 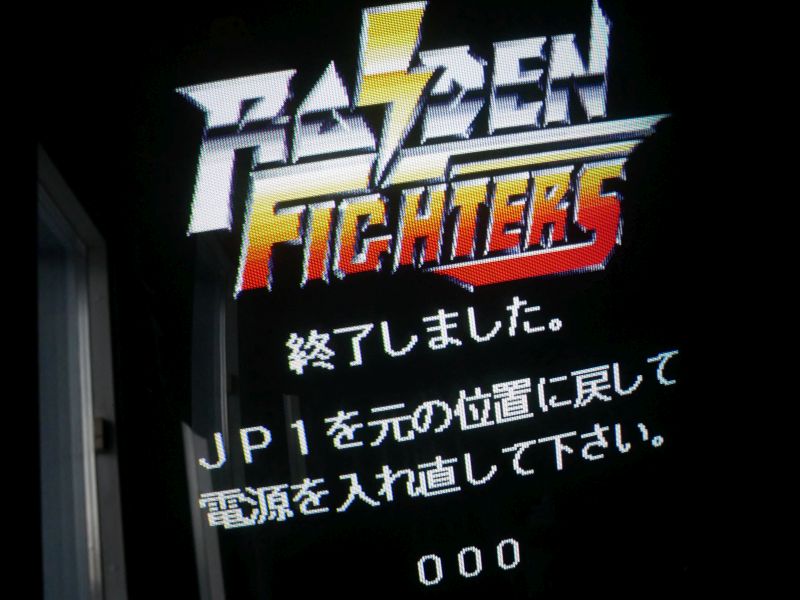 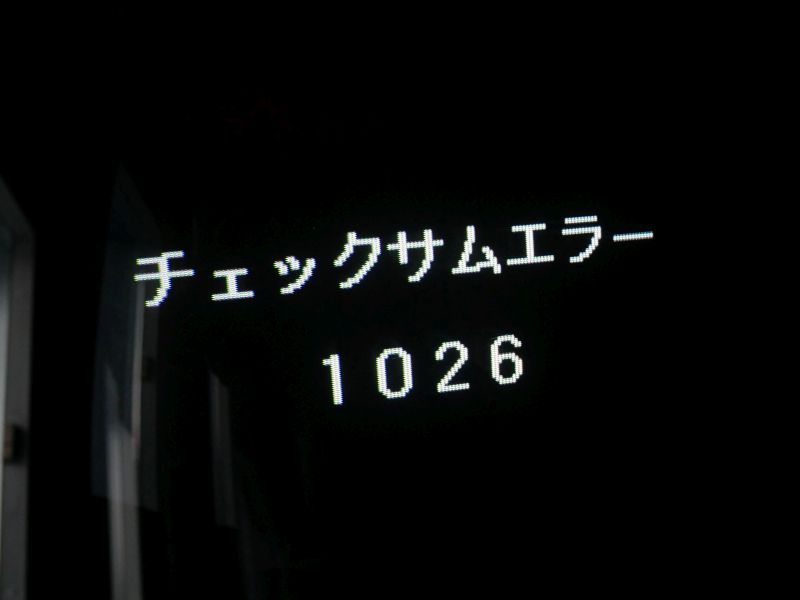 Same goddamn checksum error. Is the chip bad? Board trashed?

nem said:
10 years ago I purchased the board and Raiden Fighters 2. I bought a RF1 cart soon after, and knowing nothing about the system, I swapped the RF cart on it. The screen showed some kooky countdown from 1000, and I thought I had no time for that, and switched the cab off. After doing whatever I had to do at the time, I returned back to the cab, switched it on and it showed some Japanese text and a number.
Click to expand... 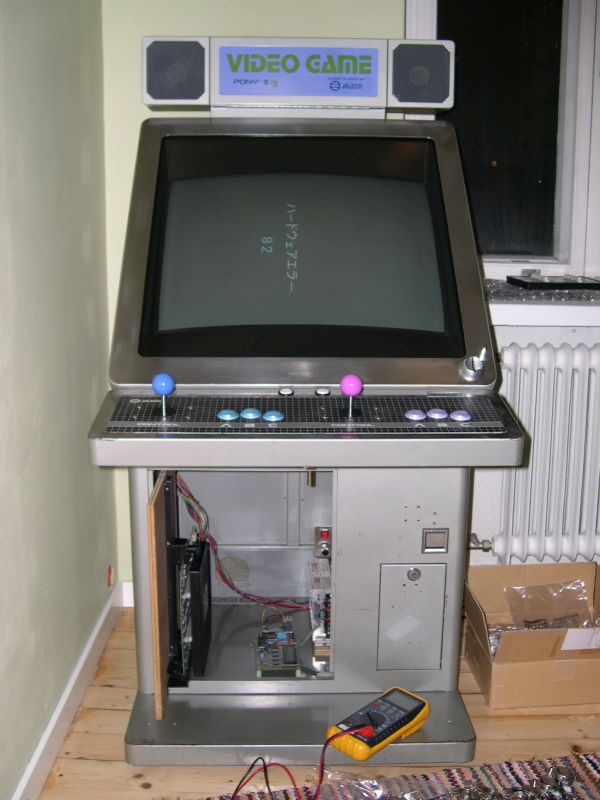 have you pulled the Program ROMs from the ROM board, dumped and confirmed that they're actually JP region?

are you abile to boot/complete a reflash using SPI revive?

there are two flashes so it's entirely possible that the OTHER chip you didn't pull is bad/failing the checksum, but I'd confirm the above first.

Do you have any other SPI carts to test?

after confirming the ROM region I'd probably try re-flowing the other flash chip, and failing that, pulling and replacing both of them.

chomponooch said:
board booted with an error (the game is working with gfx issue - thin, horizontal lines on the entire screen).
Click to expand...

I realize this post is about 2-years old now but I just wanted to comment for future posterity that 9 times out of 10 when I get vertical lines (horizontal line for vertical games) or dots in a grid it means that one of the pins of one of the graphics ROMs is bad.

Similarly I had this problem on a Batrider PCB and it ended up being a bad ROM... one of the pins was just dead, but it expressed itself the same way.

Had it happen on MVS carts too, and those have ranged from a dirty cart connector, to a bad solder joint, to a dead pin on a ROM.

I'm not saying it's always a pin on the ROM... but that's a damn good place to start.

twistedsymphony said:
have you pulled the Program ROMs from the ROM board, dumped and confirmed that they're actually JP region?
Click to expand...


twistedsymphony said:
are you abile to boot/complete a reflash using SPI revive?
Click to expand...

SPI Revive did do a complete flash when I tried it. Ultimately the board failed once I tried to flash a game on to it.


twistedsymphony said:
there are two flashes so it's entirely possible that the OTHER chip you didn't pull is bad/failing the checksum, but I'd confirm the above first.
Click to expand...

That's true. I'll hot air the other one off too and see what it does on the programmer.


twistedsymphony said:
Do you have any other SPI carts to test?
Click to expand...

I have a bunch. Raiden Fighters 1 is fine though, it works on my other motherboard.

That's good, it rules out the cart.

I could be wrong but from what I understand of the reflash process, it basically dumps the audio data to the flash, and then does a check-sum on the program data just to ensure that it's the correct game/region but doesn't actually write it... graphics data is always streamed directly from the cart and is not part of the flash process.

if the flashes are good then I would think the next culprit would likely be whatever logic ICs are between the flash ROMs and the CPU that calculates the checksum.

EDIT:
I just had another thought... maybe reflow the connector for the cart on the mobo, specifically any pins attached to the audio roms. if one of the pins for ROM data is bad it could essentially cause the data to be written incorrectly to an otherwise perfectly fine flash-rom.

I took out U1053 and read it with the programmer. The data was garbage, and the first byte was definitely not 01 anymore. The chip is fine though. I reprogrammed it multiple times and read it back, it verified every time.

According to this post by channelmaniac , the Yamaha chip controls access to the flash. I tried looking for lifted pins, but couldn't find any with a toothpick.

I booted up a Senkyu cart, it just kept telling me to switch JP1. There's no JP1 on the SXX2D. Other carts are now giving me a checksum error again.

I'm sure it's a lifted pin or pins somewhere, or like you said, a poor solder joint on the connectors. Getting the cart off can be a pain, and you can inadvertently flex the board really easily.

I'm giving up. If anyone here wants the board, let me know.

I'd take it... but I'd probably end up dumping a couple hours into it, giving up also, and then sending it to @Hammy anyway (so I might as well just tag him so he sees your offer and pick it up himself if he wants it).

You know me, i'll take junk boards all day long

Same matter with a Jet , is there somebody able to repair it ?
You must log in or register to reply here.
Menu
Log in
Register
Install the app
Top