Seta Aleck jamma board to Nintendo 64

So I own 2 Seta aleck64 jamma boards 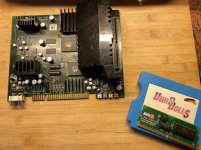 the boards are based on the Nintendo 64 architecture and a few games came out on it. Most people don’t even know this board exists. Also there were not many good games on it

so last week i open up the card (vivid dolls) 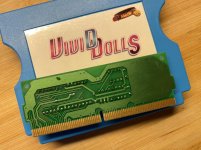 and I had a look at the pcb. I see that the chips look the same as the Nintendo 64 card but the plug in board is totally different. As you can see Here 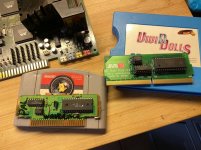 so I desolder the vivid dolls and inserted the chips from a pal wave race. Just black screen no luck. Then I realized that pal cards won’t work on a USA/JAP system and just gave a black screen. So I ordered a cheap japan card and took of the chips again and BEHOLD!!!!
The jamma system booted up with the most crips/sharp and vibrant Picture I have ever seen on a Nintendo 64 game! And Perfect sounds 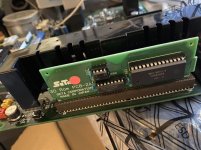 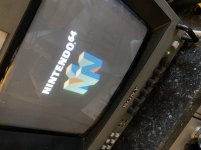 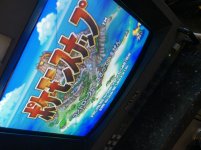 Controlls digital don’t work yet. Analoge does If I use a test program on the analoge input on the alex64

Wil upload a movie later on this spot

That's pretty funny that it works as is.

The Mame driver mentions you have to patch Eleven Beat to run in a N64 emulator:

@nem yup seen that also they mention it’s not compatible with normal n64 cards well that just got debunked! Haha also it’s amazing how crisp the image is. Normal n64 is a tat soft picture wise

that saying I only try 2 games now and they both work . So maybe some larger games won’t boot don’t know as of yet also want to try a game that’s need that grafic expansion shizzle maybe you don’t need it on this board

I guess they could just mean the edge connector is different.

Anyway, someone needs to make an adapter for N64 carts to Aleck64 (well, an Everdrive really) and figure out the controls. There's a few games that would work great on a cab, like Rakugakids and Mischief Makers.
Last edited: Jan 9, 2021

@nem yes maybe that’s what they trying to say

Pretty cool. Considering that the game pcb looks simple to replicate, i'm pretty sure you can make star soldier carts like a machine gun. N64 repros are all over the place and well documented.
I aslo think it's the only game worth a try, speaking of alek64 romset.
X

I have a Star Soldier cart but no motherboard or control panel, I might need to track them down

@xodaraP the controll panel is on eBay. It connects to the 4 player analog input on the aleck board. I think any analog stick can be used on it. I will check it this week and let you know the outcome

NICE WORK
I had suspected this was the case and even started a thread about it a while ago: https://www.arcade-projects.com/threads/n64-carts-on-seta-aleck64-hardware.12153/

I didn't even think about ROM swapping from one of the similar games. Honestly I'm surprised how it just WORKs lol.

@twistedsymphony wow never knew you already started to look in to this! Cool

I think if everdrive was able to emulate the CIC on the Aleck64 carts and there was a cart adatper we'd have a multi ready to go!

Alternatively the everdrive games could be patched to use a different CIC (or maybe they already have?) then we'd just need the adapter

I'm unsure if JAMMA controls would work but this mobo has connectors that appear to be (at least electrically) N64-controller ports. this is what is used for the analog control panel interface boards, which are also branded as "N64" PCBs. would be very cool to build essentially an N64 arcade machine with analog support and everything.

Exactly! I will get to work this week. If you find something out in the meantime let me know and maybe we can make a new multi!

Aleck64 is how I got into dumping games for MAME. I had bought Eleven Beat off eBay and mentioned it on IRC. Someone replied that the dump in MAME was bad, and that started a long adventure! It was then discovered that almost all the Aleck64 dumps were bad, so over the course a few years that was fixed. During that time I worked with mikeryan and some others to dump and reverse engineer the CIC-5101 (REcon 2015 Talk).

So yeah you can play certain N64 games doing a maskrom swap as AMS has demonstrated. I believe only eleven beat and vivid dolls use this basic cart type, the rest of the Aleck64 games used more complex cartridge designs with a bootloader maskrom and additional logic. The 4 x 3 pin inputs on the E92 board are compatible with standard N64 controllers. Some games will not work using this mask rom swap as they depend on the correct CIC being used.

lord...count me in as one of those people that never knew this thing existed- but the n64 is my absolute favorite console strictly because I have a rather unhealthy love for the game mischief makers lol. If whatever this sorcery this is means that I could -technically- have an arcade version of mischief makers...I can't find one of these boards fast enough lmao. This has suddenly turned into a bit of a grail for me with the potential for jamma mischief makers...how much do one of these base motherboards usually run?

And here’s the control panel: https://www.tops-game.jp/products/detail.php?product_id=4623

dang; done and done then. I just found a mahjong aleck game on yaj the other day, but didn't pay it much mind since it's "just another arcade mahjong listing". The control panel is super interesting- I'll probably bite, but since mischief makers doesn't use the analog stick at all...would I even need this? Obviously based on the info in this and twisteds thread, it's total conjecture atm on whether anything further actually happens with this board and playing real n64 carts, but I guess I'm just speculating incase theres a bright future haha
Last edited: Jan 10, 2021

If you want to play N64 games in an arcade cabinet, the easier proven path is "JAMMA-fying" a retail N64. This is something that has been done since the 90s, check out this thread https://www.arcade-projects.com/thr...-consoles-to-your-jamma-arcade-cabinet.10074/ or google "JammaCon".

One of the first reasons I got my eye on the Aleck64 was to play Mario Kart 64 on "arcade hardware", but then I realized at least for MK64 it would require rom hacking and a building a custom cartridge.... and so I just ended up jammafying a n64 and it works great.
You must log in or register to reply here.
Menu
Log in
Register
Install the app
Top